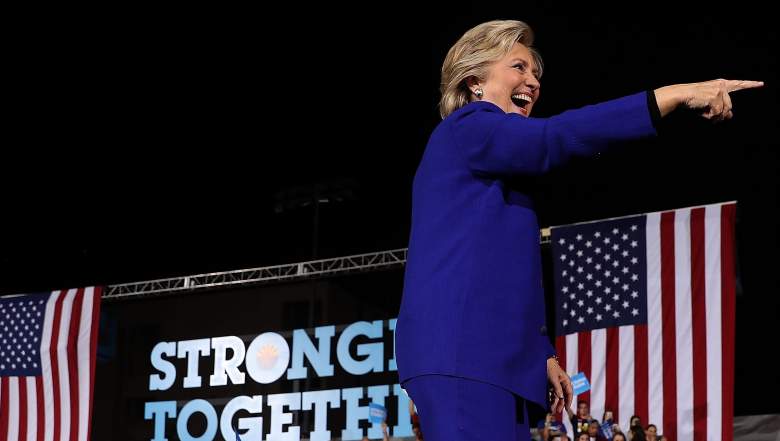 Although Nevada went for George W. Bush in 2000 and 2004, it has been turning more and more blue over the past decade, with Barack Obama defeating Mitt Romney there by six percentage points in 2012. And the state now has 586,000 registered Democrats compared to 494,000 registered Republicans, a lead of 92,000 voters, according to statistics from the Nevada Secretary of State.

The Donald Trump campaign has hoped to challenge Hillary Clinton in Nevada, and recent polls have shown him catching up to her. In Real Clear Politics‘ Nevada polling average, Trump currently leads Clinton by 2.0 percentage points. The Trump campaign has made several visits to Nevada over the past few weeks, and one of his final rallies of the campaign will be held in Reno. And a map recently sent out by the Trump campaign in a fundraising email has Nevada listed as leaning Republican. Clearly, his team sees this state as essential.

Yet the early voting numbers we have seen show that it will be very, very difficult for Donald Trump to win in Nevada, a state without which his path to 270 Electoral Votes becomes slimmer than ever.

According to the Nevada Secretary of State’s official report, as of November 3rd, about 622,000 people have voted early in Nevada. The state currently estimates its active voter population to be 1.2 million, so this would mean that over half of Nevada’s active voters have participated in the 2016 election already. Thus far, Democrats maintain a lead of about 33,000 votes, which translates into a statewide lead of 42 percent Democrat to 37 percent Republican.

To put this in perspective, this Democratic lead is down just a bit from 2012, but not enough to be all that significant. At this point in early voting in 2012, the Democrats were ahead of the Republicans 45 percent to 37 percent.

Clinton is doing particularly doing well in Clark County, where over 60 percent of Nevada’s active voters live. In this county, she is leading Trump by about 14 percentage points.

As FiveThirtyEight observes, Nevada is a state where the early voting numbers are more predictive of the final result than in other states because here, the majority of votes are cast prior to Election Day. In 2012, 69 percent of the total votes came before Election Day. This suggests that if Clinton wins in Nevada’s early voting, she will likely win the state, and she’ll win it by about the same margin by which she is ahead in early voting. There is just one day left to vote early in Nevada, so it would be surprising to see the numbers shift dramatically from where they are now.

Of course, we don’t actually know which candidate these early voters are choosing; we just know what political party they are registered to. But polls have shown that the overwhelming majority of Democrats will vote for Clinton, and the overwhelming majority of Republicans will vote for Trump. A recent CNN/ORC poll found that 93 percent of Nevada Democrats plan to vote for Hillary Clinton, and 96 percent of Nevada Republicans plan to vote for Donald Trump.

In his analysis of the state’s early voting data, reporter Jon Ralston concludes that as of Thursday night, there is now almost no way Clinton can lose Nevada.

“If Clinton holds her base here (data I have seen shows she is, and minority turnout is going up) and turnout patterns don’t dramatically shift in the last two days of early voting, she can’t lose Nevada,” he wrote on Thursday night.

This is great news for the Hillary Clinton campaign not because she needs to win Nevada, but because Donald Trump needs to win it. His pathway to victory is so narrow that losing just a single swing stage will be a crushing blow. In FiveThirtyEight’s model of the election, Donald Trump currently has a 33.5 percent chance of winning the election. But if he loses Nevada, as these early voting totals suggest he will, his chances of becoming president shrink to nine percent.