President-Elect Donald Trump will speak today at the Indiana Carrier plant where he and his running made reached a deal to save jobs.

Trump is scheduled to speak at 2:00 p.m. Eastern Time, and he will be joined by Vice President-Elect Mike Pence. The event is not open to the public, but it can be viewed in the embedded YouTube player via Right Side Broadcasting.

Carrier announced this week that it will keep about 1,000 jobs at its plant in Indiana rather than firing workers and moving production to Mexico as originally planned. Trump had criticized Carrier’s decision to move to Mexico during the campaign trail and promised he would make a deal to keep these jobs in the U.S.

Carrier said in a statement that they reached a deal with President-Elect Donald Trump and Indiana Governor Mike Pence. Details of the deal were not made public, although Carrier did say that Indiana state incentives were a significant factor in their decision to stay.

However, hundreds are still expected to lose their jobs, and the 1,000 jobs figure Carrier provided also includes headquarters and engineering staff that were most likely going to remain in Indiana anyway, according to Fox News.

Many around the country are asking questions about this deal, as are many employees at the Indiana plant, and so presumably Trump and Pence will address some of these questions on Thursday.

This visit to Carrier comes a few hours ahead of the beginning of Trump’s victory tour; he will soon be shifting back into campaign mode and holding rallies in several swing states that helped him the election, starting tonight at 7:00 p.m. in Cincinnati, Ohio. 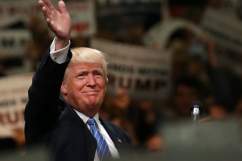 Loading more stories
wpDiscuz
0
0
Would love your thoughts, please comment.x
()
x
| Reply
President-Elect Donald Trump will speak today at the Indiana Carrier plant where he and his running made reached a deal to save jobs.