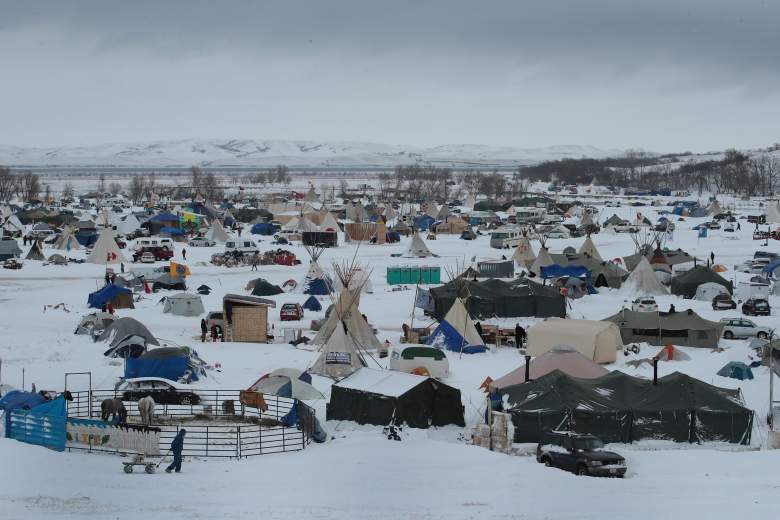 The DAPL will be rerouted. (Getty)

The Water Protectors of Standing Rock received long-awaited and welcome news today: the easement to finish the Dakota Access Pipeline has not been granted. The Army Corp of Engineers announced that work on the DAPL will be halted, and the current route for the pipeline will be denied, MSNBC announced. (To see memes and photos celebrating the announcement, please see Heavy’s story here.)

The 1,172-mile pipeline was almost complete except for a small part under the Missouri River reservoir. Water protesters have been camped out in the area day and night, seeking to protect their sacred land and the waters from pollution. The Army Corps Of Engineers denied the easement and will, instead, look into rerouting the pipeline. They also called for an Environmental Impact Study on the project.

The Army’s Assistant Secretary for Civil Works, Jo-Ellen Darcy, said in a statement:

Although we have had continuing discussion and exchanges of new information with the Standing Rock Sioux and Dakota Access, it’s clear that there’s more work to do. The best way to complete that work responsibly and expeditiously is to explore alternate routes for the pipeline crossing.”

Jordan Chariton from The Young Turks shared the news live as soon as it was announced:

Reactions have been swift to the welcome news, with people all over social media rejoicing. The decision came on the same day that 2,000 military veterans arrived at Standing Rock to protect the sacred land. Sen. Tulsi Gabbard was among the veterans who arrived.

Water protectors and #NoDAPL supporters do warn, however, that supporters of Standing Rock shouldn’t let down their guard quite yet. Energy Transfer Partners might try to appeal the decision. And President-Elect Donald Trump’s team had said a couple days ago that he supported the pipeline based on policy, not his investments, PBS reported.

Here are some more reactions online, as people celebrate the news:

Never let anyone tell you things can't be changed for the better, #standingrock are a shining example..Overjoyed! #WaterIsLife https://t.co/Ucaf2LSdKT

#StandingRock #protectors stood their ground and won the battle. I STAND WITH YOU! I'm so proud of your conviction #youROCK #NativeAmericans

#NoDAPL!!! Shocked but so happy. Thank you to the protestors at #standingrock who have shown fortitude beyond belief. #waterislife

Don't ever say protesting doesn't work! I'm so pleased for you all ?❤️ #standingrock #NoDAPL

Bernie Sanders at the Standing Rock Rally: The Photos You Need to See

Dakota Access Pipeline Protests: The Photos You Need to See

Read More
Breaking News
The latest news on Standing Rock is that the Dakota Access Pipeline will be rerouted. The decision was made shortly after 2,000 veterans arrived on the site.