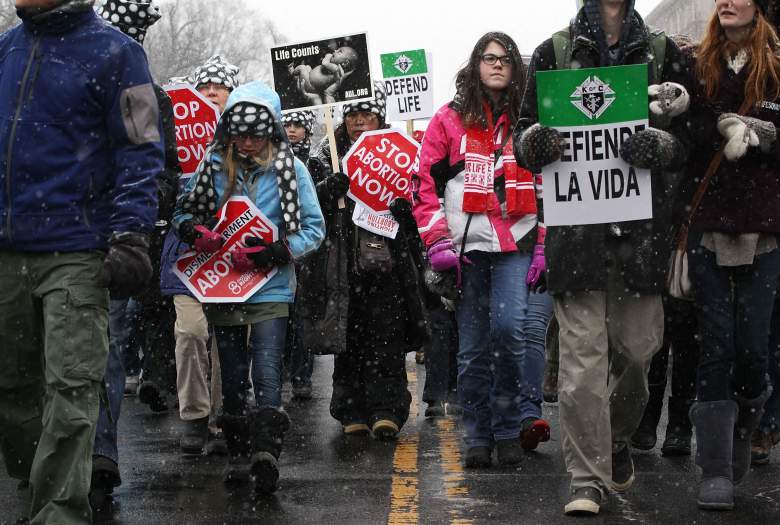 Tens of thousands of people are expected to participate in this year’s March for Life on January 27th in Washington, D.C.

The March for Life is an annual anti-abortion rally that takes place on or around the anniversary of Roe v. Wade, the landmark 1973 Supreme Court decision that said a woman has a right to have an abortion. This year’s rally has earned more attention than usual because the vice president of the United States, Mike Pence, will attend, and President Donald Trump will reportedly call in.

Here’s what you need to know about the 2017 March for Life.

1. It Starts at Noon on the Grounds of the Washington Monument 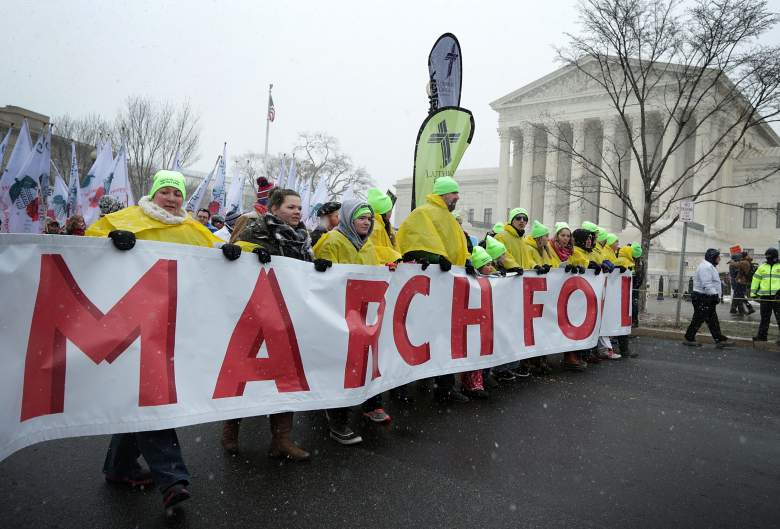 The March for Life begins at the grounds of the Washington Monument. (Getty)

The 2017 March for Life begins at 12:00 p.m. Eastern Time on the grounds of the Washington Monument.

This rally portion of the event will last for one hour, with several politicians and religious figures speaking. At 1:00 p.m. Eastern Time, the march itself will begin; it will go up Constitution Avenue to the Supreme Court and the Capitol Building.

At 3:00 p.m., protesters will listen to testimonies outside of the Supreme Court building.

You can watch the entire event online here: 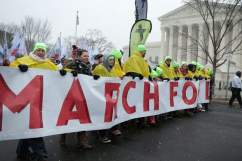 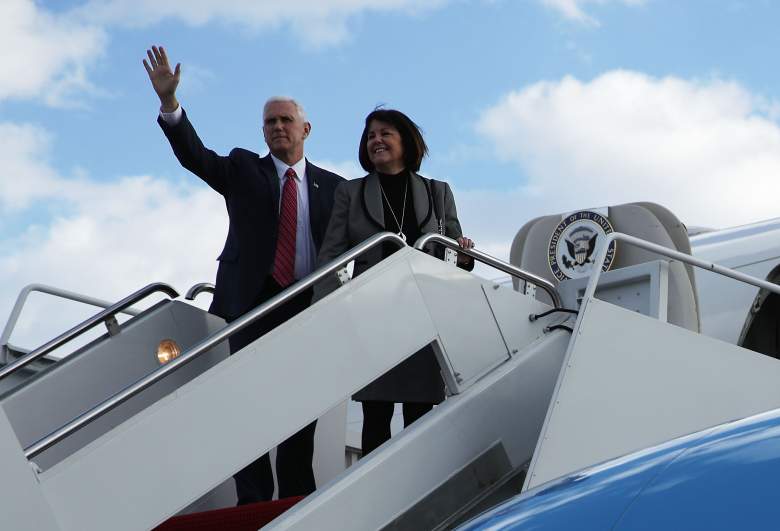 There are currently 11 speakers lined up for the rally portion of the March for Life, with the biggest name being Vice President Mike Pence; he was just added to the event on Thursday morning. Vice President Pence has had a consistently pro-life record throughout his political career, especially when he was governor of Indiana; in 2016, he signed into law House Bill 1337, which, among other restrictions, bars doctors from performing abortions for women who are seeking them due to fetal abnormalities. The law was later blocked by a federal judge.

This is the first time a vice president has ever attended the March for Life. No president has attended, although a few have delivered remarks remotely.

Also speaking will be Kellyanne Conway, senior counselor to President Donald Trump. She is the first woman to ever run a successful presidential campaign in the United States.

The rest of the day’s speakers will be: 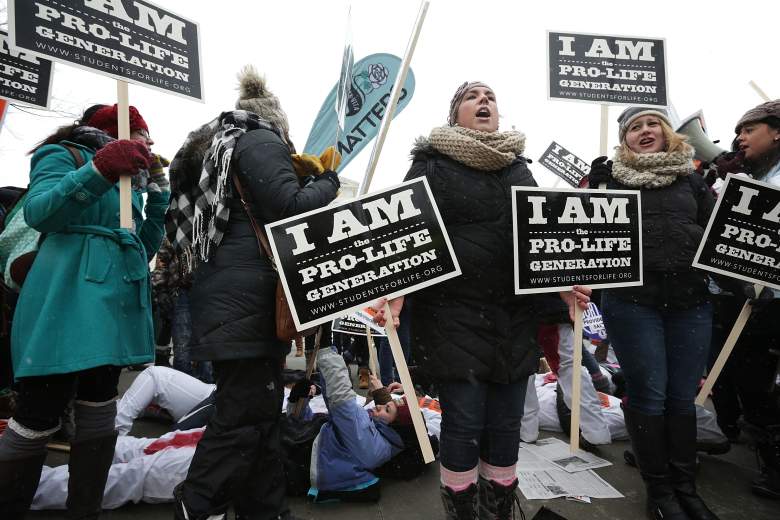 Pro-life activists hold up signs at the 2016 March for Life event. (Getty)

The 2017 March for Life has a theme this year of “The Power of One.” On its social media pages, the organization has described this as the idea that one person can make a difference in the world and that babies that are aborted don’t have the chance to do so.

Through its website, the March for Life has been asking participants to send in stories of how someone has impacted them with the cause of life or how they personally made a difference in their community for life. Many of these submissions come from people who were put in a situation where they considered getting an abortion but decided against it.

One story, for example, is from a woman who says she got pregnant at the age of 19 and went to Planned Parenthood to receive an abortion, but she says she instantly regretted it as soon as she took the first of two pills.

“I looked online for help, but found nothing until I finally came across abortionpillreversal.com,” she writes. “The site offered a hotline number, and when I called, a nurse from a pregnancy center answered and explained that a regimen had just been released to reverse the abortion pill I had taken. I knew it wasn’t certain to work, but I was desperate. She found (and I drove) to a doctor 2 hours away who began progesterone injections, which I continued for weeks, as we tried to save my baby. Despite the abortion clinic calling and saying that this would not work, I continued on with my pregnancy, and my second son, Zechariah, was born on 10/20/2013.”

4. This is the 44th Consecutive March 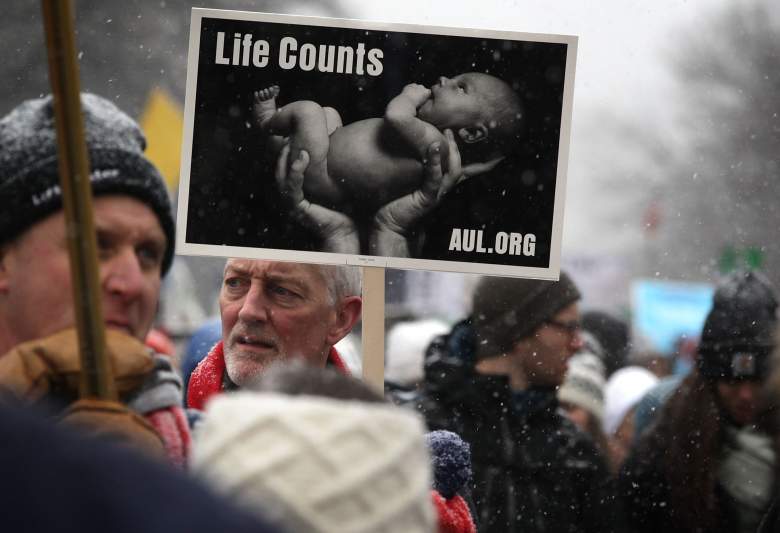 The March for Life has taken place every year since 1974. (Getty)

The March for Life has been taking place every year for the past four decades.

The general goal of the march is always to advocate for the overturning of Roe v. Wade, although some years there are more immediate causes to rally for, such as in 2009 when Congress introduced the Freedom of Choice Act, which would declare that every woman has the fundamental right to receive an abortion without restriction. This bill was not ultimately signed into law. This year, President Trump’s forthcoming Supreme Court nominee announcement will certainly be on the minds of all in attendance.

Although no president has ever appeared at the march in person, some previous Republican presidents have supported the event, and President Ronald Reagan and President George W. Bush spoke remotely. 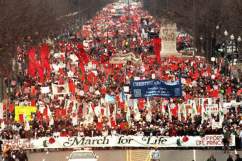 President Donald Trump in recent days has been plugging the March for Life in response to the Women’s March on Washington, saying that the media refuses to cover the anti-abortion rally.

“The crowds were large, but you will have a large crowd on Friday, too, which is mostly pro-life people,” Trump said in an interview with ABC News on Thursday. “You’re going to have a lot of people coming Friday. And I will say this, and I didn’t realize this, but I was told, you will have a very large crowd of people. I don’t know as large or larger. Some people said it will be larger. Pro-life people and they say the press doesn’t cover them.”

Trump again mentioned the march during a speech at a Republican retreat in Philadelphia on Thursday afternoon, saying that the event will be huge and that the press won’t cover it.

It’s not clear how many people will turn out for the March for Life; organizers told The New York Times that they have no way of gauging how many will be there but that they estimate there will be tens of thousands.