During his cabinet hearing on Wednesday, secretary of state nominee Rex Tillerson did not rule out the possibility that he would support a national registry of American Muslims.

Tillerson was asked on Wednesday afternoon, “Do you support creating a national registry for American Muslims?” The former ExxonMobil CEO did not rule out the possibility that he would support this but said he would need more information.

“I would need to have a lot more information around how such an approach would even be constructed, and if it were a tool for vetting, then it probably extends to other people as well, other groups that are threats to the U.S,” Tillerson said.

This noncommittal answer stands in contrast with the answers of other cabinet nominees who have been asked that same question this week. On Tuesday, John Kelly, Trump’s nominee for secretary of Homeland Security, flatly rejected the idea of a national registry of Muslims.

“I don’t agree with registering people based on [ethnicity] or religion or anything like that,” Kelly said.

“I would not favor a registry of Muslims in the United States,” Sessions said during his confirmation hearing.

Trump was then asked in an interview with NBC News, “[I]s there going to be a database that tracks the Muslims here in this country?” Trump said, “Oh I would certainly implement that. Absolutely.”

After facing backlash for this comment, Trump took to Twitter to say that he was not the one who suggested the idea and that he was just responding to a reporter. However, he didn’t actually take back his statement.

I didn't suggest a database-a reporter did. We must defeat Islamic terrorism & have surveillance, including a watch list, to protect America

Later, when asked by ABC News if he would rule out a Muslim registry, Trump said, “No, not at all.”

Members of Trump’s staff have since said that Trump does not support a Muslim registry and have denied that Trump suggested that he supports one.

“President-elect Trump has never advocated for any registry or system that tracks individuals based on their religion, and to imply otherwise is completely false,” Jason Miller, Communications Director of the Presidential Transition Team, said in a statement in November 2016.

However, Trump himself has never said that he does not support the implementation of a national registry of Muslims. The closest he came to addressing that question in recent weeks came last month; when Trump was asked in December if he still supports a registry of Muslims and the ban of Muslim immigration into the United States, he said, “You’ve known my plans all along. I’ve been proven to be right — 100 percent correct.” 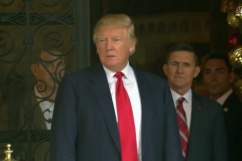 Loading more stories
wpDiscuz
4
0
Would love your thoughts, please comment.x
()
x
| Reply
During his confirmation hearing today, Rex Tillerson did not rule out the possibility that he would support a national registry of Muslims.