The family of a 17-year-old transgender boy says he was forced to wrestle girls in a state championship tournament. Mack Beggs of Euless Trinity high school in Cypress, Texas, completed an undefeated season on the night of February 25 winning the championship. The match took place at the Berry Center in the Houston suburbs.

According to the Associated Press report on the event, “Beggs fell to his knees for a moment after the win as a mixture of cheers and boos rained down on him.” The report adds that Beggs “hugged his coach and left the mat.” As he posed with his fellow winners, Beggs did a dab in celebration.

1. Beggs Began His Transition From Girl to Boy in 2015

According to posts on his Facebook page, Beggs began his transition from female to male in October 2015. Those updates indicate that the transition involved testosterone injections. He said in a video at the time, “Everything is great. The message I’m trying to send, the overall universal message I would say to y’all is don’t give up and don’t give up on yourself because you don’t know when you’ll find yourself.”

This was the message Mack posted to his Facebook page after his victory:

Beggs’ grandmother told the Dallas Morning News that the teenager “wants to compete against boys.” 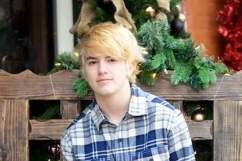 2. Texas Student-Athletes Have to Compete as The Sex Given on Their Birth Certificate

The University Interscholastic League is the body behind forcing Mack to compete in the female division. UIL deputy director Jamey Harrison told the AP, “Nothing that has happened at this year’s wrestling championships has the UIL reconsidering its rules because quite frankly we don’t believe that any issues being reported on are really a product of UIL rules.”

The Dallas Morning News refers to the UIL’s rules on gender identification as being “panned.” A psychologist from the Child and Adolescent Gender Center in California, Diane Ehrensaft, told the newspaper, “Not every kid I’ve seen who has gone on testosterone has added muscle mass.”

If U booed Mack Beggs: The UIL birth cert.rule made him wrestle girls when he wanted to wrestle boys. At NCAA level, he'd wrestle boys

In February 2016, the Dallas News reported on a vote by Texas school’s superintendents on forcing students compete as the gender listed on their birth certificate. It was passed with 95 percent. Chris Mosier, of TransAthelete.com, told the newspaper that because of the passing, “Texas now becomes one of the most restrictive states in the nation for transgender athletic participation.”

Transgender athlete Mack Beggs is about to compete for Texas HS championship. He wants to wrestle boys, but rules say he must wrestle girls. pic.twitter.com/RWkYJ8I060

Meanwhile, a local lawyer, James Baudhuin, told the AP has been trying to get injunctions against Beggs. Baudhuin told the agency that he doesn’t blame Beggs for the problems but the UIL. He is the parent of a female wrestler at another high school in the area.

The Dallas Morning News reports that the injunction was based on the fact that female wrestlers faced the “imminent threat of bodily harm.”

After witnessing Mack’s victory over Chelsea Sanchez in the 100-pound weight class, a man referred to as a “longtime Texas wrestling coach,” told the Washington Post, “I just witnessed my sport change.”

Mother of Mack Beggs' opponent says she wanted her daughter to forfeit because of Beggs' steroid use. pic.twitter.com/q3JGk3o2xI

On his Max Preps page, it shows that Mack is unbeaten in 52 matches against female competitors.

The 102-pound weight class female champion, Destiny Dominguez, told the Dallas Morning News, “It’s nothing strength-wise as a wrestler. It’s not how strong you are. It’s your mentality, how you wrestle.”

3. Beggs Is in a Relationship With a Girl From a Neighboring High School

Since 2014, Beggs has been in a relationship with Hannah Jones. She is a student at Timber Creek High School. Beggs calls himself a Christian on his Facebook page. He writes, “On the grind to be the best. Number 1! Wrestling is my life.”

The caption for this photo posted on Beggs’ mother’s Facebook page reads, “God sent me a husband that loves my kids unconditionally! He is so proud and how lucky am I to have such a huge big family.”

His mother, Angela McNews, writes on her Facebook page, “The proud momma of 5 beautiful kids and married to an incredible man of God!” Her husband, Damon McNew, is not Beggs’ father.

4. Beggs’ Legal Guardian Is His Grandmother

Beggs’ legal guardian is his grandmother, Nancy Beggs. She told the Washington Post prior to her grandson’s victory, “It’s only getting started. Mack is ready for it.”

Mack Beggs' parents are ready to cheer him on in his third bout at state, wearing shirts that say, "Mack Attack" pic.twitter.com/QJFAXxUrv0

The Dallas News reports that Begg’s family watched his victory while donning shirts that read, “Mack Attack.” The same report notes that his family nor his coach have been talking to reporters in the lead-up to the event.

5. Beggs Has Been Attracting the Ire of Conservatives on Twitter

Everything Trump does is vindicated two days later. https://t.co/wByMVFjOxc

Since Beggs’ victory, he has been attracting the ire of conservatives on Twitter. While speaking to the Washington Post, the mother of another wrestler who was present during the February 25 tournament, criticized Beggs saying, “She’s standing there holding her head high like she’s the winner. She’s not winning. She’s cheating.” The mother, named as Patti Overstreet, added, “It’s not equal. It’s never going to be equal.”

Loading more stories
wpDiscuz
30
0
Would love your thoughts, please comment.x
()
x
| Reply
The family of a 17-year-old transgender boy says he was forced to wrestle girls in a state championship tournament.