Peaceful Fruits, organic snacks made from wild acai from the Amazon rainforest, entered the Shark Tank in Season 8.

We interviewed founder Evan Delahanty, who got the idea while serving in the Peace Corps. He told us that the healthy snacks are available at local grocery stores and cafes, but will launch in Whole Foods soon.

And what did he think about right before he faced the Sharks? “I have to say, what I was thinking about was all the other heavy hitters I’ve faced so far. Anacondas in the Amazon, Olympians in my competitive martial arts days, or AJ, my first helper, who has Down Syndrome. With all of them behind me, I felt strong and ready stepping out in front of the Sharks!”

And as for his future plans, he said he will be launching five new flavors in the next couple of months.

I was a Peace Corps volunteer in Suriname, a little country in the Amazon rainforest of South America. I lived in a small village in the middle of the virgin rainforest – no running water, barely any electricity. The people face hard decisions every day and the trick to all successful projects is to make the right long-term decision make sense for folks in the short term. For example, we introduced people to small solar power devices to replace kerosene lamps in their homes. Big ideas about cleaner air, reduced fire risk, and lower lifetime cost (because no kerosene to buy) are good on paper, but to get people engaged, tell them they can charge cellphones and do homework anytime. Peaceful Fruits is about that same idea – let’s make it easy for people to do the right thing. That means healthy food should taste good! It also means we offer partners in the Amazon and in Akron, Ohio a way to make a living that embraces environmental sustainability and a basic respect for who they are. Finally, it also means embracing the profit motive. As a for profit social enterprise, Peaceful Fruits wants to offer a fair deal – for communities in the Amazon who harvest acai rather than letting in loggers, all the way to consumers who get a higher value product with higher values for a slight premium.

Acai is a superfood berry from the Amazon, known as one of the best sources of antioxidants, which studies have linked to anti-aging and cancer prevention due to the reduction of free radicals in the body. Additionally, as a great source of healthy fat and amino acids, acai offers nutrition-dense sustaining energy. And, at the same time, it’s a renewable resource that helps local communities in the Amazon protect their environment and their way of life. When done the right way, it’s a fruit that is good for you and good for the world. That’s a real superfood in my book!

Appearance on the ‘Tank’

Since I first started Peaceful Fruits, people have been telling me, “You should go on Shark Tank!” Honestly, my response was generally to smile, agree, and move on, filing this under ‘awesome-but-never-gonna-happen,’ like meet a hungry Oprah out on a hike or win the lottery. But in May of 2016, Peaceful Fruits hit a big milestone and was named one of the top social enterprise startups in Ohio by SEAChange, an accelerator and pitch contest, where we won $20,000. With that validation under my belt, I decided to go for it. I sent the Sharks a video of my winning pitch and they decided they wanted to see more!

Commitment to Hiring People With Disabilities

With our labeling assistant AJ! AJ is living with Down Syndrome and is working on developing job skills. He is also one of our first fans!

Peaceful Fruits started because I wanted to stay connected to the people in the Amazon, to help them stay on their land and protect the environment and their culture, on their own terms. At the same time, I also wanted to be rooted in my community right here in the United States. Here, people with disabilities also need economic opportunity that respects who they are and what they can do. That’s why we partner with several local non profits, currently Hattie Larlham and Blick Center, to offer full-wage employment to participants coming through these organizations’ vocational programs. These people have so much to offer, from both a mission standpoint and a pure business outlook. They do great work, they are great to work with, and they help us get the job done while strengthening our brand

Kickstarter was a wild ride! For anyone considering crowdfunding, the most important thing to remember is that your best bet is to bring your own crowd. With only about 1,000 followers on Facebook and a minimal budget (we did it on a shoestring), we knew it was all about elbow grease. I worked my personal network very hard and we also benefited from the multiple constituencies Peaceful Fruits has value for – healthy snackers, people concerned with the rainforest and people connected to the disabled community. We more than doubled our goal, but the biggest value was tapping into a core group of proactive fans that we continue to go back to for input on branding, messaging and product development.

Other Tank products to eat: 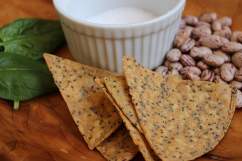 Chirps Chips on ‘Shark Tank’: A Look Inside the Snack Made From Cricket Flour