March 12 is daylight saving time 2017. At 2 a.m., most North Americans will move their clocks forward so that evening daylight lasts an hour longer until November at the sacrifice of normal sunrise times.

Daylight saving time, sometimes incorrectly called “daylight savings time,” is a mostly America and European practice. However, it is a much older practice that has roots in ancient history.

Learn more about the origins and history of daylight saving time below!

From left to right, six ancient Egyptian priests and two warriors. Two of the priests wear cloaks made from animal skins, and one carries an ankh, symbol of life. (Hulton Archive/Getty Images)

Ancient Egyptians were the first people to document having a 24-hour day. They divided the day into two, 10-hour segments. They then added one hour at each end of the 10-hours: one for dawn and one for twilight. Thus, a 24-hour day was born, reports Science ABC.

Ancient Egyptians measured the day with devices like shadow clocks.

However, the Babylonians were the first to divide an hour into 60 minutes. The division comes from their sexagesimal (counting in 60s) system for mathematics and astronomy. They derived their number system from their predecessors, the Sumerians, who used the sexagesimal as early as 3,500 B.C. Scientific American writes, “Although it is unknown why 60 was chosen, it is notably convenient for expressing fractions, since 60 is the smallest number divisible by the first six counting numbers as well as by 10, 12, 15, 20 and 30.”

The ancient Greco-Egyptian mathematician Claudius Ptolemy, usually just known as Ptolemy, later divided the hour into the “second minute,” which became known as the second. It was first described in his work Almagest around 150 C.E.

Thus, modern timekeeping was born. However, it wasn’t until the 16th century that mechanical clocks were invented and made the display of seconds common.

Re-enactors from the Roman Deva Victrix 20th Legion parade through the city of Chester as they celebrate the ancient Roman festival of Saturnalia on December 20, 2012 in Chester, England. Saturnalia was the mid-winter feast when Romans commemorated the dedication of the temple of the god Saturn. Ancient Romans thought that celebrating Saturn would bring back the light and warmth of summer. (Christopher Furlong/Getty Images)

While ancient Romans were not familiar with the second, they were definitely well-versed in hours and minutes as their empire extended into the regions that the timekeeping measures were invented.

Although they did not fix their schedules to the clock the way modern people do today, they did adjust their daily schedules to the sun. During summertime, ancient Romans would often divide daylight into twelve hours regardless of daytime, so that each daylight hour was longer during summer.

Romans often used “water clocks” to track time. Water clocks, along with sundials and hourglasses, are a very ancient way of measuring time. To track time, water clocks use the regulated inflow and outflow of water. To see a video of a water clock watch the video below.

To accommodate for an ancient version of daylight saving time, Romans would use water clocks of different amounts for different months of the year.

Founding Father Benjamin Franklin first proposed a type of daylight time in 1784 in his essay “An Economical Project for Diminishing the Cost of Light.” The essay was meant to be a joke, directed to the editor of The Journal of Paris, that suggested that Parisians could save on the cost of candles if they got out of bed earlier in the morning, writes TimeAndDate.com.

However, this was not taken seriously then by Parisians or Americans.

The idea of daylight saving time in the United States wouldn’t become until World War I when it was signed into law by President Woodrow Wilson in 1918.

4. Daylight Saving Time Used to be Known as ‘Fast Time’

Prior to World War I, there had been attempts at daylight saving time. Andrew Peters of Massachusetts introduced a DST bill to the United States House of Representatives in May 1909, but it didn’t make through committee, writes Seize the Daylight: The Curious and Contentious Story of Daylight Saving Time.

However, once Germany enacted DST in 1916 in an effort to curb coal shortages and air raid blackouts, allied countries quickly followed suit. President Woodrow Wilson signed DST into law in 1918 after the U.S. entered the war in 1917.

However, the original DST was meant for only wartime and it has gone through many iterations since 1918. The modern version of DST is known as “peacetime DST” and came about in 1966.

Daylight saving time is a set calendar date. It is always the second Sunday in March and begins on Sunday, March 12 at 2 a.m. When the clock strikes 2 a.m., it “springs” forward to 3 a.m. for a majority of the United States.

This easy to remember because when daylight saving time ends on November 6 this year, clocks “fall” backward for autumn.

States and regions that don’t participate in daylight saving time include Arizona (except for the Navajo Nation, which does), Hawaii, and the overseas territories of Puerto Rico, American Samoa, Guam, the Northern Mariana Islands, and the United States Virgin Islands. This is done for a multitude of reasons and has as much to do with local politics as it does with geographic location.

5. Some People Want It Repealed

Raindrops hang on to Crocuses at Kew Gardens on March 1, 2013 in Kew, England. (Dan Kitwood/Getty Images)

DST is a divisive subject.

Its opponents tend to be rural people like farmers, reports The Guardian, who claim that the time change upsets the natural biorhythm of both humans and animals. Another argument is that the actual energy savings benefits are inconclusive, reports National Geographic. 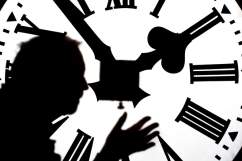 What Time do Clocks Move Forward for Daylight Saving Time 2017?