FNN 3/16 LIVESTREAM: Political Events; Fire In Raleigh, NC; Breaking NewsBrought to you by Desert Diamond: http://ddcaz.com President Donald Trump unveiled a $1.15 trillion budget Thursday, proposing a far-reaching overhaul of federal spending that would slash many domestic programs to finance a big increase for the military and make a down payment on a U.S.-Mexico border wall. Trump's plan seeks to upend Washington with cuts…2017-03-17T05:07:03.000Z

A massive five-alarm blaze overtook the downtown area of Raleigh, North Carolina late in the night on March 16

According to the Raleigh Police Department, one minor injury was reported as a result of the fire.

Watch news coverage from the scene in the video above.

The fire reportedly started at an apartment complex that was under construction near 300 West North St. The site on fire was reportedly located next to Glenwood South restaurant and the bar district.

Details on how the huge fire started haven’t yet been disclosed.

For additional news coverage, watch the video below.

Early reports from online users showed a massive response to the huge flames. Twitter users posted a video of a crane at a nearby construction site collapsing. 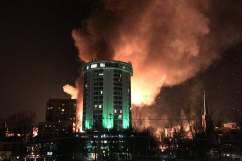 Read More
Breaking News
Downtown Raleigh is currently on fire as crews try to put out a massive blaze in the downtown area. Watch the live news coverage from the scene.