InfoWars host and conspiracy theorist Alex Jones is currently facing a dilemma. Jones and his ex-wife Kelly are embroiled in a courtroom battle to decide who should get custody of their three children, and one of the main arguments put forth by Kelly Jones and her lawyers is that the angry conspiracy theories put forth by Alex Jones demonstrate that he is an unfit father.

The Austin Statesman-American reports that at a pretrial hearing, Kelly Jones testified that Alex is “not a stable person. He says he wants to break Alec Baldwin’s neck. He wants J-Lo to get raped. I’m concerned that he is engaged in felonious behavior, threatening a member of Congress [a reference to Jones’ recent comments about California Congressman Adam Schiff]. He broadcasts from home. The children are there, watching him broadcast.”

So Alex Jones’ attorney, Randall Wilhite, countered that his client should not be judged based on his InfoWars appearances, anymore than Jack Nicholson should be judged for his behavior playing the Joker in Batman, because Jones is “playing a character,” Wilhite said. “He is a performance artist.”

But if “Alex Jones, conspiracy-mongering InfoWars host” is a character every bit as fictional as “The Joker, terror of Gotham City,” this could hurt InfoWars’ credibility among its own fan base. Hence Jones’ dilemma: if he insists he believes everything he espouses on InfoWars, he keeps his fan base but risks losing his children, whereas if he goes along with his own lawyer’s statements, it’ll help his custody case but might cost him his fanbase.

If Alex Jones is real he could lose his kids, but if he's fake he loses Infowars credibility. It's a douche-22.

To get around this conundrum, on April 18 Jones posted a video to the InfoWars YouTube channel pretending that the “mainstream media” (as opposed to his own lawyer) accused him of being merely a performer – and also pretending that the “performance” claims referred to instances where Jones actually did dress up in costume and play various characters on InfoWars broadcasts, as opposed to his lawyer’s actual claim that Jones’ entire “angry conspiracy theorist” persona is an act.

The video starts with Jones discussing recent news events related to North Korea, then he changes the subject at the three-minute mark. “First off! They love to brand us as fake news, or the media loves to attack me, and say ‘He dresses up in lizard suits, like Gwor, or whatever the name of the guy is, from the Star Trek episode, the famous one, where he’s fighting Captain Kirk [note: Jones here is referring to the “Gorn,” a lizard monster from the Star Trek original series episode “Arena”], and then the news asks me ‘Are you serious?’ And I say ‘That’s satire! I’m being an actor, acting like I’m a space alien that wants to exterminate the population of the Earth, trying to sell you on taking vaccines. I don’t actually believe that the Star Trek character’s real. Then they go ‘Oh my gosh! Alex Jones is fake! He says he’s an actor!’….

“If I put a top hat on and play the part of the head of Goldman Sachs, saying ‘I’m screwing you over, I love the megabanks, I’m gonna rob you, world government’s good,’ I’m illustrating how George Soros and other people think of you. I don’t literally believe that. The time that I put on clown makeup and played the part of the Joker, saying drink your fluoride water and take your vaccines, ’cause you’re gonna see pretty colors, kids, people got freaked out and said ‘Oh my gosh, you’re not for real, because you act like a nice guy on air, but then you acted like a monster for an hour on TV, and it was powerful! It was a powerful performance! That’s why people were so freaked out, and they said ‘What’s the real you?’ …. there are headlines, in BBC, Reuters, AP: ‘InfoWars host, Alex Jones, plays a character, is different in real life.’ What? I didn’t say that. … this is the type of deception that is going on.”

When Jones quoted these “headlines” he left out one crucial word. The video image shows a printout from a CTV article headlined “’Infowars’ host Alex Jones plays a character, is different in real life: lawyer.” It is indeed true that Alex Jones himself did not say he is playing a character and is different in real life; Jones’ lawyer said this, in court, while representing his client in a child-custody battle.

A few second later on the video, Jones said “They play these semantical lawyer games, ladies and gentlemen. It’s ridiculous.” However, in context, Jones’ use of the pronoun “they” suggests that these “lawyer games” are being played by mainstream media journalists as opposed to his own lawyer (who, as of press time, Jones has not fired for presumed misrepresentation of his client).

Earlier on April 18, RightWingWatch captured a video clip Jones recorded while driving in his car and originally posted on Facebook (though the Facebook video has since been taken down).

In the video, seen below, Jones says “I am an actor. We’re all actors. But I believe in what I stand for, I’m not an actor as my main identity, but I am a talented person. And I – with my small children, would play like I was, you know, a goblin, or a pirate, or a superhero, and I would chase them around the house, you know, like a grandpa plays with their kid in the yard, we’re all, we all do that. You ever, with your wife or whatever, have role play? You’re an actor! Does that mean you’re not a real person? It’s the war on knowledge, the war on intellect, the war on, like people say ‘Oh my God!’ like, like, people, I’ve had famous liberals come to my house and they see oil paintings I’ve done, or they’ll pick up a piece of paper with some poetry I’ve written on it, and they go, oh my god, you’re just – it’s all fake, you’re not a right-wing extremist! And I’ll go, ‘I was never a right-wing extremist! I’m a thinker, I’m an open person, I am who I am, I do have a Texas accent….they have to misrepresent who I am and what I stand for, and take everything out of context….”

Jones apparently recorded this video as he drove to court for his child-custody trial. 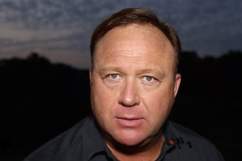 Loading more stories
wpDiscuz
7
0
Would love your thoughts, please comment.x
()
x
| Reply
Watch InfoWars host Alex Jones try to avoid contradicting his own lawyer's claim that he is merely a "performance artist" while simultaneously convincing his fanbase that everything he says is real.