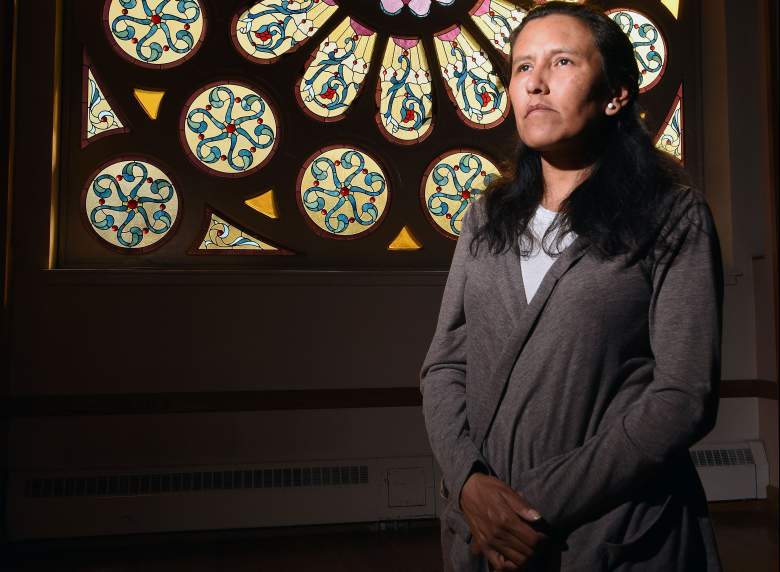 Jeanette Vizguerra in the First Unitarian Society Church of Denver in Denver, Colorado, on February 16, 2017. (Getty)

Jeanette Vizguerra, an undocumented mother who has been taking refuge in a Denver church for the past few months, has been named one of the 100 most influential people in the world.

TIME Magazine’s profile of Vizguerra was written by actor and activist America Ferrera, who said that Vizguerra’s inspiring life stands in contrast to the rhetoric President Donald Trump has used to describe undocumented immigrants.

“The current Administration has scapegoated immigrants, scaring Americans into believing that undocumented people like Jeanette are criminals,” Ferrera said. “She came to this country not to rape, murder or sell drugs, but to create a better life for her family. She shed blood, sweat and tears to become a business owner, striving to give her children more opportunities than she had. This is not a crime. This is the American Dream.”

So who is Jeanette Vizguerra, and what is her story? Here’s what you need to know.

1. She Came to the United States Illegally in 1997 & Worked as a Janitor 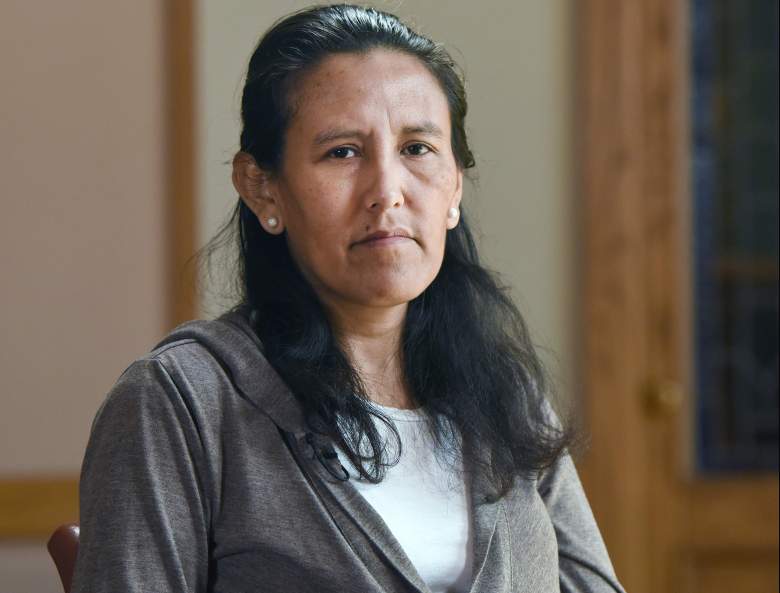 Jeanette Vizguerra in the First Unitarian Society Church of Denver in Denver, Colorado, on February 16, 2017. (Getty)

Jeanette Vizguerra came to the United States illegally in 1997 with her husband and six-year-old daughter.

According to The New York Times, Vizguerra began working when she came to the U.S. as a janitor and a union organizer.

Vizguerra says that she and her husband came to the United States looking for a better life.

“[W]e came because my husband, who was working as a chauffeur for a bus company, had been —had suffered three kidnapping experiences while driving the bus,” Vizguerra told Democracy Now.

Over the next several decades, Vizguerra would work a number of jobs including housekeeper, house painter, and janitor. Her husband works as a driver for a tile company. 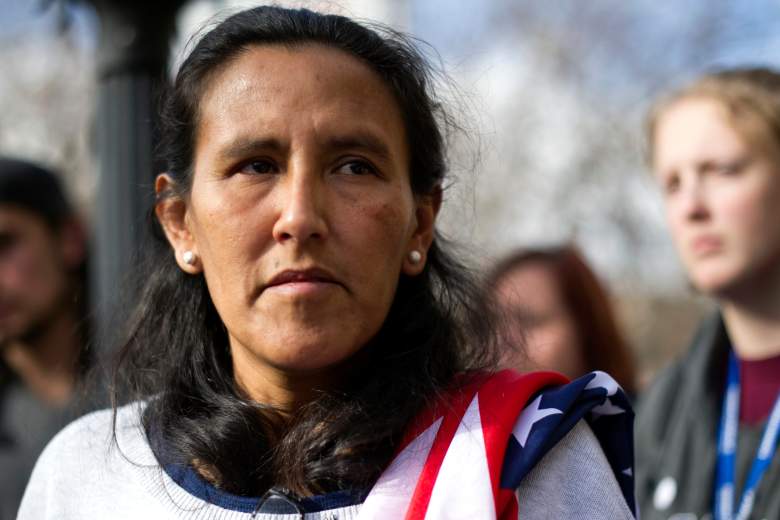 Jeanette Vizguerra outside the First Unitarian Church in Denver, Colorado on February 18, 2017. (Getty)

Jeanette Vizguerra was arrested in 2009, charged with not having a license or insurance and having an expired license plate. These three charges were later dismissed, but she was also charged after making up a Social Security Number to put on a job application. According to CNN, she plead guilty to “attempted possession of a forged instrument.”

After her conviction, Vizguerra was ordered out of the country, but her lawyer asked for five postponements of deportation, the most recent of which was in December 2016, according to The New York Times.

While she was appealing a voluntary departure, Vizguerra returned to Mexico in 2012 when her mother was ill, but her mother died before Vizguerra made it back home, according to CNN. Vizguerra then paid a smuggler to illegally sneak her back into the United States. During this return home, she was arrested by border patrol agents and detained for several weeks.

Vizguerra told Democracy Now that although she was using fake documents, she has still been contributing to American society for 20 years.

“Every year, we have paid taxes,” she said. “And we’ve contributed our labor. And what many people don’t know is that immigrants can’t access the benefits of those taxes, any of the programs. That all stays here with this country. So I would like to ask: If you’re going to deport me, are you going to return 20 years of labor and taxes to me before I go, everything that I’ve contributed here?”

3. In February, She Did Not Show Up to an ICE Check-in & Took Refuge at a Church 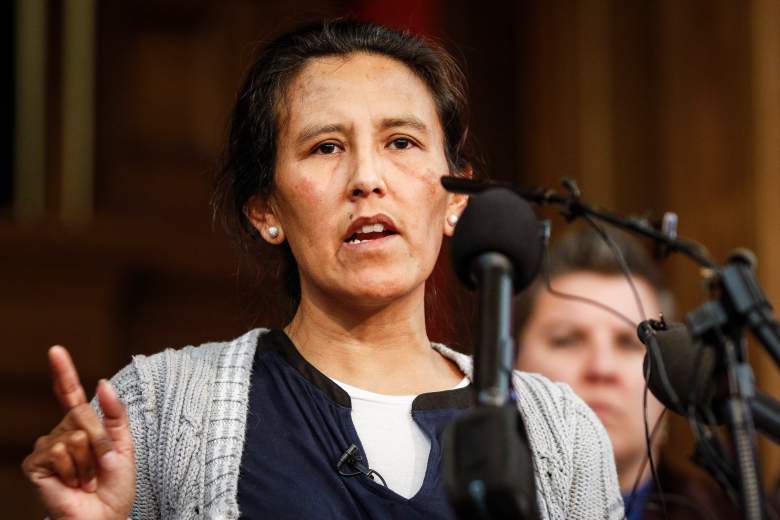 Jeanette Vizguerra addresses supporters and the media while seeking sanctuary at First Unitarian Church on February 15, 2017 in Denver, Colorado. (Getty)

Since her arrest, Jeanette Vizguerra has had to regularly check in with Immigration and Customs Enforcement.

But in February, she did not go to a check in, worried that she might be deported this time. At the same time, her request for another “stay” was rejected, according to The New York Times.

“[W]hat led me to take the decision this time in my case was the silence from Immigration and Customs Enforcement and Homeland Security about my stay application that I submitted on December 7,” she told Democracy Now. “They kept saying over and over again that they were just reviewing my case, just reviewing my case. They wouldn’t give us any information. And then, last week, with the arrest and deportation of Guadalupe, as well as the detention of a young DREAMer named Daniel, who has DACA, I decided that it was not worth the risk to go and present myself at Immigration and Customs Enforcement.”

Vizguerra subsequently took refuge at the First Unitarian Society in Denver, Colorado, where she has been staying ever since. This church had promised to shield undocumented immigrants.

ICE’s policy states that officers are not to enter “places of worship, such as churches, synagogues, mosques, and temples.”

4. She Has Four Children, One of Whom Is Undocumented 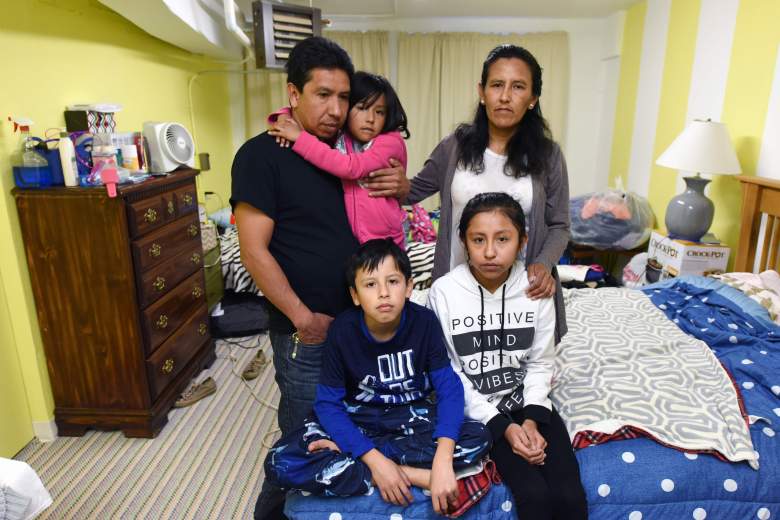 Jeanette Vizguerra poses with her husband Salvador Baez and their children. (Getty)

Jeanette Vizguerra has four children in the United States.

Three of them, 6-year-old Zury, 10-year-old Roberto, and 12-year-old Luna, are legal United States citizens, having been born after Vizguerra settled in the United States.

Roberto told Democracy Now that he and his siblings visit their mother sometimes at the church and that he’s afraid that “some ICE person will just pop out and pick her up and take her away.”

Vizguerra’s oldest daughter, though, is undocumented. 26-year-old Tania Baez was brought to the United States with her mother illegally when she was six years old. She is protected under President Barack Obama’s Deferred Action for Childhood Arrivals. Baez is married and has three children, according to The New York Times.

Recently the first DACA recipient was reportedly deported to Mexico, although Department of Homeland Security officials say that Juan Manuel Montes left on his own, according to the Los Angeles Times.

Vizguerra had a plan in place for what her children should do if ICE agents came to the house, as described in the TIME Magazine piece on her.

“Some families have emergency plans for fires, earthquakes or tornadoes,” America Fererra wrote. “Jeanette Vizguerra’s family had an emergency plan for a dreaded knock at the door. If U.S. Immigration and Customs Enforcement officials came to her home, her children knew to film the encounter, alert friends and family and hide in the bedroom. The Vizguerra family lived in terror of being ripped apart by deportation.” 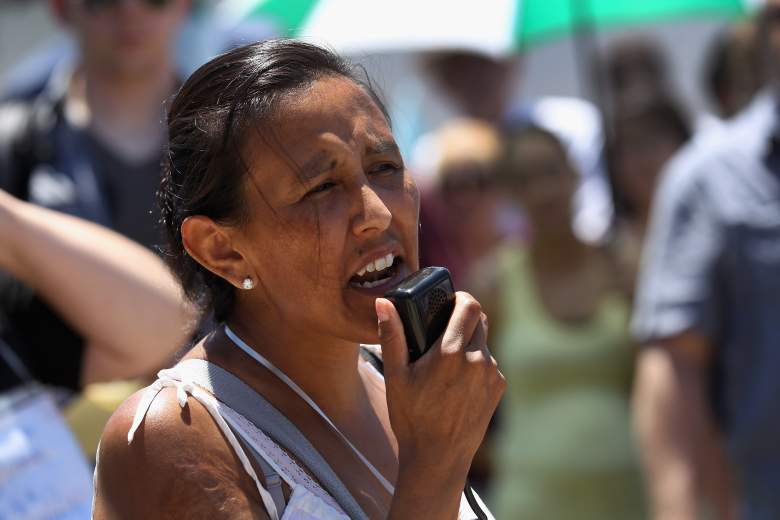 Jeanette Vizguerra leads fellow demonstrators in a protest outside a Wells Fargo bank branch on July 1, 2011 in Aurora, Colorado. (Getty)

In addition to going public with her story, Jeanette Vizguerra also founded the Metro Denver Sanctuary Coalition to help shield other undocumented immigrants in Denver.

Vizguerra told Democracy Now that she thinks President Donald Trump is making a big mistake when it comes to how he is handling immigration.

“What would happen to this country if you lost the labor force of immigrants here in the United States?” she asked. “Who would pick crops, work in your hotels, restaurants and construction? Who would keep the engine of the economy moving forward? If he continues to target the immigrant community, it’s this whole country that will suffer the consequences economically.”

She also told President Trump that she is not more of a criminal that he is.

“[S]upposedly, I am a criminal because I drove without a license, because I had expired stickers on my car, because I had false documents to work and put food on the table for my children,” she told Democracy Now. “But what should we call you, Mr. President Trump, when you have been evading taxes for years, when the way that you’ve been acting is not in keeping with good conscience?”

Loading more stories
wpDiscuz
15
0
Would love your thoughts, please comment.x
()
x
| Reply
Jeanette Vizguerra, an undocumented mother who has been taking refuge in a Denver church, has been named one of the 100 most influential people in the world.