Kay Ivey is about to become the new governor of Alabama.

This comes as Alabama’s 53rd governor, Robert Bentley, resigned in disgrace. Bentley was facing impeachment after the Ethics Commission found that he had likely violated campaign finance laws. On Monday afternoon, Bentley was booked into Montgomery County jail, according to NBC News.

Kay Ivey is expected to be sworn in as governor later this evening.

Like Robert Bentley, Kay Ivey is a Republican. But to get more specific, what are her positions on various issues? Here’s what you need to know.

1. She Supports Banning Abortion After 20 Weeks

When it comes to abortion, Kay Ivey is in favor of banning the procedure after 20 weeks of pregnancy.

In 2013, Ivey signed an amicus brief in support of an Arizona law banning the procedure after that amount of time. This brief was filed when the constitutionality of the Arizona law was being considered by the Supreme Court; a lower court had found it unconstitutional.

“Scientific evidence supports a baby is able to feel pain by 20 weeks, halfway through the pregnancy,” Ivey said. “The 9th Circuit was wrong to overturn Arizona’s common sense law to ban late-term abortions, and I am hopeful that with the support of strong women leaders across the country, the Supreme Court will reverse that ruling to protect the dignity of life.”

Ultimately, the Supreme Court ruled that this Arizona law was not constitutional.

“You are a strong advocate for life; you support pro-life legislation and you oppose the use of state funding for elective abortion,” Bill Klein, president of Alabama Citizens for Life, said of Ivey in an endorsement letter. “We look forward to working with you to restore legal protection for innocent life–unborn children and medically disabled or dependent persons whose lives are threatened by abortion or euthanasia.”

In an interview with The Dallas Morning News, Ivey said that although Roe v. Wade is the law of the land, Arizona can regulation abortion.

“I am strongly pro-life,” Ivey told the Dallas Morning News. “We can’t ban abortion — that’s a federal issue that’s been confirmed by the Supreme Court — but at the state level, we can regulate and control unsafe health practices.”

2. She Was Given an ‘A’ Rating by the National Rifle Association

In 2014, Kay Ivey was endorsed by the National Rifle Association.

In addition, Ivey was given an ‘A’ rating from the organization, indicating a pro-gun record, according to AL.com.

The NRA describes those who receive an A rating as a person “who has supported NRA positions on key votes in elective office or a candidate with a demonstrated record of support on Second Amendment issues.”

Ivey’s Republican opponent in that election, Stan Cooke, received a rating of AQ. This means that the person receives an ‘A’ rating, but it’s only based on the way they responded to an NRA questionnaire and not based on any voting history.

3. She Said in 2012 That Obamacare Would Destroy America

As lieutenant governor, Kay Ivey has been strongly against the Affordable Care Act.

When the Supreme Court upheld the constitutionality of Obamacare in 2012, Ivey released a statement saying that keeping the law in place could lead to the end of the United States as we know it.

She said, “The Supreme Court’s ruling today, upholding major portions of Obamacare, perpetuates the illusion that taxpayers can and should provide healthcare for every citizen, in spite of the fact that the country is broke! If our elected leadership in Washington does not overturn this law, it will bring America down.”

She went on to say that America would “spend and tax itself into weakness and, God forbid, collapse,” just like “the former great powers of Europe.”

Ivey said that she instead supports an Obamacare alternative that focus on “restoring state flexibility, promoting free markets and competition while empowering consumer choice.”

4. She Was in Favor of Banning Electronic Bingo

One issue that has been quite prominent in Alabama in recent years has been the question of whether to ban electronic gambling casinos.

Kay Ivey has supported Governor Robert Bentley’s position that electronic bingo should be made illegal. However, she did say while she was running for lieutenant governor that the state was spending too much time focusing on this one issue.

“The Legislature in the last four years has been an absolute shell game focused on electronic bingo and gambling,” she said, according to AL.com. “That’s unconscionable for one issue to tie down a body that cannot be responsive to the people of Alabama in times when we need really meaningful legislation.”

The Alabama Supreme Court ruled in 2016 that electronic bingo is illegal in Alabama.

5. She Endorsed Mitt Romney for President in 2012 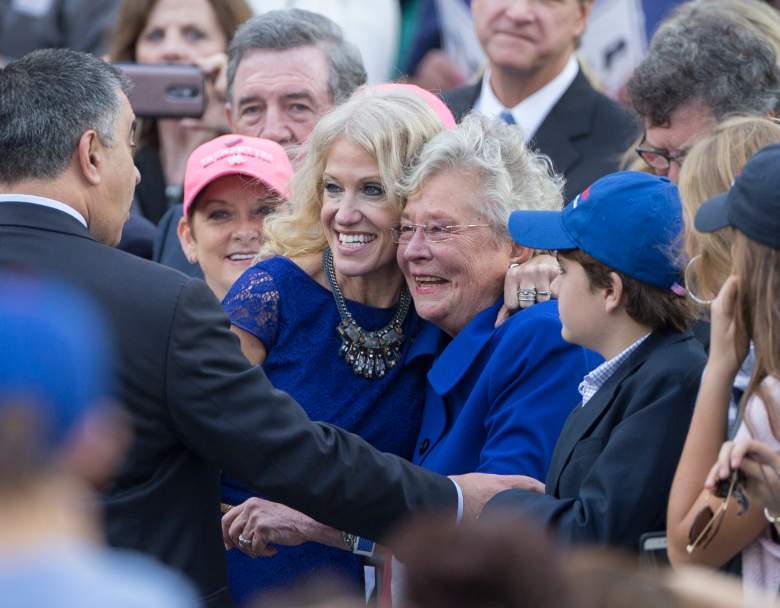 Kay Ivey with Kellyanne Conway during a Donald Trump rally on December 17, 2016 in Mobile, Alabama. (Getty)

During the Republican presidential primaries of 2012, Kay Ivey was a supporter of Mitt Romney.

“Mitt Romney’s experience is unparalleled,” Ivey said in August 2011. “I am confident that he is the best candidate to tackle the issues facing our country. He has the right experience as governor and in the private sector to reduce government intrusion, restore fiscal responsibility, and empower the business sector to create quality jobs.”

She also said that Romney is “a true conservative,” adding that she was impressed by “his record of making government more responsive to the people.”

In 2014, Romney endorsed Kay Ivey for Alabama lieutenant governor, saying that Ivey is a conservative leader who supports limited government, according to the Montgomery Times.

In 2016, Ivey pledged her support for Donald Trump after he became the Republican party’s nominee.

“Now that [Donald Trump] has secured the required number of delegates, I hope all Republicans will join with me by pledging their support to rally around his campaign,” she said in a statement. “We are at a critical time in our country and are in need of leadership to confront the special interests that continue to move our country in the wrong direction.”

Loading more stories
wpDiscuz
5
0
Would love your thoughts, please comment.x
()
x
| Reply
Kay Ivey is about to become the new governor of Alabama. So where does she stand on some of the most important issues of today?