This is the moment when the U.S. Air Force dropped the Mother of All Bombs on an ISIS tunnel complex in Afghanistan. The detonation happened at around 7 p.m. local time on April 13. The area where it exploded was in the Achin district of Nangarhar, close to the Pakistani boarder.

CNN, quoting Afghan officials, says that 36 ISIS fighters have been killed. The network added that intelligence officials estimated that there could have been as many as 800 ISIS fighters in the area. No civilians were harmed in the attack.

The BBC reports that among those killed was Siddiq Yar, a local ISIS commander. An Afghan government spokesman, Shah Hussain Murtazawi, told the BBC that Yar and his followers had “come from Pakistan and were persecuting people in the local area.”

Just passed this valley in Achin district of Nangarhar province is where the US dropped "mother of all bombs" in Afghanistan pic.twitter.com/txhjro2VjY

The Air Force Times reports that the specific target was an ISIS tunnel complex in the region. The top U.S. commander in the region, Gen. John W. Nicholson, said in a statement, “As ISIS-K’s losses have mounted, they are using IEDs, bunkers and tunnels to thicken their defense. This is the right munition to reduce these obstacles and maintain the momentum of our offensive against ISIS-K.”
When asked about the bombing, Trump said, “Everybody knows exactly what happened so, and what I do is I authorize my military.”

I vehemently and in strongest words condemn the dropping of the latest weapon, the largest non-nuclear #bomb, on Afghanistan by US military. This is not the war on terror but the inhuman and most brutal misuse of our country as testing ground for new and dangerous weapons. It is upon us,Afghans, to stop the #USA.

While General John Nicholson has defended the action saying, “This was the right weapon against the right target.” 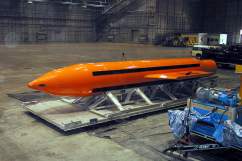 The Mother of All Bombs: 5 Fast Facts You Need to Know