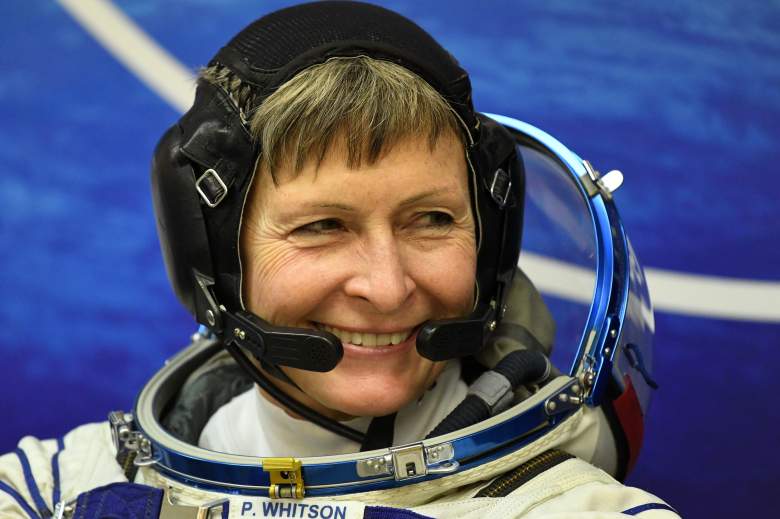 Peggy Whitson prior to blasting off to the International Space Station. (Getty)

Whitson is currently the commander of the International Space Station, and she is the oldest woman to ever go to space. On April 24th, Donald Trump will host a video conference call with Whitson, and he will be joined by his daughter, Ivanka Trump.

“The President looks forward to personally congratulating her and NASA on this incredible accomplishment, and to thanking her and Mr. Fischer for their service to our country in the cause of exploration and discovery,” the White House said in a press release.

I’ll be working aboard the @Space_Station longer than expected! This is where I make the greatest contribution so I'm looking forward to it. pic.twitter.com/3ejGpnH6qE

So who is Peggy Whitson, the NASA astronaut who Donald Trump will speak with today? Here’s what you need to know.

1. She’s From Iowa & Has a Doctorate in Biochemistry 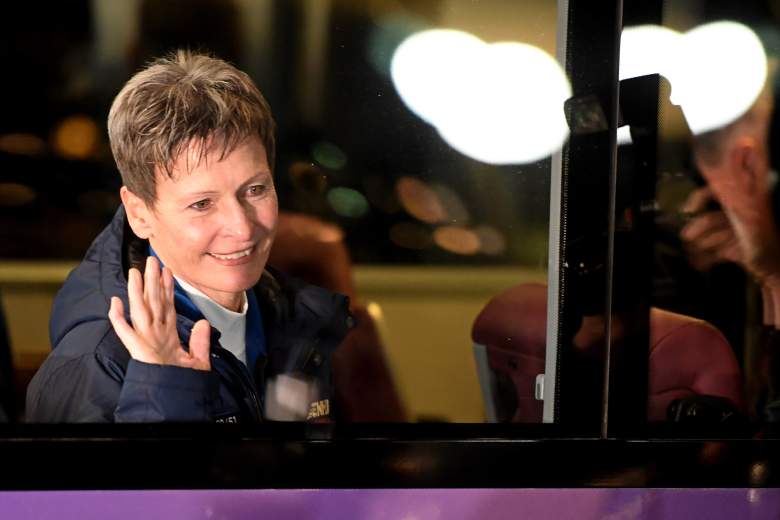 Peggy Whitson waves from inside a bus as she leaves to board the Soyuz MS-03 spacecraft at the Russian-leased Baikonur cosmodrome on November 17, 2016, (Getty)

Peggy Whitson was born on February 9th, 1960 in Mount Ayr, Iowa. According to the Des Moines Register, she grew up on a farm in Beaconsfield, Iowa, a town with a population of 15 people. Whitson’s mother, Beth Whitson, still lives on the farm in Iowa.

While growing up in Beaconsfield, Whitson always said that she was going to be an astronaut. And the same year that she graduated high school, 1978, was the year that the first female astronauts were named.

“It really didn’t become a reality to me to become a goal until I graduated from high school, which was coincidentally the same year they picked the first set of female astronauts,” she said in a NASA interview. “I think that was when I decided I wanted to become an astronaut. Still, I knew very little about the whole process or what it would take to get in. But I do have a healthy dose of that stubborn thing going for me which, I think, kept me pursuing the goal.”

In 1981, Whitson graduated from Iowa Wesleyan College with a bachelor of science degree in biology. Then, in 1985, she graduated from Rice University with a doctorate degree in biochemistry. After her graduation, she continued on at Rice as a post-doctoral fellow for another year.

Whitson later said that biology was always her passion, maybe because she grew up on a farm.

“Maybe it was teachers, but I think really, maybe, growing up on a farm and being around animals and plants and seeing things grow, I think is probably why I was interested in that,” she told NASA. “It struck a chord in me; the farmer’s daughter thing, I guess.”

2. She Began Training for Spaceflight in 1996 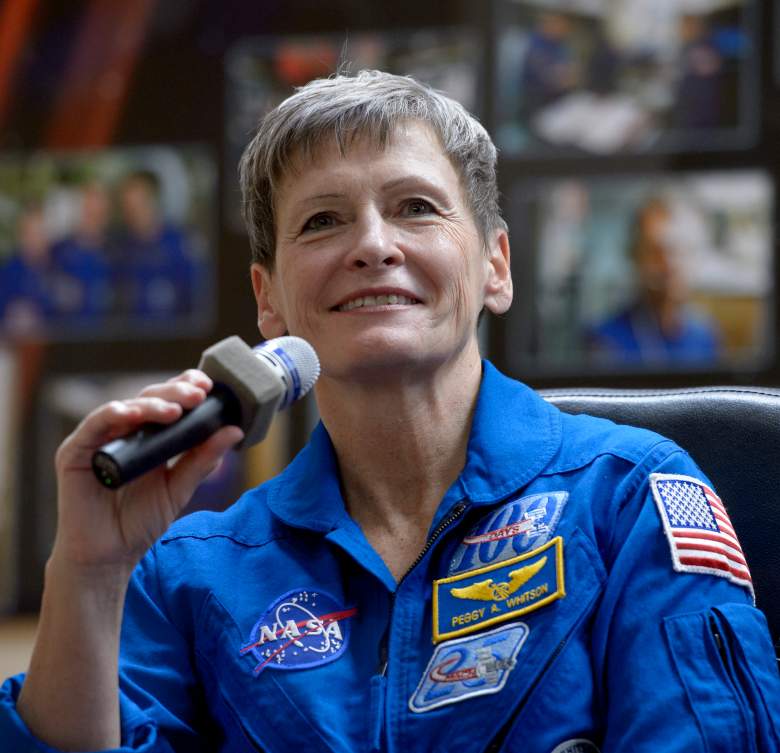 Peggy Whitson during a press conference on November 16, 2016 at the Cosmonaut Hotel in Baikonur, Kazakhstan.(Getty)

Peggy Whitson spent a number of years working at NASA before she first went to space.

In 1989, Whitson joined NASA as a research biochemist. She served in this role for three years before she became a technical monitor, a job she held from 1991 through 1992. Then, in 1992, she became the project scientist of the Shuttle-Mir Program. Whitson subsequently worked in NASA’s Medical Sciences Division and then became the co-chair of the U.S.-Russian Mission Science Working Group.

“I’ve always said I’ve never had a real job because I’ve always done what I wanted to do, which was work at NASA,” she told NASA in 2007.

It was in August 1996 when Peggy Whitson began training to become an astronaut. This took two years, and her first mission was in 2002.

3. This Is Her Third Time in Space 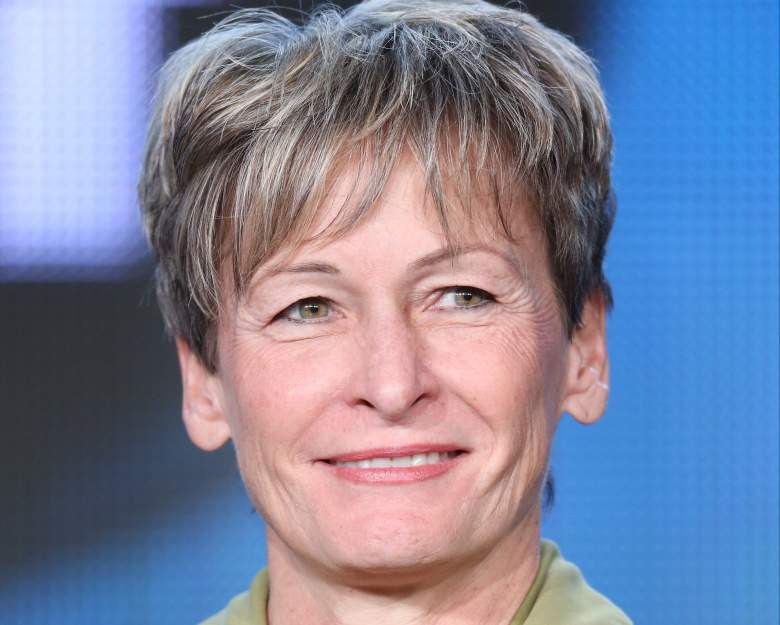 Before her current mission, Whitson had been in space twice before.

Whitson was a crew member on Expedition 5, which launched on June 5th, 2002. She was one of two flight engineers. Whitson subsequently spent 184 days in space, also completing a 4 hour and 25 minute spacewalk.

Whitson has later recalled that she was incredibly nervous going into her first mission.

“I think the first time around, having never flown in space before, I worried about everything,” she told NASA. “I wasn’t sure what it was I had to know, so I thought I had to know absolutely everything. The second time around I’m a lot more relaxed about it.”

“I’m looking forward to all the new elements that we’re going to be able to add to the International Space Station,” she said in 2007 before Expedition 16 launched. “Three new modules will be arriving, and a new, attachment for the robotic arm will also be arriving, so we have the involvement, truly, of our international partners for the first time through all phases of this mission. So I think it’s going to be very exciting.”

4. She is the Oldest Female Astronaut 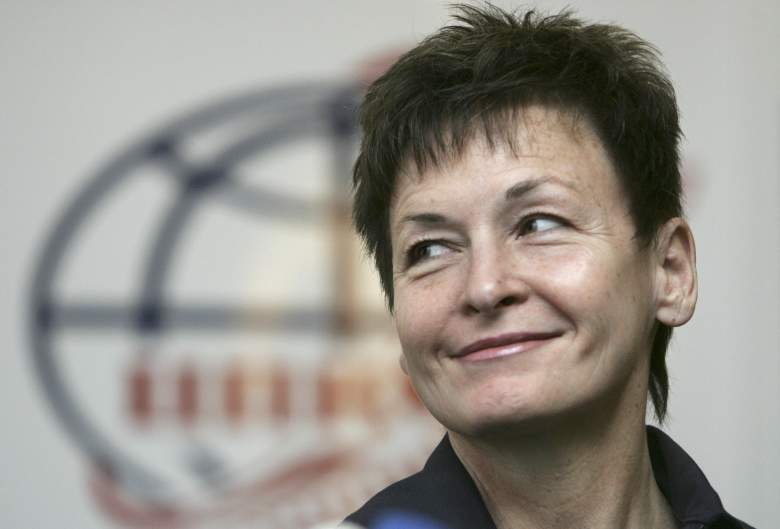 At the age of 57, Peggy Whitson is the oldest female astronaut.

She is also the first woman to command the ISS, and on April 24th, she will have spent more time in space than any other astronaut, beating the record that was previously set by Jeff Williams.

In an interview with CBS News, Whitson said that she did not set out to break any records.

“Breaking records has never been my goal,” she told CBS News. “I think it’s important that we’re continually pushing our limits and showing that we can extend beyond what we have done before.”

Whitson also said that being in space is good for her.

“Space flight’s good for age, I have a lot less wrinkles up here,” she said. “It’s a good place to be as you get older.”

5. Her Husband Also Works for NASA 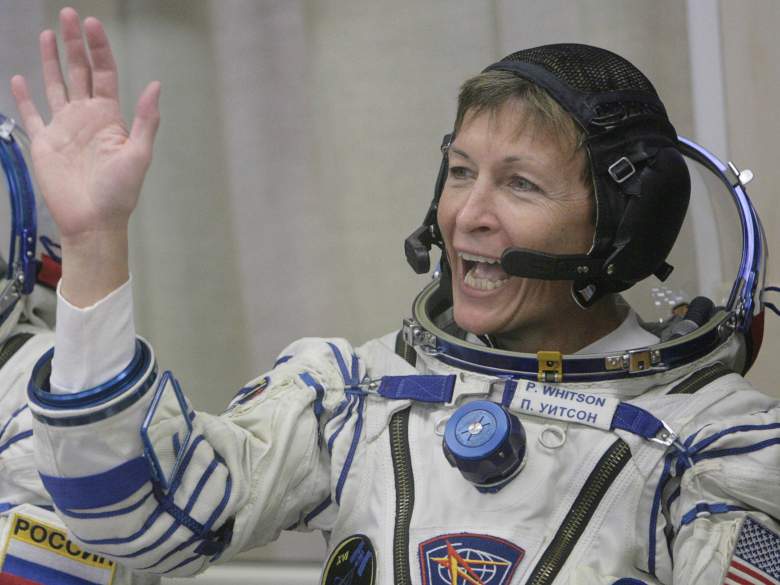 Peggy Whitson waves during a farewell ceremony at the Baikonur cosmodrome, in Kazakhstan, 10 October 2007. (Getty)

Peggy Whitson is married to a fellow NASA employee.

According to NASA, Whitson’s husband is Clarence F. Sams, a biochemist who is the manager of the Cell and Molecular Research Laboratory at NASA Johnson Space Center. He researches the effect spaceflight on biological systems, according to NASA’s profile of him.

Peggy Whitson and Clarence Sams both attended Rice University. Sams was originally interested in aviation, and he told NASA that there’s some commonality between the two fields he explored.

“Most pilots fly because they love to fly,” Sams said. “The good ones are always learning. I think that’s one of the other joys of this job [research]: you have to keep learning, challenging yourself, and trying to figure out something new. That’s part of the professionalism that pilots have, and it’s part of the process of doing science. So that’s the common ground between those two fields.”