A 25-year-old Turkish passenger reportedly tried to enter the cockpit of an American Airlines flight headed from Los Angeles to Honolulu on May 19.

Reports say that Anil Uskanil tried to breach the cockpit of AA Flight 31. He was subdued on the flight until it landed safely and was brought into custody by law enforcement officials for questioning.

Uskanil had been detained by police earlier in the day by authorities at Los Angeles International Airport for a separate incident, but he was released.

The Department of Homeland issued a statement after the plane landed that said it was aware of the situation and continued to “monitor all flights” throughout the rest of the day.

The matter is still undergoing a full investigation and a motive is not yet known.

1. Uskanil Was Subdued & Duct Taped to His Seat By Passengers

EXCLUSIVE: Suspect accused of trying to breach cockpit door on plane from LAX to Honolulu in sheriff's car. https://t.co/aQjEuagqXc pic.twitter.com/VvjlrlNzsE

The flight departed from LAX at 8:34 a.m. on May 19. About halfway through it, Uskanil reportedly made his move on the cockpit.

Witnesses aboard the plane told ABC News that Uskanil tried to “push his way through” first class on his way to the bathroom at the front of the plane, but was stopped by a beverage cart and another passenger. Some witnesses aboard the plane said that Uskanil was wearing a “towel or blanket over his head” and had a laptop in his hands while trying to get into the first-class area.

Earlier reports from a TSA source told the news outlet that Uskanil was standing near the front of the plane by a bathroom when a flight attendant asked for him to take a seat. The source said he had a laptop with him and tried to enter the cockpit before he was stopped by crew members and passengers on the plane — including an off-duty Los Angeles police officer — until the flight landed safely.

One of the passengers told Hawaii News Now that they found duct tape and secured him to a seat.

“It took seconds,” Lee Lorenzen from Orange County, California, Hawaii News Now. “He was pushing against the cart and a bunch of guys grabbed him. They found some duct tape. There were pillows and blankets. And they taped him to his chair. It was all over very quickly. They really deserve a medal for what they did.”

American Airlines has since told the media that Uskanil was “moving toward the cockpit.”

2. Uskanil Was Cited at LAX Hours Before the Flight Took Off

. @AmericanAir Flight 31 as it landed at HNL just after 11:30am. Plane had 2 military escorts accompany it on approach. @HawaiiNewsNow pic.twitter.com/O0dVpaLwGX

Before boarding the flight, the suspect was arrested, cited and released at LAX for “trespassing,” NBC 4 News reported.

The suspect, a Turkish national in his mid 20s, was drinking not legally drunk. > cited, he was released. Was screened. Then boarded #AA31

NBC 4 said that in the early morning May 19, at around 2:45 a.m., officers at LAX responded to a call for a passenger entering a door at the Terminal 5 concourse, which led out to the tarmac area. He was “immediately spotted” by a worker and was detained.

Uskanil had gone through TSA screening and had been drinking, but “didn’t meet the criteria for being drunk in public.” He was arrested for misdemeanor trespassing and given a ticket and then released from custody.

Reports say that he bought his ticket for Flight 31 some time after midnight. He was allowed the board the flight hours later.

3. The Plane Was Escorted By Fighter Jets Until It Landed

As the incident was unfolding, two military fighter jets were scrambled from Hawaii Air National Airport to ensure the safety of those aboard.

A spokesman told the news outlet that the two jets “escorted the airliner to the airport in accordance with homeland defense procedures. Local law enforcement responded once the civilian airliner was on the ground.”

4. Passengers Said Uskanil Acted Odd Before the Flight Took Off

Passengers on the flight told the Associated Press that Uskanil acted very strange before the flight left Los Angeles.

Mark and Donna Basden from New Mexico told the AP that they sat down in their first-class seats with Mark finding a laptop in the pocket directly in front of him. A flight attendant walked over and said it likely belonged to Uskanil, who was using the restroom at the time.

When Uskanil exited the bathroom, Mark handed him the computer. He said that Uskanil “scowled at him” before opening and then closing the computer and moving to another seat. He was then moved back to his original seat near the back of the plane.

Once the plane landed, Uskanil was taken into custody by federal agents and local deputy sheriffs.

Crazy! Someone tried to break into the cockpit on my flight from LA to Honolulu. We were greeted by the FBI. They are now taking us off the plane a few rows at a time for dog sniffing and interviews. I've never seen anything like this. #cnn #fbi #usa #homelandsecurity #hawaii #news —– Any interested news outlets are welcome to use my footage, please credit BPLUS.noisefloor.dnb as the source.

American Airlines released a statement that said it requested law enforcement assistance as soon as the flight landed.

“Due to a disturbance during the flight, the crew requested that law enforcement meet the aircraft upon landing in Honolulu,” American Airlines said in a statement. “American is in touch with federal law enforcement.”

He was brought back to law enforcement headquarters for questioning. It’s currently unclear what his motive in the incident was, and it’s unknown if it was related to terrorism. 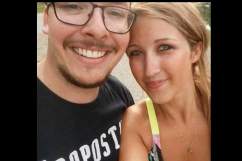 5. Authorities Investigated a Suspicious Item On the Plane

K-9 unit checking Pax for explosives at #Honolulu airport after passenger tried to push his way into first class with a laptop #TSA pic.twitter.com/Vj3jcMPz02

Sources told ABC News that once the plane landed, additional law enforcement personnel responded to the cabin to investigate a “suspicious item” that was associated with Uskanil.

The airline said that there were 181 passengers and six crew members aboard the plane, all who got off the plane safely.

As the investigation began, the airport halted all ground movements of its airfield. The move caused about a 30-minute delay, reports say.

The airport has since resumed its normal operating activities. 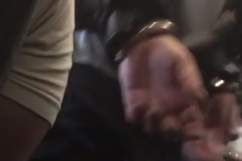 Loading more stories
wpDiscuz
2
0
Would love your thoughts, please comment.x
()
x
| Reply
Anil Uskanil of Turkey was detained by authorities after he tried to enter the cockpit of a plane leaded from Los Angeles to Honolulu.