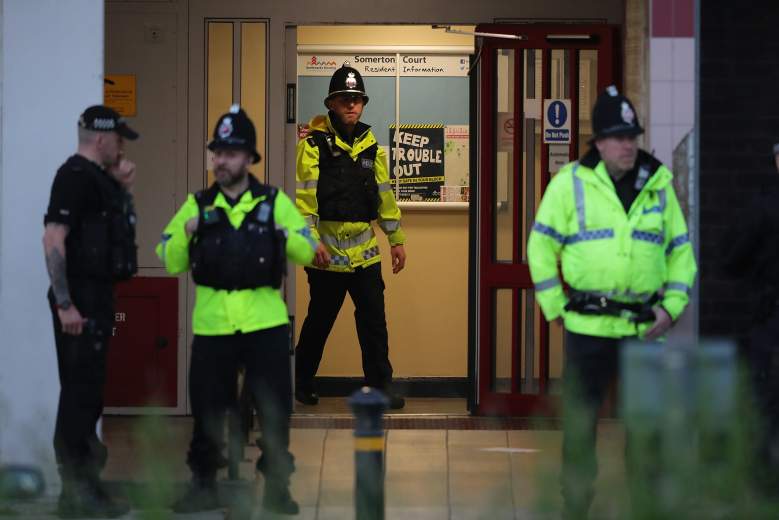 Greater Manchester police raided two flats in Blackley on Wednesday, and took a woman into custody. On Thursday, the department confirmed that the woman is no longer in custody. Her name was not released. The news was posted as part of a statement given by Chief Constable of Greater Manchester Police, Ian Hopkins.

As you can see in the statement posted below, the remaining eight people in custody with possible ties to the Manchester bombing are all men. None of their names have been released and police have not shared any additional information about how these men may have been involved in Monday night’s terror attack.

Latest statement from @ccianhopkins in relation to the incident at the Manchester Arena. pic.twitter.com/xmJe8eh3hV

During Wednesday’s raid, residents in the building recall hearing a “loud bang” before officers entered the building. One resident, Chris Barlow, told the Mirror that he spoke with an officer who told him that the “bang” came when police “blew the door in.”

“When the bang went I heard screaming and shouting and then they took the woman out. She was facing this way out the window and a couple of minutes later two armed police took her away. After the first one I heard loud banging on another door but on the same floor,” 54-year-old Alex Finnie told the Mirror.

“I heard this blast coming from that block of flats over there. Everyone was saying the police blew the door down. There were police vans everywhere. We asked the police officers whether it was in connection with the terrorist attack. They just said they couldn’t say either way,” an unnamed resident told Manchester Evening News.

Searches carried out in Blackley pic.twitter.com/FwT02T4mgK

On Monday night around 10:30 p.m. local time, a bomb went off in the foyer area of the Manchester Arena during an Ariana Grande concert. Twenty-two people have died and dozens more were injured in the blast. Police have confirmed that 22-year-old Salman Abedi was responsible for detonating the bomb. It is believed that Abedi was tied to a “network” and there is cause to believe that he didn’t work alone.

“It seems likely — possible — that he wasn’t doing this on his own. [Monday’s attack] was more sophisticated than some of the attacks we’ve seen before,” Britain’s home secretary, Amber Rudd, told BBC News.

Ms. Rudd has also revealed that the media in the United States was the first to share the name of the suicide bomber, Salman Abedi. She feels that this may hurt the investigation.

“[Rudd believes this] might have compromised aspects of the investigation [and may have] alerted associates [of the bomber] that the security forces here knew who they were looking for. Ms Rudd, I’m told, got on the blower to US officials and gave them a piece of her mind. Officials say they are in no doubt about our views on that,” said BBC assistant political editor Norman Smith.

Read More
Terrorism, UK
Follow Heavy ↓
wpDiscuz
1
0
Would love your thoughts, please comment.x
()
x
| Reply
Police have released a woman who was arrested in Blackley on Wednesday in connection with the Manchester bombing.