Zhou Hai, 22, checked into Shanghai Tenth People’s Hospital complaining of abdominal pain. Doctors discovered that his constipation was from 29 pounds of blocked up feces. Hai was having trouble breathing when he checked into the hospital, reports Chinese media, and said he had been suffering from various instances of constipation for years. He was later diagnosed with Hirschsprung’s disease, a birth defect that causes a blockage in the large intestine, writes Asia One.

Hai’s parents didn’t realize the severity of his condition and thus didn’t seek treatment for his son until it was almost fatal.

The surgery was handled by treatment center director Yin Tao, who made the preliminary diagnosis of Hirschsprung’s, reports Chinese media. The surgery took 3 hours with the team removing nearly 2 1/2 feet of Hai’s colon, filled with feces and weighing nearly 30 pounds.

According to American Academy of Family Physicians, Hirschsprung’s disease occurs in one out of 5,000 births and, with proper treatment, its sufferers can live normal lives. 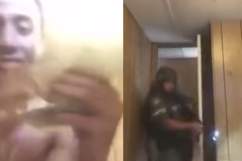