In October 2016, cult leader Victor Barnard was sentenced to 30 years in prison for sexually assaulting two teenage girls for nearly a decade.

Tonight’s episode of In An Instant will focus on the family of Lindsay Tornambe, one of Barnard’s victims. When Lindsay moved to Minnesota to live with Barnard’s River Road Fellowship, he called for her family to let Lindsay live with him and nine other “maidens” in his home. It was then that she was forced to undergo nearly a decade of sexual abuse at the hands of the cult leader.

Read on to learn more about Victor Barnard.

Victor took advantage of the “maidens” who lived with him in his home, away from their own families.

According to the Star Tribune, soon after Lindsay Tornambe moved in with Victor, she was sexually abused by him. The cult leader reportedly told Tornambe and the other victims that “it was his way of showing God’s love.”

The outlet also reports that Barnard left Pine County (where the cult had settled) in the 2000s because rumors of sexual abuse and financial bankruptcy began sweeping the area. Charged were eventually filed against Barnard, and he was located by police in a resort town in Brazil, where he was living with one of his maidens.

In 2016, Barnard pleaded guilty to two counts of felony sexual assault and was sentenced to 30 years in prison.

Before the verdict was delivered by Judge P. Anderson, Barnard spoke, saying, “God is good and his word is faithful and true. I have not walked in his goodness.”

The cult leader faced 59 counts of first and third-degree sexual assault of minors after two women came forward saying he raped them for years, according to The Cut.

On this evening’s episode of In An Instant, one of those women, Lindsay Tornambe, will recount her experiences of sexual abuse at the hands of Barnard. Lindsay served as a witness for the prosecution in court, and according to the Star Tribune, has suffered PTSD, nightmares, trust issues, anxiety, and suicidal thoughts. Another victim, Jess Schlinsky, also came forward to testify. 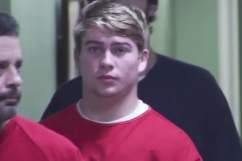 3. He Was a Member of the Way International Before Becoming a Solo Cult Leader

Before starting his work as a solo cult leader, Barnard was a member of a Christian sect called The Way, which is often described as a

When The Way began to disassemble in the 1980s, Barnard went out on his own. He formed the River Road Fellowship, which was initially an offshoot Christian sect before becoming a full-fledged cult.

Barnard persuaded 150 people to sell their homes and move with him to a desolate compound in Finlayson, Minnesota. According to The Cut, the families who lived on the compound “sewed their own clothing, planted gardens, and traded goods and services like butchering, cabinet-building, and soap-making. There was no internet, no cell phones.”

4. He Made Headlines After Being Beaten in Prison in January

In January, Fox 9 reported that Barnard was “violently” assaulted in prison and rushed to the hospital.

According to the outlet, Barnard’s defense attorney, David Risk, had previously said that Barnard was receiving threats from fellow inmates.

Lindsay Tornambe and Jess Schlinsky both testified against Barnard. The latter said that she even tried to get pregnant in the hopes that Barnard would send her away. At one point during the trial, Schlinsky said, “I was terrified of making him angry so I didn’t struggle. I lived in constant fear of him.”

According to the Star Tribune, Schlinksy took notes in her journal, and marked down when the abuse would occur in a separate calendar. Barnard discovered the journal in 2005 and burned it, but he didn’t find the calendar.

Both Schlinsky and Tornambe admit to having mixed emotions after Barnard’s sentencing. “It’s an overwhelming feeling,” Schlinsky told the Star Tribune. “Everyone knows the truth of what happened to us, and I think that’s what’s most important to us.”

Read More
20/20
Convicted cult leader Victor Barnard will be at the center of tonight's episode of ABC's In an Instant.