A graduation ceremony in Long Island, New York ended violently after a vicious brawl broke out over the weekend. As reported by the New York Post, the two-and-a-half minute shows a group of people fighting and screaming at each other on the lawn in front of William Floyd High School.

While the video starts after the initial exchange has occurred, it does show footage of a woman who can be seen running over and punching and kicking one of the woman who are already on the ground. The woman’s attack is cut short, however, as bystanders and William Floyd security guards help break up things up. Several graduates can be seen wearing green caps and gowns in the video, while a voice offscreen can be heard screaming “Shut the f**k up, you p***y b***h!”

Watch the full video below.

After things quiet down, the woman on the ground is helped to her feet, and the video shows her face covered in blood. Lorenzo Saez, who recorded the video and uploaded it to his Facebook page this past Sunday, told New York Post that the fight was apparently between two families. “She got attacked first,” he explained, “She got hit in the face with a heel and then everyone was just fighting.” Saez said that”Security was trying to break it apart, but they weren’t doing a good job.”

“I was going to the parking lot,” Saez added, “I was standing in the front and taking pictures. And people just started fighting. First thing I do is pull my phone out, so I caught everything. It was crazy.” News12 Long Island also reports that Saez knows both of the women who can be seen in the video, and that the one whose face was covered in blood, is pregnant.

According to Newsday, Suffolk County police responded to the fight around noon on Sunday, but the crowd of people had dispersed by that time. No arrests were made on the scene.

William Floyd School District released a statement to CBS North Carolina following the fight: “We are disappointed by the actions of those who instigated the incident on what was a joyous occasion for out students and their families. District officials have met with law enforcement and we are pressing charges. As a school and community, we won’t let the small number of spectators involved in inappropriate behavior overshadow the accomplishments of so many wonderful students and families celebrating graduation day.”

The statement concluded: “Many of our students are headed to the finest colleges and universities in the world, will serve honorably in the armed forces or begin the initial steps of their careers after learning valuable skills in one of our career and technical education academies. Graduation day is about them.” 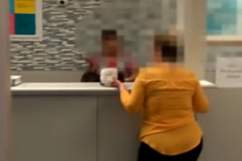