Andrew Bice, a 34-year-old career criminal, is accused of fatally wounding a San Antonio police officer and shooting a second officer before killing himself.

The second officer, who survived the June 29 double shooting, dragged his wounded partner away from the line of fire, despite being shot in the chin himself, and shot Bice in the buttocks, the police chief said in a news conference. Bice then died at the scene from a self-inflicted gunshot wound, according to the medical examiner.

Bice was no stranger to the criminal justice system before he took the life of a dedicated police officer, Miguel Moreno.

According to The Advocate, Bice was booked into St. Tammany Parish Jail on 29 different counts over a nine-year period.

1. Bice, Who Was a Car Washer, Was Accused of Shooting the San Antonio Police Officer in the Head

San Antonio police officers Miguel Moreno and Julio Cavazos were shot by Bice immediately after they exited their patrol car, police told The Advocate. They were going to question Bice and another person about a vehicle break-in.

Moreno was shot in the head and later died. Cavazos underwent surgery and is expected to recover, police Chief William McManus said during a news conference.

“I’m at a loss to describe what a tragedy this is,” he said.

People gathered to police headquarters Friday to mourn Moreno, leaving flowers and notes outside the entrance reading “blessed are the peacemakers” and “we back the blue.” One mourner was 9-year-old Tony Alamenda, who left flowers, prayed, and said that he wanted to become a police officer one day.

“This senseless act of violence against two courageous and committed law enforcement officers demonstrates the risk our men and women in blue face every day,” Abbott said in a statement. “We owe Officer Moreno and Officer Julio Cavazos a great debt of gratitude for their service and bravery in the face of danger.”

After being shot in the buttocks during the shootout while trying to flee, Bice shot himself in the head, according to The Advocate.

McManus said the second person wasn’t aware that Bice was going to pull a weapon and has been cooperating with investigators. He was arrested on outstanding municipal warrants but released.

2. Bice Had Over 30 Charges Over a Nine-Year Period

The St. Tammany Parish Sheriff’s Office in Louisiana confirmed to KSAT 12 that Bice has 29 charges on nine separate occasions over a period of nine years.

March 15, 2015
Operating a vehicle while intoxicates
No proof of insurance
Expired license plate
Driving with suspended license
Improper lane use

September 13, 2016
Improper lane use
No identification
Aggravated flight from an officer

According to The Advocate, it is unclear if Bice was convicted on any of the above counts.

Bice also had three charges in Bexar County, Texas including assault causing bodily injury against a family member, possession of a controlled substance, and evading arrest, according to KSAT 12. My San Antonio said that the charges took place from 2003 to 2006.

3. Bice Had a Self-Proclaimed Fiancee but His Mother Says They Broke Up

Shelia Landry told KSAT 12 that she had been dating Bice for over a year and that they were supposed to get married in February.

She told News 4 San Antonio that she is pregnant with Bice’s child.

Terri Lopez, Bice’s mother, said that Landry wasn’t engaged to Bice because he had to get a restraining order. Lopez also said that they broke up in November or December, according to KSAT 12.

Landry told KSAT 12 that she last talked to Bice at 1 p.m., Thursday. He told her that he had a gun and would pull up his shirt and show it to anyone who tried to mess with him. When she called back at 5 p.m. his phone was off.

“He texted me yesterday saying he felt so alone and he wanted me to come out there,” Landry said to KSAT 12. “I kept telling him, I’m coming. It’s going to be OK. Wait for me.”

She learned that he killed himself as she was preparing to leave for San Antonio, she told the TV station.

This was her reaction to Bice’s death on Facebook:

She also expressed condolences to Moreno’s family in the interview with News 4 San Antonio.

“The bottom of my heart goes out to his family and his loved ones,” she said. “For Real. I feel so bad.”

According to her Facebook page, Landry went to Fontainebleau High School in Mandeville, Louisiana and was in the class of 2013. She came from Chalmette, Louisiana and lives in Covington, Louisiana with her two children. She works in sales at Waffle House.

4. He Was on the Run From Louisiana

Landry told KSAT 12 that Bice committed a burglary in Mandeville and fled afterwards. She told him that she would get a lawyer to get him out of jail. “I didn’t want nothing bad for him,” she said. She said the warrant came out Friday, but the St. Tammany Parrish Sheriff’s Office was unable to confirm it.

Lopez told the television station that Bice was due in a Louisiana courtroom in August on a child abuse charge. She said Bice spanked Landry’s son after he urinated on him.

Lopez last talked to Bice on Tuesday morning. “Something spooked him to make him leave,” she said. He took his belongings, tried to get his last paycheck, and stopped answering Lopez’s calls and texts. He did not leave a note.

On Thursday, Lopez’s husband told her that some guns in their home were missing. “I thought he took those to sell for cash,” she said to KSAT 12.

5. He Was on Heroin and Terrified of Going Back to Jail

Landry told KSAT 12 that Bice was on heroin. “Very, very bad,” she said. “That’s why he stole what he stole from his job.” She said that he was using drugs in San Antonio and that she could tell that he was high on heroin when they last talked at 1 p.m.

She also told KSAT 12 that he was terrified of going back to jail. “He did not want to go back to prison for nothing in the world,” Landry said. She explained that Bice ran out of money and was about to start “popping cars” for cash.

Maybe he popped some cars before I could get out there, and that’s why the police came at him. And then when the police did come at him, that’s why he shot – of course – because he did not want to go back to jail. He was very scared to go back to prison for the rest of his life.

Lopez told the television station that Bice has been in trouble, but he’s not a violent person. “Him shooting a police officer would be the last thing on anyone’s mind,” she said. “Andrew was sweet, had a joyful spirit and a kind soul.”

McManus said that Bice was confirmed to be an employee for a car wash in Mandeville, although it was unclear whether he was still employed at the time of shooting.

According to Bice’s Facebook page, he was originally from Jersey City, New Jersey and lived in Abita Springs, Louisiana. 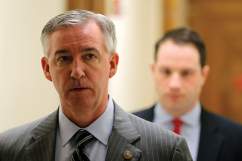 Loading more stories
wpDiscuz
0
0
Would love your thoughts, please comment.x
()
x
| Reply
Andrew Bice is accused of fatally wounding San Antonio police officer Miguel Moreno before shooting himself. He has a history of over 30 charges.