CNN reported they have tracked down the Reddit troll, HanAssholeSolo, who created the GIF President Donald Trump used showing “CNN” getting tackled in a wrestling match. In the GIF, pre-Presidential Donald Trump is shown with a superimposed Vince McMahon.

After the GIF went viral thanks to President Trump, CNN tracked down its creator, HanAssholeSolo, and threatened to expose him. According to the BBC, internet users claim that HanAssholeSolo is a 15-year-old, however, this has been disputed.

What is true is that HanAssholeSolo is a poster in a subreddit dedicated to Donald Trump and has frequently made anti-Semitic and racist posts.

Following CNN’s threats to expose him, online trolls called for violence against the press.

HanAssholeSolo has since issued this apology:

First of all, I would like to apologize to the members of the reddit community for getting this site and this sub embroiled in a controversy that should never have happened. I would also like to apologize for the posts made that were racist, bigoted, and anti-semitic. I am in no way this kind of person, I love and accept people of all walks of life and have done so for my entire life. I am not the person that the media portrays me to be in real life, I was trolling and posting things to get a reaction from the subs on reddit and never meant any of the hateful things I said in those posts. I would never support any kind of violence or actions against others simply for what they believe in, their religion, or the lifestyle they choose to have. Nor would I carry out any violence against anyone based upon that or support anyone who did. The meme was created purely as satire, it was not meant to be a call to violence against CNN or any other news affiliation. I had no idea anyone would take it and put sound to it and then have it put up on the President’s Twitter feed. It was a prank, nothing more. What the President’s feed showed was not the original post that was posted here, but loaded up somewhere else and sound added to it then sent out on Twitter. I thought it was the original post that was made and that is why I took credit for it. I have the highest respect for the journalist community and they put their lives on the line every day with the jobs that they do in reporting the news.

However, some critics online claim that CNN took it too far by threatening to expose the GIF creator. See the funniest memes below: 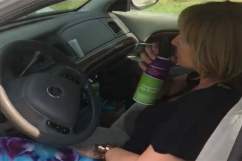