Twitter An aerial view of the Larsen C ice shelf in Antarctica.

One of the largest icebergs ever recorded has broken away from Antarctica, scientists say.

Scientists had been monitoring the massive break in the Larsen C ice shelf for over 20 years and started noticing the breakage occurring rapidly starting some time in 2016.

The iceberg measures 2,239 square miles — roughly the size of the state of Delaware — and weighs roughly 1 trillion tons. With the iceberg now floating on its own at the edge of The Antarctic Peninsula, the Larsen C ice shelf has been forever altered, being reduced by 12 percent, experts said.

To give a sense of the true dimensions of the Larsen C iceberg, here's an animation based on real data, with something familiar for scale pic.twitter.com/OdQA07qhBb

In the future, scientists expect the ice shelf to either regrow at a gradual pace or suffer from additional events that could lead to a total collapse.

“Our models say it will be less stable, but any future collapse remains years or decades away,” Professor Adrian Luckman of Swansea Unviversity and the MIDAS Project said in a statement following the event.

Research of the “natural” breakage and ice shelf is still ongoing, and it remains to be seen if it’s a direct result of climate change.

1. The Massive Piece Was Confirmed to Have Broken off on July 12

A look at the detachment map.

Experts from NASA’s Project MIDAS confirmed the separation of the Larsen C ice shelf with thermal imaging. They said that it occurred sometime between July 10 and July 12 when a massive section of it “finally” broke away, Professor Martin O’Leary, a Swansea University Glaciologist and member of the MIDAS project, and Luckman wrote in a blog post.

“We have been anticipating this event for months, and have been surprised how long it took for the rift to break through the final few kilometers of ice,” Luckman said in a statement.

Now that it’s split away from Antarctica, the iceberg is likely to be named A-68, scientists said. The final breakage of the ice shelf was detected by one of NASA’s satellite instruments named Aqua MODIS. The instrument takes images in the thermal infrared at a 1-kilometer resolution.

The volume of the iceberg is “twice that of Lake Erie,” researchers at Project MIDAS wrote.

2. Scientists Had Been Monitoring the Break Since Larsen A Collapsed in the 1990s

The Larsen C ice shelf has been closely monitored by scientists ever since the Larsen A ice shelf disintegrated in January 1995. The collapse of the ice shelf was considered a “signature event” when it happened, and it added a “substantial volume to the sea” when it slid into the ocean, Scientific American reported.

The fear after that ice shelf disintegrated, according to a 2007 report by the Intergovernmental Panel on Climate Change, was that the sea level would rise between 18 to 59 centimeters by 2100. However, other glaciologists said they were worried that climate change would accelerate glacier melt, which would push the sea level even higher than first thought.

Andrew Fleming of the British Antarctic Survey told Reuters that the ice shelf “shattered” like glass would and dissolved into the ocean.

“The Larsen B shattered like car safety glass into thousands and thousands of pieces,” Andrew Fleming of the British Antarctic Survey told Reuters. “It disappeared in the space of about a week.”

3. The Process of an Ice Shelf Breaking Away Is Considered Normal, but Scientists Are Monitoring to See If Climate Change Affected It

Luckman told CNN that his team of experts thinks that much of the iceberg has been left intact as it separated, adding that it’s considered routine behavior.

“This is part of the normal behavior of ice shelves,” he said. “What makes this unusual is the size.”

The process is known as calving and occurred on the ice shelf within the last few days. It happens during high summer in Antarctica and involves the “deep freezer warming up to become just a refrigerator,” a CBS News report said.

Researchers have said that it’s not so much the physical iceberg they’re worried about, it’s the raising of coastal tides around the world.

O’Leary said in a statement that the calving puts the Larsen C in a “very vulnerable position.”

Although this is a natural event, and we’re not aware of any link to human-induced climate change, this puts the ice shelf in a very vulnerable position. This is the furthest back that the ice front has been in recorded history. We’re going to be watching very carefully for signs that the rest of the shelf is becoming unstable.

4. The Largest Iceberg Ever Is Called the B-15

While the newest addition to the ocean is one of the largest icebergs in the world, the distinction of the biggest one ever belongs to one known as the Iceberg B-15. The one that just broke off of the Larsen C ice shelf is roughly half the size of it.

When it calved from the Ross Ice Shelf in March 2000, the iceberg measured 183 miles long, 23 miles wide and had a surface area of 4,2000-square-miles — larger than the entire country of Jamaica.

After it split free from the ice shelf, it split up into smaller icebergs and has been shrinking in size ever since.

Researchers from the University of Chicago and the University of Wisconsin-Madison installed weather and GPS systems on the iceberg back in 2011 and monitored its track and status. It found that in April 2005, the iceberg collided with the Drygalski Ice Tongue and broke off a 3.1 square mile piece of the tongue, requiring maps in Antarctica to be redrawn. 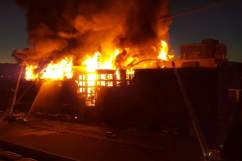 5. Researchers Expect Parts of the Massive Iceberg to Break Off

Now that the massive breakage has occurred, as was expected for some time, researchers said that they think it will follow the path of other icebergs similar in size. They expect some of it to stay intact for decades and other portions of it to continuously break into fragments. Other parts of it may float north to warmer waters, resulting in it melting into the sea.

Anyway you look at it, though, all scientists agree that additional research is required to determine the cause and results of the breakage.

“At this point it would be premature to say that this was caused by global warming,” Anna Hogg, who works for the Centre for Polar Observation and Modelling at the University of Leeds, told CBS News.

Project MIDAS scientists believe that the new iceberg won’t immediately raise sea levels, but an eventual impact would be felt — “at a very modest rate,” the organization wrote in the blog post.

Read More
Breaking News, Climate Change
wpDiscuz
4
0
Would love your thoughts, please comment.x
()
x
| Reply
A massive iceberg larger than the state of Delaware has broken off of the Larsen C ice shelf, the fourth largest in Antarctica.