WARNING: Some may find the following video disturbing

At least 17 people were shot during a Finese 2Tymes concert at the Power Ultra Lounge in Little Rock, AR early Saturday morning. No fatalities have been reported, according to police. More people were injured from being trampled on while trying to leave the club, according to Mirror.

No fatalities reported, but re: # of gunshot victims (17+) local PD says "This is big time, this is wow, we've never had nothing like this" https://t.co/imq3hcYyP1

Police responded to a call around 2:30 a.m. local time. One person was in critical condition and the other injuries did not appear to be life-threatening, according to ABC News.

Kimberly Rusley, from KATV, was told by a witness the shots appeared to have been fired from the second floor of the club. Witnesses told KATV that shots were fired in the crowd and then shots were returned from the stage.

The suspect or suspects are still at large, and it is believed they left the scene in a Mercedes Benz or Dodge Charger, according to Mirror.

The Little Rock Police Department tweeted that they “do NOT believe this incident was an active shooter or terror-related incident,” and “it appears to have been a dispute at a concert.”

We do NOT believe this incident was an active shooter or terror related incident. It appears to have been a dispute at a concert.

Police have now confirmed that all 17 shooting victims are alive, and the victim who was in critical condition has been upgraded to stable condition. The youngest victim was a 16-year-old, according to NEWS18.

#UPDATE as of now ALL 17 confirmed shooting victims are alive. We will provide additional updates as needed.

#UPDATE our victim in the mass shooting that was critical has been upgraded to STABLE. Please call MC with info at 371-4660.

Update: Little Rock Police Department now says that 25 people suffered gunshot wounds and 3 more were wounded from other injuries. All are expected to survive.

Anyone with information about the incident should call 371-4660.

Another video, which was shared on Facebook Live, shows attendees at the club enjoying the music until the shooting occurred. The shooting begins shortly after the 4-minute mark in video. The camera is dropped during the shooting and picked up about a minute later and shows some of the aftermath.

Investigators also looking for evidence outside the club pic.twitter.com/mAi6uRCtcD

The Little Rock Police Department has announced they will be holding a press briefing today at 3:00 p.m.

This is a developing story 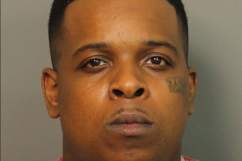