Thomas Homan is the acting director of Immigration and Customs Enforcement, also known as ICE, under President Donald Trump. Homan is supporting Trump’s fight against MS-13, an international gang that has spread throughout North America and into Central America.

The 56-year-old Homan has been working in law enforcement for over three decades, beginning in his native New York before moving to Texas. He worked as a U.S. Border Patrol agent, and has been working at ICE since it was founded in 2003.

Here’s what you need to know about Homan.

1. Homan Warned MS-13 That His ‘Gang Is Bigger Than Theirs’

Trump turned his attention to MS-13 in April, during a speech before National Rifle Association members. “It’s not pleasant for them anymore. That’s a bad group. Not pleasant for MS-13 — get them the hell out of here, right? Get them out,” Trump told the office. Trump also tweeted about the group, claiming that the Obama Administration “allowed bad MS 13 gangs to form in cities across the U.S.”

A 2010 University of Pittsburgh paper explains that MS-13, also known as “Mara Salvatrucha,” was actually born in Los Angeles during the 1980s and was mostly made up of El Salvadorians fleeing their country. The gang began to grow in Central America after members were deported back to their native country.

On July 27, the Department of Justice announced that 113 MS-13 members were charged in El Salvador, timed with Attorney General Jeff Sessions’ visit. 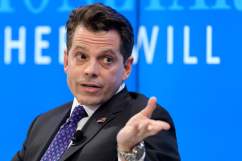 Homan has a blunt viewpoint on sanctuary cities, which are cities and local governments that do not cooperate with federal immigration laws. He told the Washington Examiner that he thinks they are “un-American” and called Chicago, New York City, San Francisco and Philadelphia the worst.

“In the last year, I’ve read all these stories of how the crime rate has exploded in Chicago, and the president’s trying to help them. We’re stepping up our game in Chicago. Is Chicago doing everything that it can to decrease the criminal activity up there? I say no,” Homan told the Examiner. He complained that his officers haven’t been allowed in Chicago and Cook County jails and authorities there aren’t sharing information with his.

“These jurisdictions, these cities, are choosing to shield people who violated the laws of this country that committed a crime against this country; they’re going to shield them,” Homan told the Examiner. “So, what’s next? Sanctuary cities for people who don’t want to pay their taxes?”

Homan also told the Washington Times that he wants to see the leaders of sanctuary cities charged with breaking federal anti-smuggling laws. He added that their refusal to cooperate is counterproductive.

“I think these sanctuary cities need to make sure they’re on the right side of the law. They need to look at this,” he told the Washington Times. “Because I am.”

In 2015, while Homan was working as Executive Associate Director of ICE, President Barack Obama awarded Homan with the Presidential Rank Award as a Distinguished Executive. It’s the highest civil service award and only two other members of the Department of Homeland Security received one that year.

In an interview with the Washington Post in 2016, Homan said he was “frustrated” by the assumptions people made of Obama’s immigration policies.

Before becoming acting director, Homan went through every position at ICE, joining the agency when it was created in 2003. It is part of the Department of Homeland Security.

“The entire life cycle of immigration,” the Upstate New York native told the Post of his career. “I’ve arrested aliens. I’ve sat on low houses. I’ve worked on the front lines. I’m a cop in a cop’s job, and cops work for me,” he said, crediting his 27 years in immigration enforcement with earning him the respect of the 8,000 men and women on his staff.”

The Obama Administration specifically honored Homan for his management of deportations of illegal immigrants with criminal records, with the help of a new expanded fingerprinting system created with the help of local police departments. “We executed the mission perfectly,” Homan said.

Homan’s association with the Obama Administration made him a target of the conservative media. Brietbart quoted an ICE officer who said it was a “disgrace” to have Homan leading the agency. Newsmax noted that Homan helped write Obama’s immigration policies.

4. Homan Said Undocumented Immigrants ‘Should be Afraid’ Under the Trump Administration

While in Miami in June, Homan made it clear that he will follow Trump’s hard-line approach to illegal immigration as his ICE director. He told CNN that he didn’t regret telling Congress that undocumented immigrants “should be afraid.” He thought it needed to be said.

Homan’s CNN interview followed his testimony before a House appropriations subcommitee, in which he said, “If you’re in this country illegally, and you committed a crime by entering this country, you should be uncomfortable. You should look over your shoulder.”

During that testimony, Homan also asked for more funds to help ICE, especially if the agency wants to follow though with Trump’s promise to arrest more illegal immigrants.

In his CNN interview, Homan called it unfair for ICE agents to be vilified as people who separate families.

5. Homan Worked on the Scene of the Deadliest Human-Trafficking Incident in U.S. History in 2003

Homan’s work on immigration is influenced by his work on a 2003 case that was the deadliest human-trafficking incident in U.S. history. The case earned more attention this month after eight people were found dead in a tractor-trailer in San Antonio.

In the 2003 case, 19 illegal immigrants suffocated and died in an airless trailer hauled by driver Tyrone Williams in May 2003. The trailer was found in Victoria, Texas. Williams was convicted on 58 counts related to the incident. He was paid $7,500 to haul a group of 60 illegal immigrants past a border patrol checkpoint. Williams was re-sentenced to 34 years in prison in January 2011.

Homan noted that the five-year-old was “found under his father wrapped in his arms.” He told CNN, “Through interviews we were told it was so hot people were passing out and dying. They knocked out the back lights on the truck to try to draw attention from other drivers. They wanted to put the child out the hole but his father protected him.”

Read More
5 Fast Facts, Donald Trump, Politics
wpDiscuz
2
0
Would love your thoughts, please comment.x
()
x
| Reply
Thomas Homan is the acting director of Immigration and Customs Enforcement (ICE), who was honored by Obama and now works for Trump. Here's a look at his career.