Newly-released security footage from a nightclub and a college dorm have cleared a 20-year old college student charged with rape.

In April, Armaan Karim Premjee, who attends the University of Southern California, was accused of sexual assaulting a 19-year-old woman, who also attends the school, after night out ended with the two having sex in her dorm room.

The Los Angeles Police Department officially charged Premjee in May, and he faced up to 10 years in prison if convicted. He pleaded not guilty at his arraignment and was released from police custody following the hearing after posting $100,000 bond.

The incident started after the two met at Banditos Taco & Tequila in Los Angeles on April 1. Prosecutors had alleged that Premjee sexually assaulted the woman in her dorm room on the USC campus shortly after 1 a.m. on April 1.

“The victim’s roommate walked in when the alleged crime occurred,” the Los Angeles County district attorney’s office said to the Los Angeles Times. “Premjee went into a bathroom and when he returned, the roommate confronted him and he left.”

Premjee said he assumed everything was fine when and went back to his residence. That was until hours later, when officers showed up at his door and brought him into custody.

“They handcuffed me, took me away and put me in a cell,” he said to Inside Edition, saying there was consent between the two. “She was the initiator, she was the aggressor. She was able to stand on her own two feet she was leading the way.”

But security footage from the bar and the dorm show the woman kissing Premjee and holding his hand as she leads him out of the nightclub and out onto the street. In the video, the unidentified woman appeared to make sexual gestures to a friend before the two leave in a vehicle and travel to her dorm, where the woman checked Premjee in at the front desk.

Watch the surveillance footage in the video below:

Premjee has claimed his innocence since he was charged, and accused the woman of wanting to leave the club to have sex.

“She put her arms around my neck, she started kissing me within two minutes of meeting me for the first time,” Premjee told Inside Edition.

With the assistance of the surveillance video, the charges against him were dropped by a judge July 31.

Premjee told Inside Edition during the interview that he feels “vindicated” by the judge’s decision and said he was thankful for that the surveillance footage existed.

“If it weren’t for these videos I don’t know what I would have done,” Premjee told Inside Edition. “I’m very grateful for these surveillance tapes.” 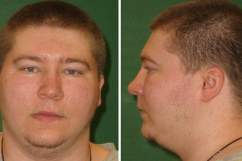 READ: Panel of Judges Orders Brendan Dassey’s Case to Be Reheard in September