According to the Austrian Kurier, the rescue helicopter was hovering above the ground to help the patient when a gust of wind pitched the aircraft hard as the rescuers attempted to board.

In the video, a man in bright yellow is seen running from the aircraft as the pilot loses control. The helicopter spins in a circle as the rotor blades slice the ground near him. The rescuer runs for his life as the blades shatter and send debris everywhere.

The helicopter eventually crashes on its side.

Fortunately, nobody was killed.

Kleine Zeitung writes that the the patient with heart problems was eventually taken to Lienzer Hospital and is now “well-off.”

The helicopter crash was followed by another incident on Grossglockner that required an air rescue, too. On Wednesday afternoon, a group of mountaineers’ rope snapped, causing severe injuries to one person. The group was rescued under difficult weather conditions, writes the Kurier. 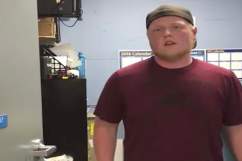 Loading more stories
wpDiscuz
1
0
Would love your thoughts, please comment.x
()
x
| Reply
A helicopter rescue team in Austria that was attempting to save a man suffering from heart problems had to be rescued too after a gust of wind caused the helicopter to crash.