A possible truck ramming attack with a rental van has taken place in Barcelona, Spain when a driver ran into a crowd. Gun shots have also been reported. 12 people are confirmed dead with at least 80 injured.

Two men have been reported fleeing the van, per Reuters.

According to Spanish journalist Marta Pastor, one of the men is believed to be from the Maghreb, a region in Northwest Africa. The countries within the region usually include Morocco, Algeria, Tunisia, and Libya. 324 reports that there are two armed men with hostages in the Turkish restaurant Luna d’Istanbul. However, this information may be false as there has been no updated information of a standoff in over an hour.

A3 News reports that a passport has been found in a van belonging to a Spanish citizen based in Melilla, on the north coast of Africa.

El Pais writes, “[Las Ramblas] is now cordoned off and the downtown settlements have been evacuated… Police sources have explained that it is a white van that ran down several people, and after the driver fled on foot.” They add that the driver ran over people while they were attempting to cross the street during a traffic light.

There has just been a massive trampling on the Ramblas in Barcelona by a person with a van. There are injured

They have also asked the public to not use public transit.

La Rambla, sometimes pluralized as “Las Ramblas,” is a a street in central Barcelona, popular with both tourists and locals.

Is the Islamic State to blame for the attack?

No terrorist organization, including ISIS, has made a claim of the alleged attack yet. However, ISIS channels are celebrating it.

Car ramming is a hallmark of ISIS attacks.

As of now it is unclear if ISIS is behind the attack in Spain. Check back for updates. 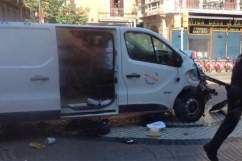 Read More
Spain, Terrorism
wpDiscuz
0
0
Would love your thoughts, please comment.x
()
x
| Reply
A possible truck ramming attack with a rental van has taken place in Barcelona, Spain when a driver ran into a crowd.