The Wikipedia summary of Joel Osteen, the celebrity pastor of Lakewood Church who drew fire over his response to allegedly closing its doors to Hurricane Harvey victims, has been vandalized. In it, the troll called the 54-year-old Texan pastor a “financial predator” and an “agent of mammon.”

According to Bible Study Tools, mammon is “a Chaldee or Syriac word meaning ‘wealth’ or ‘riches’.” The word has been used since medieval times “as the name of the devil of covetousness,” writes Dictionary.com.

You can see a full screenshot of the vandalism below. The Wikipedia page has since been fixed.

Osteen is a preacher of prosperity theology, which claims that God bestows material wealth to those who believe.

More recently, Osteen drew the ire of the online community when it was revealed through social media that his megachurch, which was the former home of the Houston Rockets and can fit tens of thousands of people in it, wasn’t offered up to house those affected by Hurricane Harvey. Instead, Osteen sent out a flurry of tweets asking people to pray for the Houston community.

It was then claimed by Donald Iloff, church spokesman and Osteen’s father-in-law, that areas of the church had been flooded and that’s why they were unable to house Houstonians, according to CNN.

However, a viral video by Sean Salisbury, seemed to contradict Iloff’s claim:

Just offer shelter and a dry place for those who need you and want to know you care. .@JoelOsteen those who can't get here still need you! pic.twitter.com/MdHAHWGprR

Whatever the case, Lakewood Church has since been active in showing that they are planning to help refugees of Harvey:

Osteen announced that the church would open to the affected “once shelters reach capacity.” It is unknown when that will be. 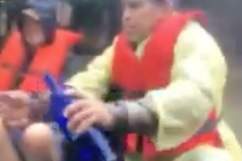 Read More
Google, Hurricane Harvey, Texas, Wikipedia
The Wikipedia summary of Joel Osteen, the celebrity pastor of Lakewood Church who drew fire over his response to allegedly closing its doors to Hurricane Harvey victims, has been vandalized.