Getty Ken Frazier at the White House in 2012.

Ken Frazier, the CEO of pharmaceutical giant Merck & Co., resigned from President Donald Trump’s American Manufacturing Council to protest Trump’s reaction to the violence in Charlottesville, Virginia on Saturday. Less than a month ago, Frazier stood by Trump’s side to announce a new project at the White House.

Frazier, an African American lawyer, joined Merck in 1992. He became CEO in 2011 and also serves as chairman and president. According to FiercePharma, the 62-year-old Frazier earns $1.5 million in salary, $3.28 million in stock and $3.8 million worth of options. He also gets $2.5 million in incentive pay, $4.32 million in pension growth and deferred compensation, plus $57,850 in perks.

Here’s what you need to know about Frazier and his relationship with Trump.

In a statement on Merck’s Twitter page, Frazier announced that he resigned from the President’s American Manufacturing Council.

“America’s leaders must honor our fundamental values by clearly rejecting expressions of hatred, bigotry and group supremacy, which run counter to the American ideal that all people are created equal,” Frazier said. “As CEO of Merck and as a matter of personal conscience, I feel a responsibility to take a stand against intolerance and extremism.”

“Now that Ken Frazier of Merck Pharma has resigned from President’s Manufacturing Council,he will have more time to LOWER RIPOFF DRUG PRICES,” Trump tweeted in response.

Trump was widely criticized by politicians on both sides of the aisle on Saturday for not specifically denouncing white supremacists after a person was killed when a car plowed into counter-protesters at the “Unite The Right” tally in Charlottesville, Virginia.

“We condemn in the strongest possible terms, this display of hatred, bigotry and violence on many sides. On many sides,” Trump said during his Saturday speech.

It wasn’t until Sunday and Monday that members of Trump’s administration started publicly denouncing white supremacists. Attorney General Jeff Sessions told the media Monday that the attack was “domestic terrorism.” 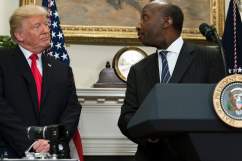 2. Frazier Was at the White House in July to Announce a New Venture, With Trump by His Side

Frazier joined Trump’s American Manufacturing Council on January 27. “President Trump plans to continually seek information and perspectives from a diverse range of business leaders, including those listed below and others, on how best to promote job growth and get Americans back to work again,” the White House said of the advisory board.

On July 20, Frazier went to the White House to meet with Trump during “Made In America Week.” As NJ.com reported, Trump announced that Merck, Pfizer and Corning were working together to make “valor glass,” a pharmaceutical glass packaging for vials and cartridges.

“This initiative will bring a key industry to our shores that for too long has been dominated by foreign countries,” Trump said at the announcement. “This announcement reflects a central theme of my administration that when we invest in America, it’s a win for our companies, our workers, and our nation as a whole.”

The project is expected to create 1,000 new jobs, including some at Corning’s Vineland, New Jersey plant.

“Biologics today are on the leading edge of scientific innovation, and valor glass represents a similar advancement in materials science: glass that is purpose-built for medicines and vaccines,” Frazier said in July. 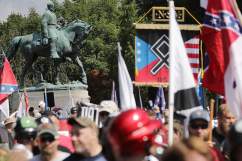 In November 2011, Frazier was picked by the Penn State board of trustees to lead the committee investigating the Jerry Sandusky child sex abuse scandal. The committee hired Freeh, Sporkin & Sullivan to investigate, and the result was the Freeh Report.

“I believe that we are entitled to look at the words and contemporaneous emails and other documents that draw the conclusions that we need to draw as a university,” Frazier said.

Frazier then issued several apologies. ““I employed an analogy that was unhelpful. Absolutely no offense was intended. I apologize,” he said in the first apology. After consultation with Merck, a longer apology was issued in a Centre Daily Times letter to the editor.

“One of my core values is to treat people equally based on their abilities and character. This is likewise a fundamental value at both Penn State and Merck. The words I used did not reflect that principle,” Frazier wrote. “I hope that people will see my comments for what they were: a momentary lapse in judgment in the heat of frustration, and not a reflection on what I truly believe and stand for. My commitment to racial equality, diversity and social justice is well-established, and deepens my regret that my poorly chosen words have distracted from the important issues at Penn State.”

WATCH: Scaramucci Says Trump ‘Needed to Be Much Harsher’ on White Supremacists

4. Frazier Is the First African-American CEO of a Major American Pharmaceutical Company

Frazier has been at Merck since 1992, after working as a lawyer at Drinker Biddle. The Harvard Law School graduate first worked as general counsel and was promoted to senior general counsel in 1999. During his tenure as a company lawyer, he led Merck’s defense against litigation involving Vioxx. The Vioxx crisis ended with Merck paying out a $4.85 billion settlement, notes Reuters.

In 2006, he was promoted to executive vice president, then president of Merck & Co in 2010. In 2011, he was named CEO, becoming the first African-American to lead a major American pharmaceutical company.

“My biggest accomplishment is staying the course, I would say, at a time when investors are increasingly skeptical of pharmaceutical research and development,” Merck told the Associated Press in 2013. “We are one of the companies that didn’t cut our research budget. We said we weren’t going to do that, and our stock got pounded initially. (The stock price fell 17 percent in barely 9 months, then steadily rebounded, climbing from just under $30 to around $43 now.) I’m feeling a lot better about it than I was a year ago.” 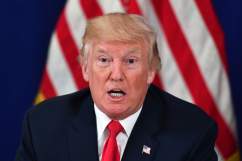 5. Frazier’s Father Died From Alzheimer’s Disease, So He Wants to Find a Cure

Frazier is motivated to find a cure for Alzheimer’s Disease because his late father suffered from the disease. Frazier told the Associated Press that his father was a janitor who spent his last days at Frazier’s home with his wife. Frazier’s mother died when he was a child.

“My father, to me, was 10 feet tall,” Frazier told the AP. “To see this disease take away his brain and to see him rendered like a child, it was devastating.”

“At 85 you have a one in three chance of getting Alzheimer’s or that form of dementia, so this is an incredible tsunami that’s hitting our society given the fact that people are living longer,” Frazier told Fox Business in January 2017.

He added that Merck is developing a new drug to treat it.

“We have a drug that we’re actually going to get data on in the middle of 2017. It’s called a BACE inhibitor. And what we know from human genetic studies is if you have lower levels of BACE, you’re much less likely to have dementia,” he told Fox Business. “What we need is a drug that slows down the death of the neurons, slows down the dementia process.”

Loading more stories
wpDiscuz
5
0
Would love your thoughts, please comment.x
()
x
| Reply
Ken Frzier, the CEO of Merck, announced that he is leaving Trump's manufacturing council over Trump's response to Charlottesville. Here's a look at Frazier.