Getty President Donald Trump makes an announcement on the introduction of the Reforming American Immigration for a Strong Economy (RAISE) Act with Sen. Tom Cotton (R-AR) left, and Sen. David Perdue (R-GA) right, in the Roosevelt Room at the White House on August 2.

President Donald Trump is moving forward with his campaign vow to reform immigration into the United States.

Alongside Republican Sens. Tom Cotton of Arkansas and David Perdue of Georgia, Trump laid out the details of the Reforming American Immigration for Strong Employment (RAISE) Act, which would slash legal immigration levels in half over the next 10 years and favor admitting English speakers into the country.

“This would be the most significant reform to the immigration system in half a century,” Trump said at the press conference. “It is a historic and very vital proposal.”

The Department of Homeland Security issued a statement shortly after the press conference saying that it also supports the legislation.

Following DOJ, DHS now out with a statement in support of the RAISE Act pic.twitter.com/AdzbHYjTjW

Here’s what you need to know about the RAISE Act:

1. The RAISE Act Would Limit Access to Green Cards

If the RAISE Act were to pass, it would represent a huge shift in immigration laws in the U.S., which in the past have promoted immigrants to travel to the country for work or to join family members that already reside in the country.

One of the highlights of the RAISE Act is that it would implement what Trump, Cotton and Perdue called a “merit-based system.”

It would reform the way extended family members of U.S. citizens get green cards by giving those with work-based skills priority. The goal of the RAISE act would be to clamp down on the amount of green cards issued and change the country from distributing about 1 million of them to about 500,000 per year.

In addition, it would prohibit those legal immigrants who hold green cards from receiving welfare, although they will still be required to pay into the state and federal tax system.

“The RAISE Act prevents new immigrants and new migrants from collecting welfare, and protects U.S. workers from being displaced,” Trump said. “That’s a very big thing. They’re not going to come in and just immediately go and collect welfare. That’s not going to happen under the RAISE Act, they can’t do that.”

Currently, a majority of immigrants can’t get food stamps, Medicaid or Social Security from the government until they’ve resided in the country for at least five years.

The RAISE Act would also limit refugee visas to 50,000 per year.

2. The Act Would Get Rid of the Diversity Visa Program

According to language in the bill, it would amend the Immigration and Nationality Act by eliminating the Diversity Visa Program, also known as the green card lottery. The lottery has been a congressionally-mandated lottery program to receive a permanent resident card that was established by the Immigration Act of 1990.

The lottery is typically administered by the Department of State and makes 50,000 permanent resident visas available every year and distributes them in an effort to diversify the immigrant population in the country. Typically, it selects applicants from the countries that have had a low rate of immigration five years prior.

The visas are usually distributed to those seeking immigration from Africa, Asia, Europe, Latin America, North America and Oceania. 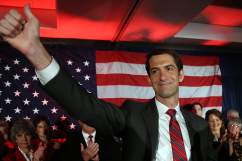 Tom Cotton participates in a conversation about American foreign strategy and statesmanship at the Hudson Institute March 18, 2015 in Washington, DC.

Trump promised that passing the legislation would “reduce poverty, increase wages and save taxpayers billions and billions of dollars.”

The way he would do it is by favoring English-speaking immigrants that apply for green cards and those that come to the U.S. with some kind of skill.

“This competitive application system will favor applicants who can speak English, financially support themselves and their families, and demonstrate skills that can contribute to the US economy,” Trump said.

In essence, the RAISE Act would take into account whether or not an immigrant has a skill they can add to the economy, see if they can pay their own way and whether or not them entering the job market would displace a U.S. citizen from their workplace, White House Adviser Stephen Miller said at the August 2 press briefing.

Later in the briefing, Miller got into it with CNN White House Correspondent Jim Acosta, who questioned if the act violated the U.S. principle that’s written on the Statue of Liberty.

The text says: “Give me your tired, your poor, your huddled masses.”

“The poem that you’re referring to was added later,” Miller said.

Full exchange between Stephen Miller & @acosta on Statue of Liberty & immigration. "It reveals your cosmopolitan bias to a shocking degree." pic.twitter.com/9eHTiNaR4G

The argument between the two lasted over six minutes, and later on Acosta questioned the idea of requiring immigrants to learn English prior to immigrating to the U.S.

“Are we just going to bring in people from Great Britain and Australia?,” Acosta asked.

“I have to honestly say,” Miller said. “I am shocked at your statement that you think that only people from Great Britain and Australia would know English. It reveals your cosmopolitan bias to a shocking degree…This is an amazing moment.”

4. The RAISE Act Was Introduced Into Congress in February

David Perdue arrives at Trump Tower for a meeting with President-Elect Donald Trump.

The RAISE act was first introduced by into Congress by Perdue and Cotton back in February, but the legislation stalled. It was read twice in Senate, and then referred to the Committee on the Judiciary on February 13.

Now, Perdue and Cotton are back with a bill that’s been slightly altered and has Trump’s full backing.

5. One of Trump’s Campaign Promises Was to Reform Immigration Into the U.S., but He Said He Didn’t Want to Cut Legal Immigration

During his presidential campaign, Trump frequently spoke out against illegal immigration and accused the illegals of stealing jobs from workers and bringing crime into the U.S.

So far as president, Trump’s pushed for a border wall between Mexico and the U.S. and implemented a travel ban on those from six Mulsim-majority countries.

Read More
Donald Trump, Immigration, Politics
President Donald Trump on August 2 laid out his support for the RAISE Immigration Act in Congress. Find out what the act is all about.