President Donald Trump will deliver an address to the nation regarding the future of the United States Military in Afghanistan. His speech will be from Fort Meyer in Arlington, Virginia and is scheduled to start at 9 p.m. Eastern. It can be viewed via the live stream above.

When Trump takes the podium, he’ll be the third president in the 16-year history of the war in Afghanistan to put forth a policy regarding the future of the conflict.

Monday’s primetime address will be the most significant national security address of Trump’s tenure, and it will likely reveal his plans going forward after previously speaking out about the need to withdraw troops from the Middle Eastern country.

A White House statement that Trump would speak to Americans regarding “a path forward for America’s engagement in Afghanistan and South Asia.”

The "South Asia" part of this White House statement will be interesting. What countries will Trump discuss in addition to Afghanistan? pic.twitter.com/YlXSOKFcUz

The speech comes as Taliban forces have recently resurfaced in the country and gained ground against government forces.

In June, Defense Secretary Jim Mattis received the approval to send as many as 3,900 troops to Afghanistan so that the U.S. military could train the Afghan forces and support them with military power. However, Mattis has balked at the move so far until the Trump administration could come to an agreement on an encompassing strategy. Now, it appears that strategy has been formed.

On Sunday, when asked about Monday’s speech, Mattis largely withheld details of Trump’s plan, instead telling reporters on a flight to Amman, Jordan that “the president has made a decision.”

“I am very comfortable that the strategic process was sufficiently rigorous,” Mattis said.

Trump has long been a skeptic of the current situation in Afghanistan. He’d often criticize U.S. involvement in the country, calling for a “speedy withdrawal” in tweets when he was considering a run to be the Commander in Chief.

Let’s get out of Afghanistan. Our troops are being killed by the Afghanis we train and we waste billions there. Nonsense! Rebuild the USA.

I agree with Pres. Obama on Afghanistan. We should have a speedy withdrawal. Why should we keep wasting our money — rebuild the U.S.!

Trump continuously accused the government of “wasting” taxpayers dollars in Afghanistan “almost daily,” saying that money should instead be used to “rebuild the U.S.”

Our gov't is so pathetic that some of the billions being wasted in Afghanistan are ending up with terrorists http://t.co/bso3k1pR7l

But instead, according to senior officials at the White House who spoke with The New York Times, Trump will seek to send as many as 4,000 additional troops to the country.

Currently, there’s about 8,400 U.S. troops stationed in Afghanistan. According to CNN, about 6,900 of those are “assigned to the NATO mission to train and advise Afghan security forces alongside approximately 6,000 troops from other NATO countries.”

The War in Afghanistan started in 2001 when the U.S. invaded the country following the September 11, 2001 terrorist attacks.

Click below to read more about Trump’s previous stance on the withdrawal of troops from Afghanistan. 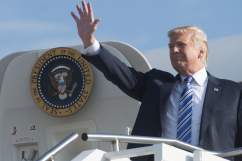 Donald Trump & Afghanistan: President Has Called for Withdrawal of Troops in the Past

Read More
Afghanistan, Donald Trump, Politics, US Politics
wpDiscuz
0
0
Would love your thoughts, please comment.x
()
x
| Reply
President Donald Trump is delivering an address on the future of the U.S. Military in Afghanistan. Watch a live stream of the speech.