Police say that the suspect in the Freeman High School shooting came to school with more than one gun. Caleb Sharpe has been named as the teenage suspect in the attack that killed one person and wounded three others on September 13 in the small town of Freeman, about 12 miles south of the Spokane Valley in Washington State. The shooting was reported at around 10:30 a.m. local time. Reports of a second shooter proved to be untrue. Sharpe is a sophomore at Freeman High School.

The Spokesman says in their report that the first call across police radio was, “Freeman High School. Gunshots or stabbing. Stand back.” The newspaper later reported that Sharpe had allegedly been armed with a AR-15 rifle and a handgun.

1. The Spokane County Sheriff Has Speculated that Bullying May Have Been the Motive

A sophomore, Michael Harper, 15, at Freeman High School told the Associated Press that Sharpe “had long been obsessed with past school shootings.” Harper added that at the start of the school year, Sharpe had brought a note to school saying that he “might get killed or jailed.” After that, classmates told counsellors about Sharpe. Harper went on to describe Sharpe as “nice and funny weird” while being popular with “many friends.”

KOMO News reports that a school counsellor had been taking care of Sharpe after what appeared to be a suicide note had been found at his home.

In March 2017, the Spokesman wrote a feature about a student who was forced to leave Freeman High School due to bullying.

Sharpe is active with his YouTube channel where he went by the pseudonym Mongo Walker. You can check out his videos, including one where he mock-executes a friend here: 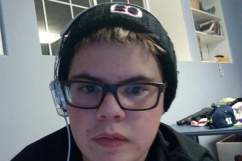 2. Sharpe’s Obsession With TV Shows Is Clear From His Social Media Pages Including the Controversial 13 Reasons

Michael Harper told the Spokesman that Sharpe was “weird. And he loved the show Breaking Bad. He never really seemed like that person who had issues. He was always nice and funny and weird.”

Sharpe’s obsession with certain TV shows is clear from his social media pages. On his Facebook page, Sharpe jokes that he works at the Krusty Krab, a reference to Spongebob Squarepants. While on his Instagram page, where Sharpe goes by the moniker Walrus Meat, Sharpe’s most recent post makes a reference to Breaking Bad. While on June 21, Sharpe wrote that Netflix’s controversial series 13 Reasons Why was the “Best show on Netflix.”

The Washington Post wrote extensively about the cultural impact of 13 Reasons Why, particularly the viewpoint that the show was encouraging teenage self-harm.

There are also references to Game of Thrones and American Dad as well as movies American Psycho and the Star Wars franchise.

An unnamed Freeman High School student told the Daily Mail that Sharpe had recently sent a Snapchat photo showing him watching a documentary about school shootings.

In the aftermath of the shooting, that student told the Mail, “I was thinking that maybe it wasn’t my friend but then I had an idea it was all the documentaries he’s been watching and thinking he sent me a picture of Snapchat when we were talking and it was documentary and I was like: “There’s no way he could do this!” Now I’m thinking he might actually have gone through with it.”

On September 14, Sheriff Knezovich told the media that Sharpe was “sucked into a counterculture” of violence. Knezovich added, “This is a state and national issue that (society) better start dealing with. We’ve got a mess out there. We need to fix it.” 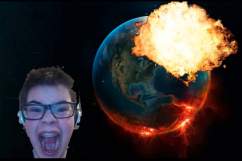 3. A Parent Referred to Sharpe & Sam Strahan as ‘Best Friends’

Go Fund MeSam Strahan pictured on a Go Fund Me page for him and his sister.

A woman with a child at Freeman High School told KING5 that the victim and Sharpe were “known as best friends.” That victim is thought to have confronted the suspect after the suspect’s gun jammed. Authorities say Sharpe had a backup gun. Spokane County Sheriff Ozzie Knezovich told the media:

Today that student came to school, armed. He entered the school and proceeded to take his weapons out. He attempted to fire one weapon and it jammed. He went to his next weapon and a student walked up to him, engaged him and that student was shot.

The Spokesman was the first to name the fatal victim as Sam Strahan.

Sheriff Knezovich then said that the suspect fired three more shots down a hallway, wounding three others.

Speaking to the Spokesman, Cheryl Moser, the mother of a freshman at Freeman said, “He called me and said, “Mom there are gunshots.” He sounded so scared. I’ve never heard him like that… You never think about something happening like this at a small school.”

While a student, Cory Therman, told KING5, “I felt like I was in a stampede.” Therman said that the shooting occurred just after the first bell as the start of the school day had been delayed. 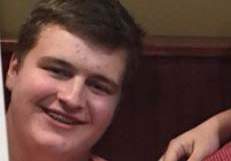 4. Sharpe Is Being Held at the Spokane County Juvenile Detention Center

Amid the rumors of the fate of Sharpe, Brian Schaeffer of the Spokane Fire Department told the media in the aftermath of the shooting that Sharpe had been taken into custody. The Spokane sheriff said that Sharpe was arrested by the school resource officers who is also a sheriff’s deputy.

It is likely that Sharpe will be tried as an adult. Sheriff Knezovich said in his remarks to the media, “These are senseless and tragic events that don’t need to happen. I don’t understand them, I don’t think anybody can make any sense out of this. We need to figure out what’s gone wrong with our society that our children decided they need to take weapons out to deal with the issues they’re facing.”

KING5’s Alex Rozier reports that Sharpe’s parents have attempted to talk to their son but have been unsuccessful.

5. All of the Injured Victims Are in Stable Condition

The Spokesman has identified the victims as Emma Neese, Jordan Goldsmith and Gracie Jensen. They are all female. Student Barratt Moland, 15, told the Spokesman that Neese was hit in the abdomen. Moland said, “She didn’t even notice [she had been hit]. She said it only grazed her.”

A day before the shooting, Freeman High School had held a lockdown drill.

The town of Rockford is a small community located close to the Idaho border. Washington Governor Jay Inslee said in a statement, “All Washingtonians are thinking of the victims and their families, and are grateful for the service of school staff and first responders working to keep our students safe.”

The Spokane School District has released a guide for parents on how to talk to their children about the attack.

Loading more stories
wpDiscuz
25
0
Would love your thoughts, please comment.x
()
x
| Reply
Police say that the suspect in the Freeman High School shooting came to school with more than one gun.