Hurricane Maria is currently a Category 1 storm. She is moving west northwest at 15 mph with her sights set on Puerto Rico — and beyond. Maria is expected to strengthen even more as she coasts over the warm waters of the Caribbean. She is expected to impact Puerto Rico as a Category 3 storm by Wednesday, according to the National Hurricane Center.

At this time, the National Hurricane Center has not issued a tropical storm or hurricane watch or warning for Puerto Rico. However, that is expected to change over the next 24 to 48 hours as tropical-storm-force winds could arrive in the area as early as Tuesday morning. However, the “most likely” scenario has tropical-storm-force winds approaching Puerto Rico on Wednesday morning.

As a Category 3 storm, Maria will bring heavy rain and wind to the island of Puerto Rico. The current projected track for Maria brings her straight over the island, impacting the whole nation. You can see the latest map below.

‌Currently, there is a 40 percent chance that Puerto Rico will see hurricane force winds in the coming days. Once the National Hurricane Center upgrades Maria’s hurricane status, it’s likely that these wind speed probabilities will increase.

Rain is expected to move into the area on Tuesday, with heavy downpours beginning on Wednesday. The storm will continue to impact the area on Thursday, before moving on to the Dominican Republic. Although Maria will be over land for a couple of days, her intensity is not expected to slow any. She will remain a Category 3 storm when she reaches Hispaniola.

According to The Weather Channel, about a foot of rain is expected in Puerto Rico through Thursday. Those rainfall totals could be increased depending on Maria’s direct path.

“Heavy rain will also be a threat and could contribute to flooding and mudslides. Parts of Puerto Rico and the Virgin Islands may see 6 to 12 inches of rain with locally up to 20 inches in some areas through midweek…Residents and visitors in Puerto Rico and the Virgin Islands should be making preparations right now for a potential hurricane strike,” reports The Weather Channel. 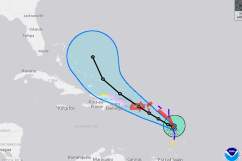