While you can certainly enjoy ice cream without a cone, it isn’t as fun. Cones make ice cream a portable, utensil-free treat. You just have to hope that top scoop doesn’t fall over or melt before you finish it.

Here’s Anna Kournikova enjoying an ice cream cone while watching a match at the 1999 Australian Open.

Like many of the arbitrary food days we celebrate online, National Ice Cream Cone Day has no specific origin, National Day Calendar notes. In fact, many will wonder why on earth we need it when there’s so many other ice cream-related holidays. 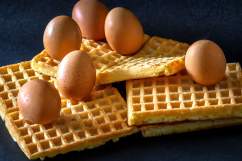 2. The History of the Ice Cream Cone Begins in the 1800s in Europe, First Using Waffles

GettySharing an ice cream cone is an option.

The ice cream cone as we know it today was born in the early 1800s. In 1825, Julien Archambault wrote about creating cones in a French cookbook using “little waffles.”

In 1888, Agnes B. Marshall’s Mrs A. B. Marshall’s Cookery Book featured a recipe for “Cornet with Cream.” “The cornets were made with almonds and baked in the oven, not pressed between irons,” What’s Cooking America notes.

In 1894, “Rolled Waffle-Cornets” appeared in the famous The Epicurean: A complete treatise of analytical and practical studies on the Culinary Art by Delmonico’s chef Charles Ranhofer. That book is considered so important to modern cooking that it’s still being printed. 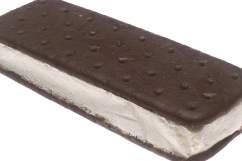 3. The Pre-Filled Ice Cream Drumsticks Were Invented in 1928 by “Stubby” Parker of Texas

GettyRemember that time Mark Cuban worked at a Dairy Queen for a day in 2002?

While Americans didn’t invent the ice cream cone, we did come up with the pre-filled, pre-packaged ice cream cone dessert. As Anne Cooper Funderburg writes in Chocolate, Strawberry and Vanilla: A History of American Ice Cream, J.T. “Stubby” Parker came up with the idea of a pre-filled ice cream cone treat that grocers could sell in their freezers in 1928. In 1931, he started The Drumstick Company to sell the product. It remained an independent business until Nestle bought it in 1991.

The JT “Stubby” Endowed Chair in Dairy Foods at The Ohio State University is named after him. That’s because his son, the late Thomas L. Parker, was a big supporter of Ohio State.

Drumsticks are still sold in American grocery stores and there are over 30 flavors available. 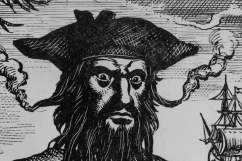 International Talk Like a Pirate Day 2017: 5 Fast Facts You Need to Know

GettyBetter eat that ice cream before it melts!

In late August 2017, Selfridge’s in London gained international attention for selling an ice cream cone for £99, or about $134. According to Business Insider, which tried the dessert, it weighs 350 grams. You also get a 24-carat gold leaf.

In 2015, the Scoopi Cafe in Dubai gained attention for selling “Black Diamond” ice cream at $817 per scoop. It includes edible 23-carat gold flakes – but no cone. 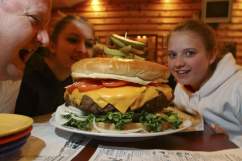 5. Dairy Queen’s 2017 Free Cone Day Was Back in March, but You Can Still Join the Blizzard Fan Club for Promotions

Sadly, Dairy Queen is not offering free ice cream cones on National Ice Cream Cone Day. That’s because the chain already had its popular DQ Free Cone Day 2017 back on March 20. To celebrate the first day of spring, Dairy Queen gave away one free small vanilla cone to customers.

However, Dairy Queen does still regularly offer deals throughout the year. You can join their Blizzard Fan Club for frequent coupons. You even get six buy-one-get-one free coupons for Blizzard treats. And if you go to a Dairy Queen between 2 and 5 p.m. Mondays through Fridays, you can get an Ultimate Frappe OREO Cookie for $2.

If you search “National Ice Cream Cone Day on Facebook, you can find local deals, even at some Dairy Queens. For example, a DQ in The Woodlands, Texas is selling Small Cones for 99 cents all day.

If you live in Honolulu, where you can eat ice cream outside year round, you can visit Magnolia Ice Cream & Treats, Kalihi for a free Keiki schoop in a cake cone if you are a member of their rewards program. 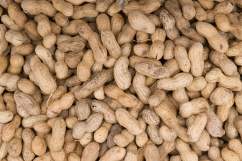 Read More
5 Fast Facts, Food, Holidays
Today is the first day of Fall, but it's also National Ice Cream Cone Day. It's the perfect day to celebrate the frozen treat. Here's a look at the holiday.