Getty U.S. film producer Harvey Weinstein poses during a photocall as he arrives to attend the De Grisogono Party on the sidelines of the 70th Cannes Film Festival, at the Cap-Eden-Roc hotel in Antibes, near Cannes, southeastern France.

A new trend of people typing “me too” as their Facebook has taken social media by storm. What does it mean and how did it start? The trend appears to have been started by actress Alyssa Milano, who wrote earlier this evening:

If you’ve been sexually harassed or assaulted write ‘me too’ as a reply to this tweet. pic.twitter.com/k2oeCiUf9n

Influencers, journalists, and other celebrities quickly got on board, writing:

ME TOO. If every woman who's been sexually assaulted responded #MeToo here people might understand the magnitude of the issue..

So true. There's so much shame around sexual assault/abuse/harassment.What we share publicly is just a sliver #metoo https://t.co/WkArgODGhv

Me too. I don’t know if means anything coming from a gay man but it’s happened. Multiple times.

Soon after, the hashtag #metoo began to trend on Twitter and made its way to Facebook, where it retained the same meaning.

Earlier this month, a New York Times article surfaced about Weinstein, founder of Miramax. In it, A-list celebrities like Ashley Judd, Gwyneth Paltrow, Angelina Jolie, and others say Weinstein harassed them. According to the article, Judd said that she was beckoned to Weinstein’s hotel room at the Peninsula Beverly Hills where Weinstein tried to sexually assault her.

Soon after, the “open secret” broke and subtle, inside jokes of Hollywood suddenly took on a new meaning.

One video surfaced showing actress Gwyneth Paltrow talking about her relationship with Weinstein on David Letterman on November 25, 1998. In the interview, Paltrow tells Letterman about Weinstein, “Oh, he’ll coerce you to do a thing or two, haha.”

The topic about coercion comes up with Letterman jokingly alleging that Weinstein was a “mob guy” who was doing so well in the movies because of “coercion.”

Paltrow’s answer takes on a whole new meaning given the latest revelations.

Other footage shows Seth MacFarlane, the creator of Family Guy, calling out Weinstein in 2013, at an Oscars nominee reveal with Emma Stone.

The other was a subtle joke made on 30 Rock by Jenna Maroney, played by Jane Krakowski.

The Paltrow video comes after she revealed that Weinstein came onto her when she was a burgeoning, 22-year-old actress during a meeting about Weinstein’s Emma at his suite at the Peninsula Beverly Hills, reports The New York Times.

Paltrow was told to keep quiet. 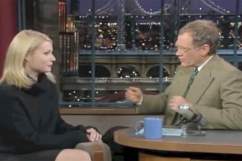 Loading more stories
wpDiscuz
0
0
Would love your thoughts, please comment.x
()
x
| Reply
A new trend of people typing "me too" as their Facebook has taken social media by storm. What does it mean and how did it start?