Law enforcement officials were searching for a suspect with a gun in Floresville, Texas, just a few miles south of where Devin Patrick Kelley shot and killed 26 people at a church in Sutherland Springs on Sunday. Police later gave an “all clear” and said there was no imminent danger to the public.

Vice President Mike Pence is attending a prayer vigil at Floresville High School on Wednesday night for the victims of Sunday’s mass shooting.

Wilson County Sheriff Joe Tackitt initially told CBS Austin that they were unsure if it was an active shooter situation after getting reports of shots fired near a nursing home.

BREAKING: Authorities responding to reports of shots fired in Floresville, near site of vigil VP Mike Pence is attending https://t.co/XhRQ09Kqbp

KSAT News in San Antonio later reported that an “all-clear” had been issued and two witnesses are being questioned.

The all-clear has been given in Floresville after reports of a gunman firing shots near a nursing home. Two witnesses are being interviewed.

NBC News in Dallas-Fort Worth said Floresville High School was on lockdown while police and Secret Service searched the area.

@NBCDFW BreakingNews
Floresville police informed us of a situation near the Floresville High school. Secret service had the Stadium & media pen on lock down for a short period of time. pic.twitter.com/9OVVB9QEIw

People arriving at the #Floresville High School where a vigil remember the #SutherlandSprings victims, @VP is expected @NBCNews pic.twitter.com/NaIPy5uepF

The vice president arrived at the high school just after 5 p.m. local time. He is scheduled to deliver remarks at during the vigil.

Wilson County News reported on its Facebook page that one suspect was in custody and another is still at large, but later reported that “the initial call about a suspicious person, possibly armed, has proven false, according to [Floresville] police Chief Lorenzo Herrera. There were no shots fired, and the situation has been resolved.”

Floresville is the county seat for Wilson County. It’s located east of San Antonio and less than 15 miles south of Sutherland Springs. According to the 2010 Census, its population was just under 6,500 people. The shooting was reported at Floresville Nursing Home and Pecan Park on Hospital Boulevard.

Security was tight for the prayer vigil. Wilson County News reports that people could begin arriving at the vigil at 5 p.m. local time and would have to pass through a metal detector. Texas Governor Greg Abbott and Texas Senator Ted Cruz are expected to attend the prayer service along with Vice President Mike Pence.

.@VP talks about #SutherlandSpringsshooting heroes & #FirstBaptistChurch pastor. “Texas heroes, who I know, don’t consider themselves heroes, who we had the privilege of meeting on this street where they confronted and fired on and chased down (shooter).” pic.twitter.com/j66OswcXHO

On Sunday, Devin Patrick Kelley entered the First Baptist Church in Sutherland Springs and began shooting. He killed 26 people, including many children. Kelley was given a bad discharge from the Air Force in 2014 after being convicted of beating his wife and his stepson.

Vice President Mike Pence and Second Lady Karen Pence were in Texas to visit victims of the shooting who are recovering at Brooke Army Medical Center in San Antonio. During his visit for Floresville, Pence made brief remarks.

“President Trump asked us to be here to say to the members of the First Baptist Church and to Sutherland Springs, we are with you. The American people are with you. And as the President said on Sunday, halfway across the world, ‘We will never leave your side’,” Pence said.

“The Bible tells us that ‘The Lord is close to the brokenhearted,’ and that will be our prayer for you and for this whole community,” he said. “Three days ago, evil descended on this small town and on this small church. We gather today to grieve with those who grieve, but also we gather in the resolve that this evil must come to an end in our land.”

“Standing in this place is very humbling to me. Every American has been inspired by the heroes of Sutherland Springs — the first responders, law enforcement, the medical professionals, many of whom we met today whose swift professionalism saved lives, and the two Texas heroes, who I know don’t consider themselves heroes, who we had the privilege to meet on this street where they confronted, fired on, and chased down the assailant. These two brave men undoubtedly saved lives,” Pence said. 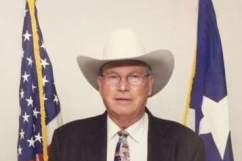 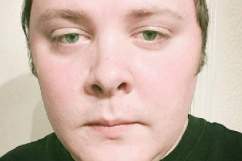 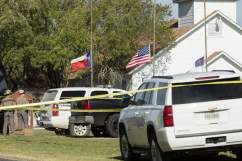 Loading more stories
wpDiscuz
0
0
Would love your thoughts, please comment.x
()
x
| Reply
Police were searching for a suspect with a gun in Floresville, Texas, just north of where 26 people were killed at a church in Sutherland Springs on Sunday. Here's what you need to know.