Getty Director of the Consumer Financial Protection Bureau Richard Cordray testifies during a hearing before the Senate Banking, Housing and Urban Affairs Committee April 7, 2016 on Capitol Hill in Washington, DC.

Richard Cordray, director of Consumer Financial Protection Bureau, has announced his imminent retirement a year before the end of his term; many expect him to seek the Democratic nomination for Ohio governor in 2018.

The Consumer Financial Protection Bureau was created in 2010 in the wake of the financial crisis that rocked the world economy in 2008. The CFPB was part of a package of economic reforms called the Dodd-Frank Wall Street Reform and Consumer Protection Act.

Senator Elizabeth Warren, who helped usher in the legislation, reportedly wanted the job, but knew the Republican-majority Senate would never confirm her, according to Politico. Instead, President Obama tapped Richard Cordray for the post in July 2011; two years later, he was confirmed by the U.S. Senate to a five-year term.

In November 2017, he announced that he would step down from office within the month, nearly a year before the end of his appointed term.

Here’s what you need to know about Richard Cordray:

1. He resigned a year before the end of his term, fueling speculation that he will run for governor of Ohio in 2018

GettyDirector of the Consumer Financial Protection Bureau, Richard Cordray, delivers remarks during a public meeting of the Financial Literacy and Education Commission at the United States Treasury on June 29, 2016 in Washington, DC.

Cordray has a long history in the Ohio state government: He has previously served a term in the state legislature, a term as state treasurer, and another as Ohio’s attorney general. He also served a two-year appointed term as Ohio’s first solicitor general, a position that reports to the attorney general.

Sources familiar with Ohio politics have indicated for months that they expected the former CFPB chief to throw his hat in the ring for the 2018 gubernatorial race. Since his term does not end until July 2018, his early departure could indicate that he does intend to at least explore the option.

“[S]everal prominent Democrats have told me this morning they expect Cordray to run for governor,” said Cleveland Democrat and former U.S. Rep. Dennis Eckhart. “Cordray has a very compelling story and is motivated by convictions that will resonate well in Ohio and especially for those voters in Ohio who believe they have been left behind, ripped off, or ignored.”

Cordray himself has remained silent on the issue, making no mention of it in his exit remarks, which largely focused on his successes at the bureau and what he hopes it will achieve in the future:

As I have said many times, but feel just as much today as I ever have, it has been a joy of my life to have the opportunity to serve our country as the first director of the Consumer Bureau by working alongside all of you here. Together we have made a real and lasting difference that has improved people’s lives, notably: $12 billion in relief recovered for nearly 30 million consumers; stronger safeguards against irresponsible mortgage practices that caused the financial crisis and hurt millions of Americans; giving people a voice by handling over 1.3 million complaints that led to problems getting fixed for vast numbers of individuals, and creating new ways to bring financial education to the public so that people can take more control over their economic lives. None of this could have happened without all of us being dedicated to pull together in supporting and protecting people and making every consumer count. I will always be immensely proud of you and what you have done.

At the same time, there is always more work that lies ahead. That would be true at any point, of course, and one thing I have tried to reinforce this year is that the Consumer Bureau is far more than its director. I am confident that you will continue to move forward, nurture this institution we have built together, and maintain its essential value to the American public. And I trust that new leadership will see that value also and work to preserve it – perhaps in different ways than before, but desiring, as I have done, to serve in ways that benefit and strengthen our economy and our country.

The filing deadline in Ohio is February 1.

2. The CFPB is not popular with Republicans, & Trump reportedly considering firing Cordray just weeks before he resigned

GettyUS President Barack Obama (L) arrives to nominate former Ohio Attorney General Richard Cordray (R) to lead a consumer protection bureau, a central feature of a law overhauling the rules that govern the financial sector during an event in the Rose Garden of the White House in Washington, DC, July 18, 2011.

Since his appointment, Cordray has not been a popular figure among Washington Republicans. But that may have more to do with their distaste for the agency he runs rather than Cordray himself.

“Even as Trump’s push to roll back rules swept through Washington this year, Cordray continued to be a thorn in the industry’s side,” wrote BloombergPolitics upon the announcement of Cordray’s resignation. “In July, he approved a rule that makes it easier for consumers to sue their banks by restricting lenders from settling disputes tied t credit cards and other products through forced arbitration. In October, he announced the completion of a top CFPB priority: a rule aimed at cracking down on payday lenders.”

In April 2017, The Wall Street Journal wrote that Trump’s failure to remove Cordray from his position was the “greatest mystery in Washington” given that Cordray’s work is directly antithetical to Trump’s financial agenda.

Since its inception, Republicans in Congress have long thought that the bureau has too much power over businesses, and a Washington appellate court ruled in October 2016 that the agency was unconstitutionally structured due the autonomous power of its director.

“We are long overdue for new leadership at the CFPB, a rogue agency that has done more the hurt consumers than help them,” said GOP Rep. Jeb Hensarling, chairman of the House Financial Services Committee. “The extreme overregulation it imposes on our economy leads to higher costs and less access to financial products and services.”

On November 3, CNBC reported that Trump held an Oval Office meeting in which he discussed the ramifications of firing Cordray. According to sources, Trump and the officials in the room reached a consensus that such an action would make Cordray into a “martyr,” and opted to let him continue in his post.

3. His tenure was marked by the investigation of Wells Fargo for fake bank accounts, overseeing $11.8 billion in relief for consumers after the recession, and toughening rules for payday lenders

During his tenure at the Consumer Financial Protections Bureau, Cordray both earned the respect of politicians who supported the Dodd-Frank reforms and drew ire from those who opposed them.

Upon the announcement of his resignation, Senator Elizabeth Warren said, “At the CFPB, Rich Cordray forced the biggest financial institutions to return $12 billion directly to the people they cheated. He held big banks accountable.  He is a dedicated public servant and a tireless watchdog for American consumers – and he will be missed.”

Among Cordray’s most lauded achievements at the CFBP are the $11.8 billion in financial relief that went to consumers following the recession, going after Wells Fargo in 2016 for encouraging employees to open fake bank accounts to artificially increase sales figures (which resulted in a $100 million fine for the bank), and creating and enforcing tough new rules for payday lenders earlier this year.

Cordray is quite the trivia buff, gaining a reputation in high school for his mastery of a local quiz show for high schools called In the Know.

In 1987, he was a contestant on the famous quiz show, Jeopardy!, where finished as a five-time undefeated champion and won $45,303 in prize money.

In 2014, he returned to the show as part of it’s Battle of the Decades competition, competing alongside 13 other contestants who were also Jeopardy! champions during the 1980s. He was eliminated during the first round, and declined to collect the prize money due to his position at the CFPB.

“The real bonus was that, though she would probably deny it, I think being a Jeopardy champion helped persuade my wife to marry me,” Cordray said in his official Jeopardy! biography.

5. A native of Ohio, Cordray entered politics as a young man shortly after graduating from law school

Richard Cordray (L) nominee for director of the Consumer Financial Protection Bureau, and Mary Jo White, nominee for chair of the U.S. Securities and Exchange Commission, are sworn in before testifying at a confirmation hearing before the Senate Committee on Banking, Housing and Urban Affairs on March 12, 2013 in Washington, DC.

Born in Columbus, Ohio, in 1959, Cordray grew up in Grove City. He studied legal and political theory at Michigan State University on a full academic scholarship and interned for U.S. Senator John Glenn in Washington D.C. during his junior year. He also holds a masters degree in philosophy, politics and economics from Oxford University.

Cordray earned a juris doctor from The University of Chicago School of Law in 1986, where he was editor-in-chief of the law review. After graduating, he began working as a law clerk for U.S. Supreme Court Justices Byron White and Anthony Kennedy. In 1989, he entered private practice, and the following year, launched his first campaign for public office, unseating six-term Republican Ohio state Rep. Don Gilmore by a 22-point margin.

He and his wife, Peggy, have two children children: twins, Danny and Holly, born in 1998. 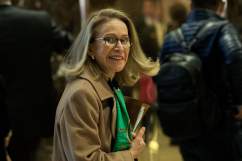 Loading more stories
wpDiscuz
0
0
Would love your thoughts, please comment.x
()
x
| Reply
Richard Cordray, director of the Consumer Financial Protection Bureau, has announced his imminent retirement a year before the end of his term; many expect him to seek the Democratic nomination for Ohio governor in 2018. Here's what you need to know.