Kim Jong-un is not dead, but several people have been posting about his “death” on social media. Not long after it was reported that K-Pop star Kim Jong-Hyun had died following an apparent suicide, social media started lighting up with posts that North Korea’s leader had passed away, people apparently confusing the two names.

“For a moment I thought it was Kim Jong-Un who [had] died,” wrote one Twitter user.

“I misread this as Kim Jong-un,” tweeted another.

“You guys spelt it wrong, it’s Kim Jong-Un (sic),” wrote a third, apparently attempting to correct BBC News’ report on the deceased singer. And the tweets didn’t stop there. Plenty of people were guilty of mixing up the two names when the news was first reported earlier this morning.

According to E! News, the singer, Kim Jong-Hyun, died on Monday. His unconscious body was discovered in an apartment in Seoul. He was rushed to a nearby hospital where he was pronounced dead. Early reports suggest that Jong-Hyun committed suicide, but this has not yet been confirmed.

Jong-Hyun is also known as Jonghyun. He was one of five members of SHINee, a popular K-pop group, which he joined in 2008. About seven years later, Jong-Hyun decided to go solo and released a couple of tracks including “Déjà-Boo” and “Crazy (Guilty Pleasure).” His thousands of fans are mourning the loss today.

Below is a photo of Kim Jong-Hyun.
https://www.instagram.com/p/BcaH2xUlnL5/

Interestingly, there has been some chatter about Kim Jong-un’s whereabouts lately, and some people have been wondering if he is still alive. According to the Daily Star, there was a bit of curiosity surrounding the well-being of Kim Jong-un when he wasn’t on the guest list for the memorial service held in honor of his late father, Kim Jong-il. The site goes on to report that Kim Jong-un ended up visiting the mausoleum where his father’s body is laid to rest, in lieu of attending the memorial.

“It appears that the rotund ruler chose to visit a mausoleum in capital Pyongyang, to mark the sixth-year anniversary of his dad’s death. The bodies of his dad and grandad, Kim Il-sung, the founder of modern day North Korea, are laid in the mausoleum,” reported the Daily Star.

And this isn’t the first time that people wondered if Kim Jong-un was dead. Over the summer, there were at least two instances in which people were led to believe that Kim Jong-un had died thanks to a couple of bogus reports. According to Pundit Fact, a headline on July 28 claimed that Kim Jong-un was killed in a “black op attack” arranged by President Trump.

Back in 2012, there were unconfirmed reports that he had been assassinated. It didn’t take long for social media to light up with posts about Kim Jong-un’s rumored passing. However, it was soon confirmed that he had not been killed.

Rumers flying around the #KimJungUn was assassinated in china today

Rumours that Kim Jung-un has been assassinated. Can't find a single credible source though :/ 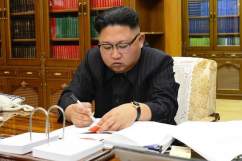