Getty What is Devin Nunes' net worth?

Devin Nunes (R-Calif.) is heading the House Intelligence Committee and releasing a memo that questions the motives behind alleged FISA surveillance of President Donald Trump. Nunes actually comes from a humble farming background and is among the least wealthy people in Congress. He’s definitely not a millionaire like many of the other people that he serves with. Here’s everything you need to know about Nunes’ net worth.

According to OpenSecrets, Nunes’ net worth in 2016 and 2015 was estimated at $158,001. The sectors he’s mostly invested in are financial/real estate (wineries), business, and agribusiness.

2. Nunes’ Biggest Assets Are Wineries, But the Rumored Russian Connection Appears To Be a Stretch

According to OpenSecrets and other sources, Nunes’ biggest assets are wineries. In 2016, the Alpha Omega Winery was worth $75,000 and Phase 2 Cellars was worth $75,000 (these are the midway estimates for the range he provided in his 2016 annual report.) He’s a limited partner in both. In 2016, he also had a Bank of America savings account worth $1,000 to $15,000, and copyright royalties from WND Books, Inc. His annual report also indicated that in 2016 he didn’t purchase any shares of an IPO, had no qualified blind trusts, and had not excluded any assets from the report. His assets didn’t significantly change in 2015 or 2014.

Some publications have reported that Alpha Omega Winery has ties to Russia, but this doesn’t appear to be a strong claim. Daily Kos, an openly liberal publication, reported that Alpha Omega Winery has distributors all over the U.S. and a few abroad, including Luding Trading Company located in Russia.  The report originated from a publication called Addicting Info, where commenters responded that the connection really didn’t seem that strong. One person commented: “Really, an overblown headline. He’s an ag guy (degrees in agriculture) from California, so wineries seem a good fit. And the winery uses distributors around the world, and the biggest one in Russia is the one they use. And the Russian distributors gave Putin some wine on his birthday. I can’t find the bombshell. Nunes actually has been warning about Russia for years. Nonetheless, he seems kind of simple guy, probably in over his head.”

Nunes has never ranked high when his net worth is compared to other people in Congress. OpenSecrets estimated he was the 366th wealthiest person in the House in 2016. And in 2014, the LA Times said he was the 383rd wealthiest member of Congress. (Note: the 2016 Open Secrets page currently lists him as the 166th wealthiest, but he had the same estimated net worth in 2015 when he was listed as the 366th wealthiest in the House by Open Secrets. Open Secrets has been having some technical difficulties as of the time of publication, and every other source lists his wealth ranking in the 300s for the House.)

Devins’ salary in the House is $174,000 a year, according to Ballotpedia. Interestingly, Ballotpedia estimated his net worth from 2012 as being higher than other sources — $183,000. However, most net worths that put his worth that high typically are taking the higher end of an estimated range. It’s also interesting to note that according to even this higher estimate, his net worth was far less than the average net worth of Republican representatives in Congress in 2012, which was $7.6 million.

Devins’ wife, Elizabeth, is an elementary school teacher, so her salary is likely quite small in comparison.

5. Devins and His Family Live in Tulare, California

Recent records indicate that the couple owns a nearly 3,000-square-foot, three-bedroom home in Tulare, California, valued at around $407,000. Because housing costs are so high in California, this is likely a relatively modest home. Devin and Elizabeth married after Devin started his first term in Congress. Before joining politics, Devin grew up in a humble setting working on his family’s dairy farm. He raised cattle and he and his brother saved money to buy land for a farm. At first, that was all he wanted to do. He and Elizabeth came from a more humble background, and friends referred to him as being just a “normal dad.” 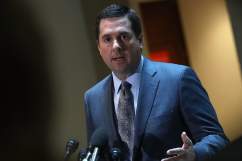 Loading more stories
wpDiscuz
0
0
Would love your thoughts, please comment.x
()
x
| Reply
Find out all about Devin Nunes' net worth, the source of his money, and how he ranks compared to other members of the House.