Crystal Gail Amerson, 29, of Pensacola, Florida, was in for a big surprise after mistakenly believing she was having stomach pains from an order of bad Chinese food.

“Surprise, it’s a boy!,” were not the words Amerson and her fiancé, Brian Westerfield, expected to hear, though in a beautiful twist of fate that is exactly what happened.

The woman, who also has an 18-month old son with Westerfield, gave birth to a bouncing baby boy after calling an ambulance as the pains grew to be unbearable.

Heavy spoke with the father of the surprise bundle of joy, whom they named Oliver.

Here are the details you need to know:

1. She Thought She Ate Bad Chinese Food, & Ended Up Giving Birth to a Beautiful Baby Boy 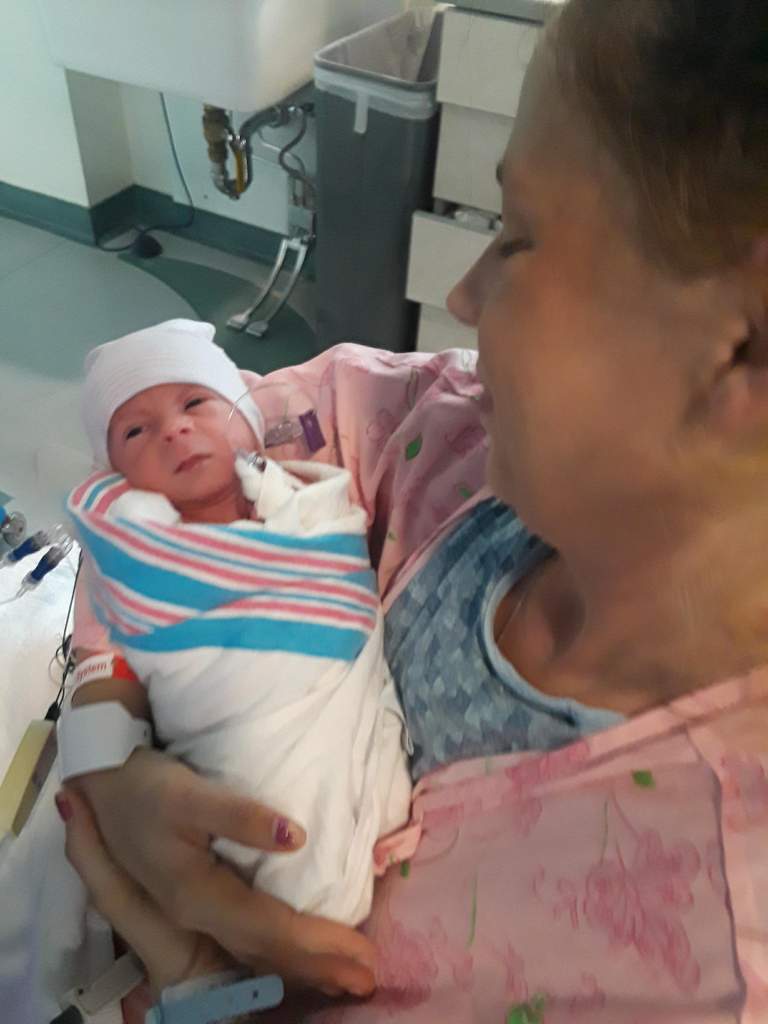 Crystal Amerson is shown with her adorable baby boy, Oliver.

Westerfield told Heavy that his fiancee ate a General Tso chicken meal at a local Chinese restaurant at about 8:30 p.m. Saturday evening.

The woman woke up at approximately 4 a.m., Westerfield said, and once the pains became too much to handle, she asked Westerfield to call an ambulance.

“When the EMT was in our home and said that we may be having a baby, I turned my head so fast I got whiplash…like what do you mean?,” Westerfield told Heavy.

At 6:59 a.m. on March 25, Oliver James was born in the back of an ambulance only a short distance from the couple’s home, weighing in at 5.27 pounds and measuring 18.9 inches.

2. Her Fiancé Said There Were Few Signs, in Retrospect 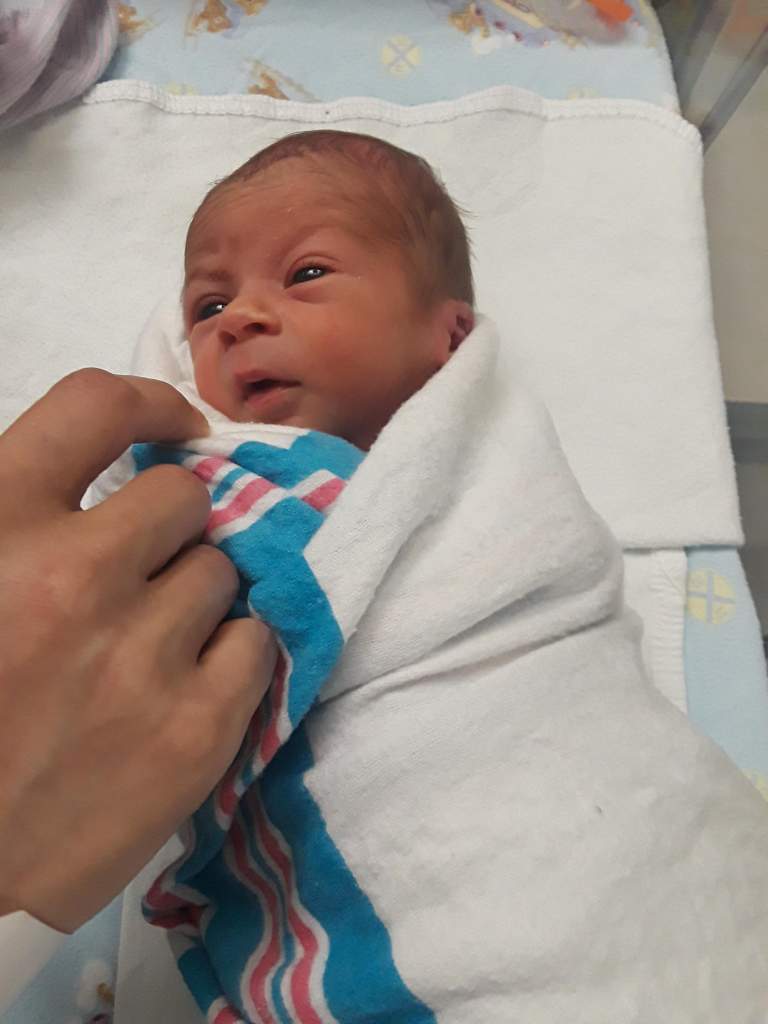 Though Amerson had no idea she was pregnant, in retrospect Westerfield told Heavy that there were a couple of signs. He stated:

She started having a craving for eating crushed ice the last month, which she did with our other son, Wyatt, while pregnant. But with no real signs I guess we just didn’t add it up.

Within the last week, I did feel her stomach felt hard once and I thought to myself, ‘maybe we should take a pregnancy test.’ But then I thought maybe it just stays after the first pregnancy or maybe she’s getting fat and I don’t want to be rude!

Westerfield is a stay-at-home father to 18-month-old Wyatt, and is excited about the surprise addition to the family.

“I’m a stay-at-home, work-from-home dad buying and reselling household goods, yard sales and that type of stuff,” he told Heavy. “I literally just got done the day before rearranging stuff, donating and making more space, de-cluttering…I even moved Wyatt’s crib from out of our bedroom to the living room and dropped it down to a toddler bed.”

Brian Westerfield is shown here with the couple’s son, Wyatt.

In most cases, a woman will have an inkling that she is pregnant when she misses a monthly period. However, Westerfield told Heavy it wasn’t that simple for Amerson.

“I’m not sure she’s had a period since we’ve been together the last few years,” he stated. “It was always irregular and she mentioned that after previous birth control when she stopped taking it that her ‘monthly’ pretty much stopped completely.”

Amerson spoke of a backache on Facebook March 24, only one day before she would give birth.

To which Christina Amerson replied: “Labor much? Guess you get a vacation too!!!”

3. She Had Irregular Periods & Didn’t Gain Much Weight From the Pregnancy

Amerson said she gained only “a little bit of weight,” and her fiance said her periods hadn’t been regular since coming off of birth control.

“I gained a little bit of weight, but I think with my first baby I didn’t notice either,” Amerson told the Pensacola News Journal. “I never gained that pregnancy shape, really. And then I wear scrubs to work because I work at a retirement home for Alzheimer’s and dementia patients. So I guess the way they fit me as well, it was hard to notice anything or tell anything.”

When asked if the couple would like more children, Westerfield told Heavy: “If we do we would like a little more notice!”

When asked how Oliver is doing, Westerfield told Heavy:

He’s healthy and we couldn’t be more happy about that considering she wasn’t doing the typical pregnancy routine. Things like taking it easy, taking her vitamins and eating better…that kind of stuff. He’s eating more which is what the doctors wanted to keep an eye on before releasing him. He hasn’t had any complications.

He definitely has a special birth story that will be fun to tell for years to come.

The now-father-of-two said doctors expect the family will be able to take Oliver home on Friday, March 30, and the couple couldn’t be more grateful or excited to settle in as an unexpected but extremely happy family of four. 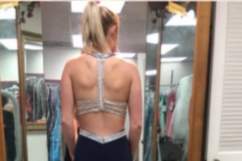 5. A GoFundMe Has Been Set Up to Help the Family With the Very Real & Unexpected Expenses 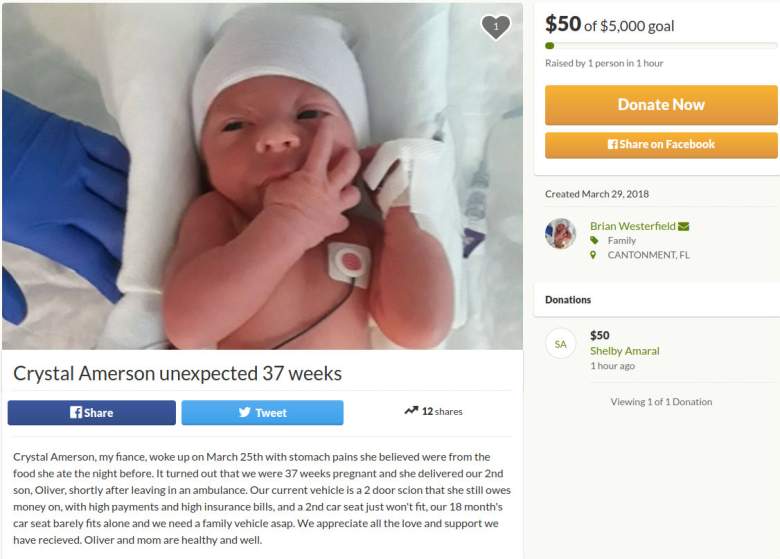 Crystal Amerson, my fiance, woke up on March 25th with stomach pains she believed were from the food she ate the night before. It turned out that we were 37 weeks pregnant and she delivered our 2nd son, Oliver, shortly after leaving in an ambulance. Our current vehicle is a 2 door scion that she still owes money on, with high payments and high insurance bills, and a 2nd car seat just won’t fit, our 18 month’s car seat barely fits alone and we need a family vehicle asap. We appreciate all the love and support we have recieved. Oliver and mom are healthy and well. 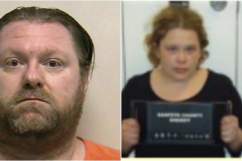 Read More
5 Fast Facts, Breaking News, Editors' Picks, Pregnancy
wpDiscuz
0
0
Would love your thoughts, please comment.x
()
x
| Reply
Crystal Amerson thought she had a bad stomach ache after eating at a local Chinese restaurant. What she didn't expect were the words "It's a boy!" Read on for the exciting details.