The pedestrian bridge that was recently built at Florida International University, in Miami, collapsed on Thursday, March 15. People in the area, including students, have been posting photos and videos of the fallen bridge, located at 109th Ave and 8th Street in West Miami-Dade.

1. The School Announced the Collapse at 2:25 p.m. on March 15 & Released a Follow-up Statement

just drove under the new FIU bridge before it collapsed on the road pic.twitter.com/zmHfB9Z143

At 2:25 p.m. Eastern, the school tweeted that the bridge had collapsed.

The school has since released the following statement.

“We are shocked and saddened about the tragic events unfolding at the FIU-Sweetwater pedestrian bridge. At this time, we are still involved in rescue efforts and gathering information. We are working closely with authorities and first responders on the scene. We will share updates as we have them,” the statement read.

Florida Governor Rick Scott has also released a statement regarding the collapse.

“I have spoken with Miami-Dade County Police Chief Juan Perez about the pedestrian bridge collapse at FIU. I will be in constant communication with law enforcement throughout the day,” he tweeted. He is said to be heading to Miami where he will meet with officials on the scene.

According to authorities, six people have been confirmed dead, but that number could rise as search and rescue efforts continue.

“We have located four deceased,” Miami-Dade Fire Rescue Chief Dave Downey said during a news conference on March 15. The next day, that number was increased to six. Five of the deceased are still trapped in the rubble under the bridge.

“Florida Highway Patrol confirms several people are dead due to the collapse. They also said several cars have been crushed,” the Miami Herald reported earlier in the day.

A total of 10 people were rushed to Kendall Regional Medical Center’s trauma unit for treatment after the accident. Of those 10 victims, eight are expected to be okay, suffering more minor injuries from cuts to broken bones. Two of those victims are still listed in critical condition.

According to the Miami Herald, one of those victims went into cardiac arrest and required emergency surgery. The other victim also required surgery and was being treated by a neurosurgeon.

3. Students Have Been Posting About the Collapse on Social Media

Within minutes of the bridge collapse, witnesses took to social media to share photos and videos of what had happened. In the video below, you can see and hear details of what’s going on in the area.

“A worker was on top of it when it fell,” said one onlooker.

“Workers are hurt. They are helping workers. They are pulling workers out. There’s definitely people stuck under,” said another.

“The street is usually pretty loud because of traffic and other construction but the bridge was louder than usual so I knew something was wrong,” an FIU student told Heavy.com.

4. The Bridge Was Erected on Saturday, March 10

The cable-stayed pedestrian bridge was under construction for several months. It’s purpose was to connect the city of Sweetwater with the northern entrance of Florida International University (FIU). The bridge was suspended over 8th Street. The bridge was built in an effort to help ensure the safety of students and faculty who walked to the school, who have had to cross a busy street to do so.

“The bridge was installed at Southwest 109th Avenue Saturday morning, intended eventually to provide pedestrian access across Tamiami Trail from FIU’s main campus to Sweetwater, where thousands of students live in off-campus housing or in FIU’s newer dorms,” reports the Miami Herald.

The bridge was propped up on “temporary supports, [before being] rotated 90 degrees across an eight-lane thoroughfare, and lowered into its permanent position,” on Saturday, March 10, according to FIU.

FIU Pedestrian BridgeThis $9.3 million project will be an iconic cable-stayed pedestrian bridge, connecting the city of Sweetwater with the northern entrance of Florida International University (FIU) over 8th Street. Read more about this project on the MCM blog: http://bit.ly/MCM-FIU2015-11-18T21:41:16.000Z

The video above shows what the bridge was projected to look like upon completion.

The bridge weighed 950 tons and was 174 feet long. It was built using an “innovative approach,” which was meant to keep traffic flowing and not cause congestion in the area during the construction process.

The $9.3 million project was approved in 2015. At the time, the MCM Civil Department announced that it had joined forces with Tallahassee-based  FIGG Bridge Engineers, a company best-known for designing bridges like Boston’s Leonard P. Zakim Bridge and Florida’s Sunshine Skyway Bridge.

“The FIU-Sweetwater UniversityCity Bridge is the largest pedestrian bridge moved via Self-Propelled Modular Transportation in U.S. history. It is also the first in the world to be constructed entirely of self-cleaning concrete. When exposed to sunlight, the titanium dioxide in the concrete captures pollutants and turns it bright white, reducing maintenance costs,” a post on the school’s website reads.

FIU had been extremely proud of the bridge. In fact, the school’s president, Mark B. Rosenberg, spoke about the achievement a few days ago.

“FIU is about building bridges and student safety. This project accomplishes our mission beautifully. We are filled with pride and satisfaction at seeing this engineering feat come to life and connect our campus to the surrounding community where thousands of our students live,” he added,” Rosenberg said. 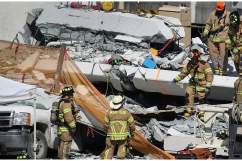