Former President Jimmy Carter will not be attending Billy Graham’s funeral on Friday, March 2. Every living President has received an invitation, but it appears that President Donald Trump is the only one who has accepted. However, many former U.S. Presidents have needed to turn down the invitation for various reasons. Why isn’t Carter attending?

It’s unclear exactly why Carter isn’t attending the funeral. A spokesperson only said that “he regrets he cannot attend.” However, the Charlotte Observer speculated that this might be because Jimmy Carter’s wife, Rosalynn Carter, recently had surgery to remove scar tissue from her small intestine. Rosalynn is 90 and Jimmy Carter is 93. At the time of her surgery, Carter said that he was “deathly afraid.”

“Tirelessly spreading a message of fellowship and hope, he shaped the spiritual lives of tens of millions of people worldwide. Broad-minded, forgiving, and humble in his treatment of others, he exemplified the life of Jesus Christ by constantly reaching out for opportunities to serve. He had an enormous influence on my own spiritual life, and I was pleased to count Reverend Graham among my advisors and friends.”

Although not an evangelist like Graham, Carter is actively involved in Christian ministry and teaching others about his faith, too. Carter has been teaching Sunday School class at Maranatha Baptist in Plains, Georgia for years. He first announced that he was cancer free to his class. On the day he made an announcement about his cancer diagnosis, he went on to teach about what Jesus said on loving your enemies and praying for those who persecuted you, NPR reported. After his cancer diagnosis, Carter actually started teaching even more, MyAJC reported. Just three days after one of his radiation treatments, he taught back-to-back classes at Maranatha. First he taught one Sunday School class at Maranatha, which seats 460 including an overflow room. Then he went to Plains High School a half-mile down the road and taught a second class to 240 people. He and his wife posed for pictures and then went back to Maranatha and posed for more pictures. It was all Carter’s idea.

Some Sundays, even before the sun is up, a long line snakes around the church of people who want to attend Carter’s class, NPR reported. Once the church tried to seat everyone who showed up, but they ended up trying to fit in 900 people, which pushed the legal limits. The staff try to fit in who they can, but often hundreds are left outside. Carter tries to meet with the people who can’t get inside at a schoolhouse later, but sometimes everyone doesn’t fit in there either. The rules that Maranatha had to set up to accommodate so many visitors are detailed on the church’s website. They include opening the doors at 7:30 a.m. to allow more time for seating. Sunday School seating is still on a first-come, first-served basis.

Former Presidents Jimmy Carter, George H.W. Bush, and Bill Clinton all honored Graham in 2007 when his library was dedicated. 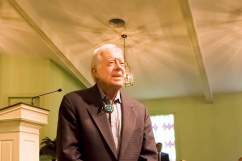