Former First Lady Barbara Bush passed away at the age of 92, leaving behind her husband, five living children, and numerous grandchildren and great grandchildren. The public can pay their respects today in a public viewing. A private funeral will be held on Saturday for only about 1,500 people. Read on for all the details about how to watch Barbara Bush’s lying in repose ceremony online today.

Another live stream is below:

This video below from USA Today is from earlier in the day.

The public viewing for Barbara Bush will be held today, April 20, at St. Martin’s Church in Houston, Texas, from 12 p.m. Central to midnight Central (1 p.m. Eastern-1 a.m. Eastern.) If you want to watch the lying in repose ceremony on live stream, you can watch on C-SPAN online.  The streaming coverage should begin at that page at 12 p.m. Central. If an embeddable link becomes available, we will add it to this story later.

If you are wondering why today’s service for Barbara Bush is called a lying in repose vs. a lying in state or a lying in honor service, here are the details. Lying in repose typically refers to when the casket of someone of high stature, such as a government official, can be publicly viewed in a building other than the Rotunda, so the public can pay their respects. Justice Antonin Scalia lay in repose in the Supreme Court Building, and Nancy Reagan lay in repose for two days at the Ronald Reagan Presidential Library.

Lying in honor is reserved only for private citizens, who are given the honor of having their casket placed in the U.S. Capitol Rotunda for public viewing. Including Billy Graham, only four private citizens have been given this honor.

Lying in state is a rare honor reserved for select elected officials and military officers. They are granted the honor of having their casket placed in the Rotunda of the U.S. Capitol for public viewing. Members of the armed forces guard the casket, each representing one of the branches, and periodically rotate. Customarily, only Presidents, military commanders, and members of Congress lie in state. For Presidents and former Presidents, the honor is automatic.

A private funeral service will be held for Barbara Bush on Saturday in Houston, followed by a procession from Houston to College Station. Barbara Bush will be buried in a private ceremony at the Bush Library at Texas A&M University, next to her daughter Robin.

When Barbara and George’s daughter Robin was only three, in 1953, she was diagnosed with leukemia. The doctors told them that there was no hope for a cure. They first realized something was wrong when Robin became fatigued, listless, and didn’t want to play anymore. They didn’t accept the diagnosis, and took her for blood transfusions and bone marrow tests. But Robin still died, just before she turned four. Barbara Bush said of that moment: “I was combing her hair and holding her hand. I saw that little body, I saw her spirit go.” 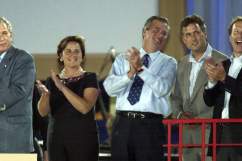 How Many Children Did Barbara Bush & George Bush Have?