Photo provided to Heavy by Brandon TarttThe breasts of Chikesia Clemons were exposed by two cops who arrested her in a Waffle House after protesting that she had to pay 50 cents for cutlery.

A video capturing the arrest of a 25-year-old black female, Chikesia Clemons, inside of a Waffle House on Industrial Parkway in Saraland, Alabama, has gone viral and sparked a national outrage.

Clemons, of Mobile, Alabama, was arrested April 22 after reportedly asking for plastic utensils while placing an order at the Waffle House on Industrial Parkway. Police, however, say the woman was intoxicated and belligerent.

The disturbing footage shows the woman on the ground with her breasts exposed as an officer threatens to break her arm.

Earlier this month, two black men were arrested after waiting for a friend at a Starbucks in Philadelphia, and the incidents have caused an uproar in regards to how people of color are treated in public settings.

Heavy spoke with a friend and stylist of Clemons, who described her as a hard-working, dedicated and loving mother.

1. The Outrageous Incident Took Place After She Was Allegedly Told There Was a Fee for Cutlery, Though Police Tell a Different Story

The cellphone video was captured by Clemons’ friend, Canita Adams, according to AL.com, and the entire incident allegedly took place over cutlery that she was asked to pay for when ordering.

AL.com reported: “Clemons asked for plastic utensils while placing an order at the Waffle House on Industrial Parkway in Saraland early Sunday morning, and was told by a female employee that plasticware costs 50 cents, according to Clemons-Howard.”

After three officers briefly speak with Clemons, who is visibly and understandably shaken, the footage shows police officers pulling the woman off of a chair and pinning her to the floor of the restaurant.

At a news conference on Monday, Saraland police maintained that the three officers involved were only following protocol and contested Clemons’ family’s version of events.

Officials said Clemons and a friend were acting belligerent as they allegedly drunkenly yelled profanities and made threats to employees that they would return with a gun and “shoot this place up.”

In addition, a 911 call was made by an employee at approximately 2:30 a.m., The Washington Post reported. The caller said one of her managers instructed her to call police because two black females and one black male had entered the Waffle House with alcohol, which they were told could not be consumed inside of the restaurant.

Surveillance footage showed Clemons and Adams seated at a table before being joined by an unidentified male after he had used a restroom, according to the news outlet.

2. An Officer Threatened to Break Her Arm in the Video, & Clemons’ Breasts Were Exposed in Front of Other Patrons

“What are you doing?” Clemons asked the officers at one point during the encounter, to which an officer responds, “I’ll break your arm, that’s what I’m about to do.”

As the woman was being wrestled to the ground to be arrested, the video showed Clemons’ top come down, exposing her breasts for anyone dining in the background to see.

The Saraland Police Department is aware of the arrest at Waffle House and the accompanying video on social media. The situation is being thoroughly reviewed and is under active investigation right now. Our department strives for transparency and we encourage our community to be aware of current events.

The woman was arrested at approximately 2:45 a.m. on charges of resisting arrest and disorderly conduct.

While it was alleged that Clemons was belligerent and possibly intoxicated, many are still coming to the woman’s defense because of the way police handled the situation.

The white feminists who praised Barbara Bush so loudly are now being extremely quiet about #ChikesiaClemons being sexually assaulted by racist cops.
Black women deserve more respect than white women of the elite class.

“The white feminists who praised Barbara Bush so loudly are now being extremely quiet about #ChikesiaClemons being sexually assaulted by racist cops,” @cmmcmmcmmcmm tweeted. “Black women deserve more respect than white women of the elite class.”

PURPOSEFULLY half disrobed, PURPOSEFULLY sexualized and manhandled, yet where is the worldwide press on this. #Infuriating #ChikesiaClemons #WaffleHouse

“PURPOSEFULLY half disrobed, PURPOSEFULLY sexualized and manhandled, yet where is the worldwide press on this,” wrote @TheRealSueAnn. “Regardless of what she did or didn’t do, no woman deserves that kind of treatment. Ever. #Infuriating #ChikesiaClemons #WaffleHouse”

3. She Was Described as a Hard-Working, Classy Mother

Officers would not tell #ChikesiaClemons why she was being arrested or what she had done wrong.

They literally put her hands around her neck, and told her to stop resisting, which she never did.@wafflehouse, what’s the word?

Clemons was described by her friend and stylist as a hardworking and “wonderful, classy woman who loves being a mother.”

“She never deserved that treatment. It is disgusting,” Brandon Tartt told Heavy. “If you aren’t going to get utensils with your food, then how are you going to eat? It’s common knowledge that everyone gets utensils to use with their food at the Waffle House or any other restaurant, and it shouldn’t matter who you are or what you look like.”

She’s a good, quiet girl. By all means Chikesia is classy, very classy at that. She is a hardworking mother. People need to understand, if this was your child, how would you feel? I could see if she was fighting or anything else, but she did absolutely nothing wrong. She is innocent.

She has a wonderful mother, that woman raised her to be a respectful woman and a lady. Chikesia came from a good home and a great church-going family. Her mother has always been by her side, by all of her children’s sides. She is her number one supporter in this matter.

She graduated from school and she works very hard as a mother. It is just the type of person that she is.

Tartt added that Clemons is not speaking with media at the advice of her attorney.

4. A Protest Was Held Outside of the Waffle House Location in Support of Clemons

The NAACP has called the arrest troubling, and pickets stood outside the Waffle House location with signs.

Tackled, harmed and exposed all because of the color of her skin! #ChikesiaClemons deserves fair treatment just as well as anyone else and should be able to dine without being racially profiled. When will it stop?

“Tackled, harmed and exposed all because of the color of her skin!,” @NAACP tweeted. “#ChikesiaClemons deserves fair treatment just as well as anyone else and should be able to dine without being racially profiled. When will it stop?”

A tale of 2 Waffle Houses:

In Alabama, a black woman, Chikesia Clemons, was brutally arrested for complaining about being charged for a plastic spoon.

Clemons’ arrest happened only weeks after two black men were asked to leave a Philadelphia Starbucks as they said they were waiting for a friend, which was also caught on video and caused national outrage. You can watch the footage by clicking here.

The arrest of Clemons occurred on the same day as a shooting which killed four people of color at a Waffle House in Nashville, Tennessee.

In addition, a golf club in Pennsylvania is under fire after calling police on a group of black women after a co-owner of the club and his father claimed the group was playing too slowly while refusing requests to leave the premises. 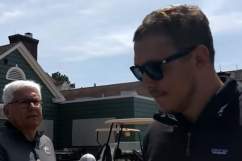 The five black women who set out to play golf feel they were discriminated against, and said it was a “horrific experience.” You can read more about the story by clicking here.

The incidents have caused many to express outrage regarding how people of color are treated in public settings:

A tale of 2 Waffle Houses:

In Alabama, a black woman, Chikesia Clemons, was brutally arrested for complaining about being charged for a plastic spoon.

I actually can’t personally repost the video of #ChikesiaClemons because I’m so triggered. @WaffleHouse employees called the police on her in Alabama. I watched the video. She was peaceful, then wrestled to the ground by THREE officers, choked, half-disrobed and arrested.

And I’m literally, physically ill over what I just saw. #ChikesiaClemons is another black person treated like a threat when she was simply a patron.

Read on for further coverage of the Philadelphia Starbucks incident:

Loading more stories
wpDiscuz
0
0
Would love your thoughts, please comment.x
()
x
| Reply
A video showing Chikesia Clemons being arrested, her breasts exposed as she laid on the ground, and an officer threatening to break her arm, has gone viral. Heavy spoke with a close friend of Clemons.