Art Bell has passed away at the age of 72. During his life, Art was married four times: to Sachiko Toguchi Bell Pontius, then to Vicki L. Baker, then Ramona Lee Hayes, and finally to Airyn Ruiz. Art and RamonaLee Hayes-Bell were described as inseparable, but her unexpected death sparked a number of conspiracy theories about the man who was known for his own interest in conspiracy theories, UFOs, and paranormal activity. Here’s what you need to know about Ramona Bell.

1. Art and Ramona Met at a Radio Station & She Was 15 Years Younger Than Him

Art and Ramona were married from August 4, 1991 to January 5, 2006. She was 15 years younger than him. They met while they were co-workers at the radio station KWDN in Las Vegas, WorkBench reported. Ramona helped Art with his business, booking guests and handling other administrative duties. They also owned an oldies radio station.

Whitley Strieber’s website described them this way: “As any regular listener knows, Art and his wife are/were very close. They’re never apart and pretty much do everything together. The way they love and support each other has always been inspiring to me and made me feel kind of hopeful. I want to be loved like that. I smiled when she came on the air on New Year’s Eve with champagne and good wishes at midnight.”

2. They Saw a UFO Together Near Las Vegas

The book “Conspiracies and Secret Societies: The Complete Dossier,” by Brad and Sherry Steiger, recounts one of the couple’s adventures together in the more “paranormal” realm. One night, the two had a UFO sighting while they were returning from his job at radio station KBWN in Las Vegas. They said an object hovered over their car, shaped like a giant triangle. It was 150 feet long and had two bright lights at each of its three points. They said the UFO was silent and barely moved, only floating above them.

She died unexpectedly in 2006 at the age of 47 in Laughlin, Nevada, while they were on vacation. Her obituary and other official reports said that she died of circulatory failure resulting from an asthma attack, apparently in her sleep. She had suffered from asthma for years, Coast to Coast wrote, and “took her normal steps to control the attack.” According to Art Bell’s wikia, Ramona still smoked cigarettes, even though she had asthma.  Art described how she died in great detail during a January 22, 2006 Coast to Coast AM episode, talking about how she had been up all night with him, bringing him coffee and keeping him company. He had gone to sleep before she did, and when he woke up he found that she had died. He said that many were not aware of how serious asthma can be. “It absolutely kills people,” he said.

According to Coast to Coast, the couple hadn’t spent a day apart since they were married.

Because of the unexpectedness of her death, a number of conspiracy theories — none of which had merit — developed after she died. Some of his listeners wondered about the cause of her death. Bell’s quick marriage to Airyn Ruiz a few months after Ramona’s death only spurred on some of these theories, but the two did not meet until after her death. In addition, law enforcement never mentioned any evidence of foul play, and autopsy reports all pointed to a natural death resulting from her asthma. Many of his listeners also said that he sounded genuinely upset and grief-stricken when he first talked about her death on Coast to Coast.

Other conspiracy theories wondered if some other type of foul play had befallen her, with listeners talking about all the other people near Art who had died. They talked about Father Martin, who had died of a cerebral hemorrhage after falling in 1999. In 2000, Terence McKenna died of a brain tumor. But once again, there was no evidence of foul play and Ramona’s death was ruled as a natural — but incredibly tragic — result of a severe asthma attack. In fact, Art Bell said that Ramona’s brother had also died of asthma and at a much younger age in his 30s.

Then there were the really creative conspiracy theories. One person wrote on the Physics Forums in 2006 that he thought he was responsible for Ramona’s death because of a comment he made during the radio show four days before she died. They wrote: “But the thing is, the moment I made my wish, however many millions of listeners heard what I said and must have had the same wish at the same time. If you recall, Art himself had done some mass consciousness experiments on the radio, and strange things happened. So he stopped doing such experiments because of the risk that unintended, bad consequences might result. So, what I did was inadvertently cause a mass consciousness experiment–and now look what’s happened!!!” No one on the forum really joined in on the contributor’s theory. In the end, Ramona’s death was an unexpected and heartbreaking tragedy.

During Art’s radio show when he talked about Ramona’s death and the grief he was enduring, he also talked about sometimes feeling like he was losing the will to live. He had to pause the radio show and shut off an alarm, which had sounded because someone in Oregon had called the police, worried that he was going to take his life.

By the end of January, less than a month after Ramona had died, Art began talking about how he was making a “significant life decision.” He said he was going to keep that decision a secret for at least a year, and not tell readers about it until 2007. But he kept talking about this life decision. In March 2007, he talked about taking a huge risk and doing “something rash.” On April 15, 2006, he revealed that he had gone to the Philippines and married Airyn Ruiz Bell. They had started talking by email shortly after Ramona’s death, videoconferenced online for hundreds of hours, and got married a week after they first met in person in the Philippines. By October, Airyn was pregnant. In 2017, they had a second child. 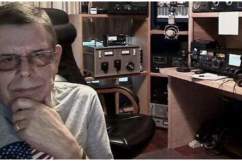 Loading more stories
wpDiscuz
0
0
Would love your thoughts, please comment.x
()
x
| Reply
Art Bell and his wife Ramona were very close until she died at 47. They even saw a UFO together. But her unexpected death sparked many conspiracy theories.