President Donald Trump will not be attending former First Lady Barbara Bush’s funeral today. There has been tension between Trump and the Bush family since the campaign, and some have speculated that this is why he may not be attending today. But there’s another factor in play. It’s actually highly unusual for a sitting President to attend a former First Lady’s funeral. Read on to learn more about Trump’s decision.

The White House announced that Trump would not be attending the funeral “to avoid disruptions due to added security, and out of respect for the Bush Family.” Read below for more details about Trump’s decision.

Trump & the Bushes Have Not Been Getting Along

It’s not clear exactly what Trump meant by “out of respect” for the family, but some have speculated that this has something to do with the tumultuous relationship of late between Trump and the Bushes. Trump ran against Jeb Bush for the Republican Presidential nomination in 2016. At times, he gave Jeb nicknames (as he did for most of the people he was running against) and often described Jeb as low energy. Since then, Jeb has been equally harsh to Trump. When Jeb spoke at a forum at Yale on March 29, he joked that he was “still in therapy” since the campaign, and then said something about having children “who actually love me.” He never mentioned Trump by name, but Trump’s sons later tweeted to Jeb that they loved their father too, CNN reported. Donald Trump Jr. tweeted: “Also love that he (Trump) learned enough about politics in a few weeks to dismantle you piece by piece despite it being your life’s work.”

In late January, Jeb warned that if the 2018 congressional races focused on the Trump’s rhetoric and character, the Republicans might be hurt, USA Today reported. Meanwhile, a book called “The Last Republicans” quoted George Bush Sr. as calling Trump “a blowhard” and Bush Jr. as saying, “This guy doesn’t know what it means to be President,” BBC reported.

Barbara herself called Trump a “showman” during the campaign, and wondered how women could vote for him.

Melania Trump Will Attend the Funeral

In a news conference, Trump said that Barbara Bush was a “wonderful, wonderful person” and “a woman of proud patriotism and profound faith.”

First Lady Melania Trump announced that she would be attending Barbara Bush’s funeral. Her spokeswoman, Stephanie Grisham, said earlier this week: “Mrs. Trump intends to pay her respects to Barbara Bush and the entire family at the funeral on Saturday.”

In a statement, Melania Trump said: “Our hearts are with the Bush family as we celebrate the life and mourn the loss of Barbara Bush,” Mrs. Trump said in a statement. “Throughout her life, she put family and country above all else. Her dedicated service to the American people was matched only by her compassion and love of family. She was a woman of strength and we will always remember her for her most important roles of wife, mother, and First Lady of the United States. My heartfelt condolences and prayers are with the Bush family as we honor her legacy.”

GettyJFK may have been the last sitting President to attend the funeral of a former First Lady.

First Ladies customarily attend the funerals of former First Ladies, but sitting Presidents rarely attend their funerals. Barack Obama did not attend Nancy Reagan’s funeral when he was President, for example, but First Lady Michelle Obama did attend. Instead, Obama spoke at SXSW in Austin. Obama was always lavish in his praise and admiration of Nancy Reagan at the time, saying that she helped ease his and Michelle’s transition into the White House. He said that she “could not have been more gracious and more charming” to himself and Michelle when they first entered the White House in 2009, The Hill reported.

Obama also did not attend First Lady Betty Ford’s funeral in 2011. And George W. Bush did not attend the 2007 memorial services for Lady Bird Johnson.

In fact, according to WUSA9, the last sitting President to attend a First Lady’s funeral was when President John F. Kennedy attended Eleanor Roosevelt’s funeral in 1962. 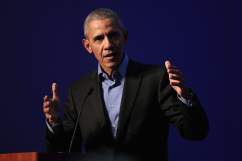 Loading more stories
wpDiscuz
0
0
Would love your thoughts, please comment.x
()
x
| Reply
President Donald Trump will not be attending Barbara Bush's funeral today. Learn why and whether or not this is unusual for a sitting President.