Starbucks has found itself under extreme fire after two stores on opposite ends of the country stand accused of being racist towards black men.

As the company was already scrambling to fix a public relations nightmare caused by the videotaped arrest of two black men in a Philadelphia Starbucks, a new video emerged Monday showing a black man being denied access into a bathroom at a Los Angeles area store on April 14.

What makes the above video so troubling is that it seems a white man had just been allowed into the same restroom that Brandon Ward, a black man, was denied access to.

Ward’s video went viral after being published to Twitter by activist Shaun King, where at the time of publishing it received nearly one million views in less than a day:

Meet Brandon Ward. He was @Starbucks – about to make a purchase – and needed to use the restroom.

They denied him the code.

He then finds a white man, Weston, who came out of the restroom.

He had not made a purchase but they gave HIM the code.

“Here we go again,” @ShaunKing tweeted. “Meet Brandon Ward. He was @Starbucks – about to make a purchase – and needed to use the restroom. They denied him the code. He then finds a white man, Weston, who came out of the restroom. He had not made a purchase but they gave HIM the code. RACISM.”

Ward videotaped himself being denied access to the store’s lavatory, and asked why he was denied access while a white man under the same circumstances had just been let in.

Ward said neither him nor the white man, who identified himself on the video as Weston, had purchased anything prior to asking the store to use the restroom. He politely confronted Weston as the white man exited the bathroom:

WARD: Have you purchased anything here?

WESTON: No, I was just about to go [purchase something].

WARD: But before you made a purchase they let you use the restroom, right?

WESTON: I just asked for the code.

WARD: You just asked for the code and they gave it to you right, before you made a purchase?

“You need to stop recording right now,” an unidentified woman who said she was the store’s manager can be heard telling Ward. “You need to leave right now,” she demands, before a security guard appears.

Ward’s video came just two days after a video of two black men being taken out of a Philadelphia Starbucks in handcuffs went viral:

In that video, at least six Philadelphia police officers are seen taking the two seemingly cooperative men out of the store, located at 18th and Spruce Streets.

In a second video, which was reportedly taken only minutes before the arrests, shows officers speaking to the men before a third man, identified as Andrew Yaffe, emerges, and alleges that the black men were waiting for him.

Starbucks responded to the video saying they’re “reviewing the incident with our partners, law enforcement and customers to determine what took place and led to this unfortunate result.” The company also issued the following statement April 14:

We apologize to the two individuals and our customers and are disappointed this led to an arrest. We take these matters seriously and clearly have more work to do when it comes to how we handle incidents in our stores. We are reviewing our policies and will continue to engage with the community and the police department to try to ensure these types of situations never happen in any of our stores.

By now, you may be aware of a disheartening situation in one of our Philadelphia-area stores this past Thursday, that led to a reprehensible outcome.

First, to once again express our deepest apologies to the two men who were arrested with a goal of doing whatever we can to make things right. Second, to let you know of our plans to investigate the pertinent facts and make any necessary changes to our practices that would help prevent such an occurrence from ever happening again. And third, to reassure you that Starbucks stands firmly against discrimination or racial profiling.

In the coming days, I will be joining our regional vice president, Camille Hymes — who is on the ground in Philadelphia — to speak with partners, customers and community leaders as well as law enforcement. Most importantly, I hope to meet personally with the two men who were arrested to offer a face-to-face apology.

We have immediately begun a thorough investigation of our practices. In addition to our own review, we will work with outside experts and community leaders to understand and adopt best practices. The video shot by customers is very hard to watch and the actions in it are not representative of our Starbucks Mission and Values. Creating an environment that is both safe and welcoming for everyone is paramount for every store. Regretfully, our practices and training led to a bad outcome — the basis for the call to the Philadelphia Police Department was wrong. Our store manager never intended for these men to be arrested and this should never have escalated as it did.

We also will further train our partners to better know when police assistance is warranted. Additionally, we will host a company-wide meeting next week to share our learnings, discuss some immediate next steps and underscore our long-standing commitment to treating one another with respect and dignity. I know our store managers and partners work hard to exceed our customers’ expectations every day — which makes this very poor reflection on our company all the more painful.

Finally, to our partners who proudly wear the green apron and to customers who come to us for a sense of community every day: You can and should expect more from us. We will learn from this and be better.

The two men from the Philadelphia incident will be meeting with Johnson this week, a Starbucks spokesperson told NBC News. 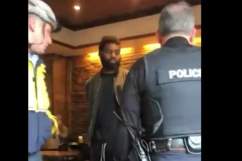 Loading more stories
wpDiscuz
0
0
Would love your thoughts, please comment.x
()
x
| Reply
Starbucks is under fire after stores are being accused of racism. In this video, black man Brandon Ward is denied bathroom access after a white man is allowed in.