When Bill Greene cast an electoral vote for Republican Ron Paul in the 2016 presidential election, he probably never guessed that action would prevent him from serving his local Republican party in the years to come. Greene has volunteered and worked with various Republican parties for more than 30 years, but his act of voting for Ron Paul caused him a lot of trouble in Hidalgo County. Now he’s not allowed to serve as a delegate for the state Republican convention in Texas. Some members even told him that he might secretly be “Antifa.” Heavy is speaking with the Hidalgo County GOP and may have a comment to add to this story soon.

Bill Greene Was Not Allowed To Be a Delegate, Even Though Hidalgo County Didn’t Have Enough Delegates to Fill All Their Seats

In late March, Bill Greene attended the Hidalgo County Senate District 27 Convention, where delegates were picked to go to the upcoming State GOP convention.  When his name was brought up, he was voted out as both a delegate and an alternate because he had cast his electoral vote for Ron Paul. What makes this even more egregious, he told Heavy, is that Hidalgo County didn’t even have enough delegates to fill half of their 35 seats. You can watch a video of the proceedings above. About three minutes into the video, the discussion about Greene begins, but then is sidetracked until about nine minutes in. Then they discuss allowing Bill Greene’s wife, Kelley, as a delegate, and resume discussion about Bill at 27 minutes.

“They tried to vote my wife, Kelley, out too because she’s married to me. In a split vote, she is still a Delegate,” he shared. “This is what my party has come to. Add this to all of our GOP ‘leaders’ votes lately. The future of the GOP is pretty clear. I am sad.”

During the meeting, a motion was made to add Bill Greene and his wife to the list of delegates, since they didn’t have enough delegates to fill all their available seats. One person said that the Greenes were not nominated because “based on past performance of the last election cycle, it was brought to our attention that they were a faithless elector, and may not be deserving of going this year.”

Kelley Greene spoke up about this, saying that she loved her husband dearly, but it was incorrect to lump her in the same bucket as her husband since she was not even an elector. “So what is your reason for refusing me?” she asked. The district officials admitted that there wasn’t a reason not to include her and she was ultimately added as a delegate after a very close vote.

But things went differently when discussing Bill Greene. Greene pointed out that he was very active in the Republican party since college, for 30 to 35 years, which was a requirement for being a delegate.

“My vote as an elector was very clear, that I wasn’t voting against a Republican, I wasn’t voting against a person, I was voting for someone, as my oath of office required me to do…” he said during the meeting. “I voted for a Republican for President of the United States. I didn’t vote for Trump, but that’s because the electors are free agents and our sole responsibility is to vote for who we believe is the best candidate for President of the United States… To say that your 30 to 35 years of active service to the Republican party, your attendance at four national conventions… dozens of state conventions… is irrelevant to what we’re doing here, I think you’re setting a very dangerous precedent….”

The Convention Chair that day, Denny Church, responded that electors needed to vote for the Republican nominee, Donald Trump.

“Bill Greene was out for Bill Greene,” Church said at the meeting. “When it comes to moving forward, we do it as a group. In this case it’s SD 27. Overall, it’s Hidalgo County. Overall, it’s the state of Texas. The state of Texas voted overwhelmingly for Donald Trump, he got it, boom, guess what? ‘Well, I’m going to vote for Ron Paul. Look at me….’ This was not anything … to help the party… We’ve got to earn things in life, that’s the rules. Beyond that, let’s just give it away. That itself is socialism. … We’ve had enough of that. Look at Washington, D.C. It’s all look at me… We shouldn’t follow the rules and just do what we want? That’s how we get $1.3 trillion debt.”

Greene disagreed with the way Church represented him. He said that in voting for Ron Paul, he wasn’t trying to make a name for himself. He was voting his conscience, voting for a Republican, and following the Constitution. Keeping him out for that, he reiterated, would set a dangerous precedent.

Ultimately, the delegates present voted to not allow Greene to be a delegate.

Many people commented on Facebook about the decision regarding Bill Greene, angry about their party’s actions. One person wrote: “After all of these years, Republican Party is still shady as hell when it come to creating Delegate Slates…”

Greene told Heavy that what happened was not representative of the Republican grassroots in Texas, and the people who chose him at the 2016 convention and who voted for him in the 2016 election. Church, he said, “had a personal political vendetta against me for refusing to bow to the demands of the party ‘elite.'”

“I am saddened — though not surprised — that a majority of those few delegates present failed to see that I did absolutely nothing that violated either the rules or the principles of the Republican Party of Texas.”

Hidalgo County Republican Members Have Told Greene He Might Be ‘Antifa’

Greene has also been told on more than one occasion that his vote for Ron Paul could indicate that he might be working for Antifa.

At around 34:00 into the video shared earlier in this article, one member of the SD 27 meeting stood up and voiced his strong dissent against Bill Greene’s being a delegate. “Who knows if he has a secret agenda (and is) Antifa or any other organization,” he said. “We have to be careful.”

Greene said that about a week later, when talking with a local Hidalgo County GOP member on Facebook, he was told the same thing again.

“It was right for us to remove you as a delegate to the Republican Party of Texas state convention, because you didn’t vote for the Republican in the Electoral College,” she said in a Facebook conversation, Greene shared. “We need party loyalty. You might secretly be Antifa.”

She later said that she believed they needed to bind electors, and blocked him, so he was unable to get screenshots of the conversation for Heavy.

This isn’t the first time some Republicans have used allegations of Antifa connections against voices of dissent to try to question motives, and you can sometimes see the same thing with Democrats and allegations of Russia connections during disagreements about establishment policies.

Despite what happened, Bill Greene has said that he will still be attending the Republican Texas state convention, as his wife’s guest. But he also told Heavy that he believes that what happened to him points to a larger issue within the GOP, and he regrets voting for the Hidalgo County Chair, who ultimately backed Church’s call to not let Greene be a delegate. This, he told Heavy, is why the County can’t get enough delegates to fill all their seats, but it’s also a symptom of even greater issues facing the GOP in the future.

“I’ve been active in the Republican Party longer than most of them there that day (at the SD 27 meeting) have even been voting, having served as a Precinct Chair, on the County Executive Committee, on the District Executive Committee, and on the State Executive Committee; I attended many many many County and State Conventions, and four National Conventions; I ran as a Republican for City Council, State House, and U.S. Congress; and I’ve voted in GOP primaries since I started voting,” Greene told Heavy. “I even voted for a Republican in the Electoral College — just not the ‘Republican’ that Denny Church and his ilk incorrectly insisted I was ‘required’ to vote for… I’m glad there were a few there that day who spoke out against this man’s asinine behavior, but to put it simply: it’s people like (this) who will spell the death of the Republican Party.”

Heavy is speaking with the Hidalgo County GOP and may have a comment to add to this story soon. 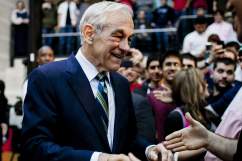 Loading more stories
wpDiscuz
0
0
Would love your thoughts, please comment.x
()
x
| Reply
Bill Greene, the elector who voted for Ron Paul, was ousted as a district Republican delegate for his vote, and told he might secretly be Antifa.