Getty Stacey Abrams and Brian Kent are the Democratic and Republican candidates for governor in Georgia.

Brian Kemp locked up the Republican nomination for Georgia governor, and the early polls show he is in a close race with Democratic nominee Stacey Abrams. There is limited data available, but Survey USA released polls for Abrams potential opponents prior to Kemp winning the GOP nod. There is still plenty of time for the race to take shape before the November 6, 2018 election.

According to the Survey USA poll, Kemp has a two percentage point lead on Abrams. The WXIX-TV/Survey USA poll showed Casey Cagle was also ahead of Abrams in a potential race. After his victory over Cagle, Kemp turned his attention to his new opponent.

“Make no mistake: There’s a crystal clear contrast as we go forward,” Kemp told the Atlanta Journal-Constitution. “This is a fight against Stacey Abrams and her radical backers.”

President Donald Trump wasted no time going after Abrams as well, sending out a tweet after Kemp sealed the win.

“Congratulations to Brian Kemp on your very big win in Georgia last night. Wow, 69-30, those are big numbers. Now go win against the open border, crime loving opponent that the Democrats have given you. She is weak on Vets, the Military and the 2nd Amendment. Win!” Trump tweeted.

As the early polls show, Abrams has a chance to challenge Kemp as she attempts to flip a traditionally red state to blue. Republican Nathan Deal defeated Jason Carter by eight percentage points in 2014 (53 to 45 percent), and Georgia could be in for an even closer race in 2018. Abrams has a chance to make history as the first African-American woman governor in the United States, and the first Democratic governor of Georgia since 1998. After Abrams secured the Democratic nomination, Time spoke about the impact a potential Abrams victory could have on American politics, and the strategy of the Democratic party going forward.

If Abrams can win the general election and become the first black woman governor in U.S. History, in a Southern state that sits in the heart of the old Confederacy, it will be a powerful symbol of the capacity of black women to be the face — and not just the backbone or helpmate — of American politics. This might prove the most crucial outcome of an Abrams’ victory. Since 2016, the Democratic Party has had an ongoing debate about whether to try to win over white working class voters or focus on the base of the New American Majority. A definitive Abrams win in the general election could settle that dispute for the 2020 cycle.

The early poll results show a gender divide among voters. Men favored Kemp by 15 percentage points in the Survey USA poll, while Abrams has a 9 point edge among women voters. With the Kemp-Abrams race officially set, there are sure to be more polls released in the coming weeks.

The WXIA-TV/Survey USA poll was conducted July 15-19, and has a margin of error of 4.3 points

The Mason-Dixon poll was conducted on February 20-23, and has a margin of error of 4 percent. 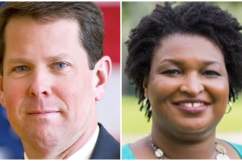 Brian Kemp & Stacey Abrams: What You Need to Know

Loading more stories
wpDiscuz
0
0
Would love your thoughts, please comment.x
()
x
| Reply
Brian Kemp will take on Stacey Abrams in the race for Georgia governor. Take a look at the early poll results in what projects to be a close race.