Wildfires broke out in Greece on Monday afternoon, consuming neighborhoods and claiming the lives of at least 80 people. More than 200 people have been injured and more than 1,500 homes and other structures have been destroyed. A state of emergency has been declared in Attica, a region located in southern Greece.

With above average temperatures, very dry conditions, and high wind gusts, the fires have spread rapidly, not easily contained. Authorities have been referring to these fires as “arson,” and do believe that at least some of them were intentionally started, since several started around the exact same time. A criminal investigation is underway.

“Supreme Court Prosecutor Xeni Dimitriou has ordered an investigation into the causes of the fire. Government spokesman Tzanakopoulos suggested Tuesday that the Attica blazes could have been started deliberately and said that Greece had requested drones from the US to detect any ‘suspicious activity.’ Hundreds of people have fled their homes, many running to the sea to escape the flames,” CNN reports.

Below is a map where the wildfires are located.

More than 280 firefighters have been battling the flames. Water has also been dropped by helicopter to help keep the fire at bay.

“I saw dead people. I saw at least 300 cars burned. I saw the burned houses. There is no such settlement anymore. We are trying to function in another reality because two settlements, Mati and Kokkino Limanaki (just south of Mati), have disappeared. They have been lost on the map. It has changed the landscape. We live another reality,” the mayor of Rafina-Pikermi, Evangelos Bournos told CNN. The number of deceased is expected to rise as rescue efforts continue throughout the rest of the week.

People have been sharing some of the most shocking, heartbreaking photos of the fires and the destruction left behind on social media. You can see some of them below.

“The country is going through an unspeakable tragedy. Today, Greece is mourning and we are declaring three days of national mourning in the memory of those who perished,” Greece’s prime minister Alexis Tsipras said during a television broadcast.

According to the Daily Mail, “10 tourists drowned when a boat capsized trying to rescue them from gale-driven forest fires.” People who had been running to the nearby sea for refuge died along the way. The Daily Mail specifically mentions one family with children who were found “clasped in a last embrace.”

A website has been set up to share photos of relatives, friends, and loved ones who are missing. You can visit that site here. 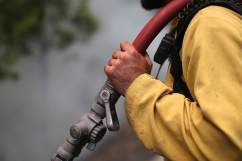 Loading more stories
wpDiscuz
0
0
Would love your thoughts, please comment.x
()
x
| Reply
Fires in Mati, Greece, have consumed neighborhoods and cars, and are responsible for the deaths of at least 80 people.